The Lock is Not the Focus

[November 2012] We have seen a lot of pictures relating to the fences and locks used – or not used – by stations. But how secure is a tower base required to be? The answer may surprise you a bit..

Section 73.49 of the FCC Rules and Regulations requires stations to provide a locked fence at the base of towers where RF potential is present.

The fence can be immediately around the towers or around the entire tower field. The main point is to protect the public from RF energy.

In past installments, we have seen fences with missing pieces, gates without locks, and even a tie-wrap for holding a chain together.

This time, we are invited to take a look at a gate in use at a station in Georgia. 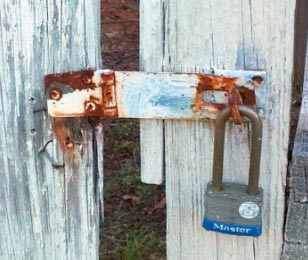 Yes, there is a lock on this gate

Ray Gorney kindly sent this picture, with the note that if one were to forget the key to the lock, a #2 Phillips screwdriver will work just as well. 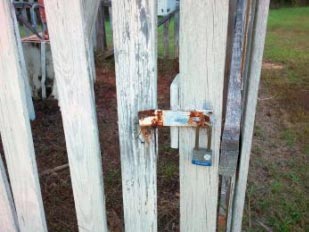 This gate can be opened by either of two ways

Now, here is the interesting part: just to be sure, we asked several inspectors from the FCC’s Alternate Broadcast Inspection Program (ABIP) to take a look and tell us whether or not this fence and gate would pass inspection. The answer was … yes.

The consensus was that the Rules do not say a locked fence must be impregnable – just that it must be locked.

By the way, in case you were wondering, this station had all its gear in a locked weather-proof cabinet, so the only potential exposure to theft was the coax running to the tower.

About the Fence, Gate, and Lock

One inspector noted that he had been at a station where the tower fence actually did not have a gate at all, just a three-foot fence that he merely stepped over. After a discussion with the FCC, such a fence was deemed OK as it serves its purpose: to keep children and the general public from areas with excessive RF potentials.

As you can readily see, it is not true complete and total security that is the object of the rule.

A station is not required to lock down access to the tower to make it totally impossible. After all, a determined bad guy will be able to penetrate most any fence. Whether a copper thief of BASE jumper, if they want in they will get in, perhaps climbing over the fence, perhaps using cutters or other tools to break in.

Instead, the station’s responsibility to the FCC is just to prevent casual access by the general public to high RF levels, mainly potential RF burns or shocks from voltage at the tower base.

However, a caution: compliance with the FCC Rules does not negate local laws and/or insurance company requirements for more substantial fencing and/or locks on the gates to prevent theft, vandalism, or liability from the unauthorized ability to climb a tower. It is important to be sure your site complies with all local laws.

It is not our intention to embarrass anyone, but to realize that doing everything perfectly is not always possible. Nevertheless, after we chuckle a bit, it does remind us to check out our own facilities.