The Tower Leg that Just “Melted”

When this set of pictures was first posted on the Internet, it was hard to believe that the tower involved had not just collapsed and caused all sorts of problems. It was, however, a poster child for so many towers where there have been no regular inspections or maintenance programs.

Don Barber of L&S Enterprises in Titusville, FL was the source for these pictures. His crew was sent out to change the configuration of the double unipole antenna that was mounted on a 302- foot tower, along with some work to paint the tower and replace the wiring for the obstruction lights. But, as Don said: “It all came to a halt quickly.”

As Barber’s workers approached the 250-foot level, they were somewhat startled at to see a situation that you could only describe as “hard to believe.” 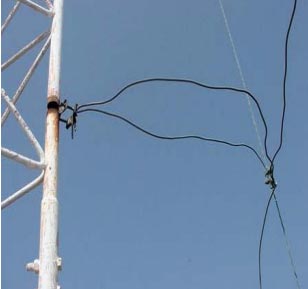 As the climber got closer, the view became even less appetizing. It indeed was what he thought he had seen – a rather nasty gap in the leg. 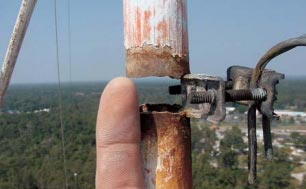 This tower leg wasn’t designed to have a window

As you can see from the condition of the tower and paint, over a long period of time, something “ate away” the metal.

Obviously, the electrochemical reaction, aided by the pull of the unipole supporting wires did a good imitation of a hot knife going through butter.

By the time when these pictures were taken, only the bracket itself was holding the tower leg in place. 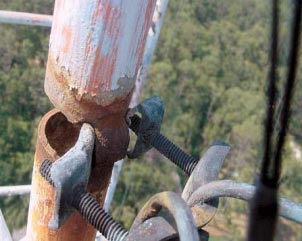 Only a tiny, buckled bit of the tower remained

It was only a small gap, obviously hard to see from ground level. But with only a tiny, buckled bit of the tower leg remaining, the gap would have been more than large enough to bring the whole tower down if any stress from high winds, for example, had occurred.

Just imagine if you were on that tower and came to that spot.

Barber relates that the climber stopped what he was doing and got off the tower immediately. Repairs to the tower were carried out shortly thereafter, and at last report, the structure was stable.

The reason to show these pictures is to provide a vivid, visual reason to show why it is important to schedule regular inspections of all your towers. Clearly, it would not have taken much longer before this station would have been off the air for a significant period of time.

Remember it is a “tower system.” Each of the members is important, from the steel itself to the insulators, guy wires, and anchors.

The basic lesson is to ensure someone regularly takes the time to do a good inspection of each tower in your care. Develop a checklist – or check out this article and hire a good tower crew to do a thorough inspection

It is not our intention to embarrass anyone but to realize that doing everything perfectly is not always possible. Nevertheless, after we chuckle a bit, it does remind us to check out our own facilities.