The Story Behind: “Transcribed”

[May 2020] There are a lot of terms we rarely hear any more, or that no longer reflect their original meanings. If you listen to an old radio show, you may well hear the announcer say at the beginning: “Transcribed.” Here is why.

Today, the term “transcribed” is well understood to mean that some speech, program or phone call has been converted to text.

Sometimes, transcription is a process that now can even be automated, although if you carefully watch those closed captions on TV, you still might not fully understand what was being said!

Nevertheless, in the early days of the last century, the word transcribed had a different meaning for broadcasters and listeners.

Programs at the Right Time

In the late 1920’s, long before tape recorders, digital delay, and computer playout options, the radio networks needed a way to have their programs run at the proper time in each time zone.

Originally, all of the programs were performed live – sometimes twice (or more). The main reason was that those on the West Coast would want to have the program start three hours later than it was originally broadcast, to account for the time zone differences.

Of course, that could get expensive: paying stars, announcers, musicians, and support staff for all the extra time.

The solution – remember, this was long before tape recording was invented and brought to the US – was to “cut” the program into acetate-based discs, generally called “electrical transcriptions” or ETs (no, nothing alien to see here.)

In general, the quality of these audio ETs was better than most vinyl consumer records of the time, as there was a lot less surface noise.

As you can imagine, it was quite an operation at those key stations which were making and/or playing the ETs.

The control room would have two or more ET machines, to handle the longer programs. To ensure that breakdowns or other issues would not cause only part of a program to be recorded and played, there might even be four of the ET machines ready for action.

One of the most popular brands of engraver (or cutter) machines used, right up into the 1960s for spots and early releases of new songs for radio stations was the Presto Sound Recording equipment. It used the acetate-based discs. 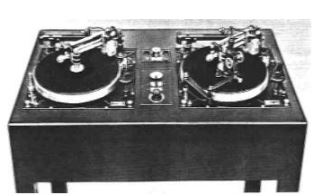 While, that arrangement and capacity might work fine for a short program, it would normally take at least four discs for an hour-long program.

Additionally, the technology of the time meant that there was a noticeable effect on the frequency response between the outside grooves of an ET and the inside grooves – considering that the needle covered several times the distance in the outer grooves per revolution, compared to the inner grooves.

The solution for that time was, using several ET cutting turntables in a master control room, to have every other one “start” from the inside so the grooves would lead the needle toward the outer rim. That way, upon playback, the audio quality would not change in a noticeable way at the changeover between two ETs. However, the operator had to be very careful not to put the needle on the wrong part of the disc.

By the end of the 1920s, ETs were commonly used for recording programs ahead of time, repeats, and/or for distribution to stations around the country.

According to some accounts, The Amos and Andy Show out of Chicago may have been the first to distribute its program via ET to other stations. Other stations and programs followed, and the networks used ETs to, as noted above, delay live programs for the West Coast.

In short order, a number of companies were formed to make ETs for broadcast. In addition to network programs, orchestral and popular bands were recorded and distributed to stations. Entire libraries of material were leased to stations, especially smaller ones, to fill the broadcast day.

However, when any non-live program was started, stations were required to announce that fact.

This was to prevent confusion on the part of listeners who might not realize what they heard was not “live.” Thus, the local announcer would introduce a program by saying: “The following (or preceding) program was transcribed for presentation at this time.”

Did They Hear It?

Likely listeners more or less understood the concept as they went along.

But, over time, whether it was listeners on the East Coast listening to a pre-recorded program (to use the modern term, although exactly how you would “pre-record” is sort of a grammatical issue) or West Coast listeners hearing a program delayed from earlier that evening, the word “transcribed” sort of began to be spoken quickly, perhaps like the typical air travel instructions rattled off by flight attendants.

In other words, it became part of the background noise.

This lack of emphasis paid to these announcements by stations – and listeners – might best be summed up with the confusion some people felt when listening to Orson Welles famous “War of the Worlds” broadcast on Halloween night of 1939. Despite several disclaimers, a number of listeners thought it was live.

The Term Stayed a While

Although rarely heard these days, even well after tape recordings came into play for delaying the broadcasts, networks and stations tended to use the word “transcribed” just before the start of the program to indicate it was not live.

Sometimes, to make sure there was no slip-up, stations would schedule a periodic announcement – often shown on program logs as “MRA” or Mechanical Reproduction Announcement – that “some programs broadcast on (station) are transcribed” or “Portions of the following are transcribed.” Occasionally, it can still be heard.

There still is a Rule – 73.1208 – saying, in part: “Any taped, filmed or recorded program material in which time is of special significance, or by which an affirmative attempt is made to create the impression that it is occurring simultaneously with the broadcast, shall be announced at the beginning as taped, filmed or recorded. The language of the announcement shall be clear and in terms commonly understood by the public.”

In the end, since the term now generally has a different meaning to most people, “Transcribed” is not used very much anymore.