The Quest for AM Improvement: A Conversation with Commission Pai

[September 2014] AM station operators are hoping that something will happen at the FCC – sooner rather than later – in the quest to improve the AM band. Is it a realistic hope? Read on, and listen, for yourself.

AM is not quite dead yet.

Although there are those that think we would all be better off by abandoning “Ancient Modulation,” there are still many AM stations out there trying to deliver a quality signal and serve their communities. They have to fight both manmade RFI and FCC Rules that are outdated and stifle efforts to improve facilities.

Solution Could Be Quick

The FCC could – tomorrow, if they really wanted to do so – grant PSA authority to all Daytime stations. The technical arguments are no trickier than those advanced to allow HD Radio or, as it is also known: IBOC (or, actually, IBAC – “In Band, Adjacent Channel”).

Five hundred Pre-Sunrise Watts at 5AM or 6AM will not cause significant harm to anyone, yet the ability of small, local stations to broadcast school closings, for example, would be a greater good, it would be a real, Public Service. Sadly, there is no money in it for lobbyists or investors in these days, where most everything is driven by money and/or politics,

Similar arguments relate to Post Sunset operations. Again, 500 Watts until 6 PM – and perhaps something lower for the next few hours, would financially save many stations running school sports.

The Ratchet Rule, Part 15 RFI, aural bandwidth, and more, are among the roadblocks in the way of AM improvement.

Talking to the FCC

A dialog, of sorts, has emerged in the past couple of years as Commissioner Ajit Pai has taken on the need for the FCC to help AM operators.

More and more, stations and their owners are speaking up, too, encouraged by Commissioner Pai’s words. They hope for more than words, but so far, aside from an NPRM seeking comments from the public, little has actually reached the full Commission for action. A promise to create another lottery windfall on FM translators for AM stations is, not surprisingly, about the only tangible result so far.

Meanwhile, Commissioner Pai has appeared at national and regional conventions, written articles, and has been interviewed a number of times, fittingly by AM stations. There has been a lot of applause but, ultimately, questions arise as to the status of various petitions and proceedings at the FCC that have been “sitting” for a decade – or longer. This has led to a lot of frustration, especially on the part of small market operators, some of whom have started speaking out. 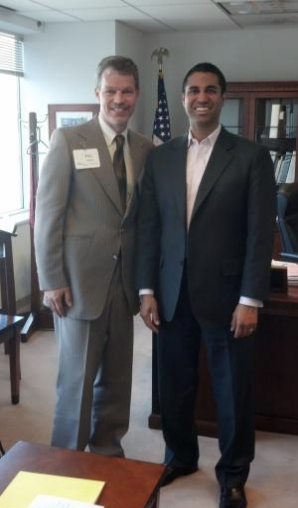 One such AM station is owned by Brian Winnekins in Durand, Wisconsin. The owner of WRDN (1430) was not satisfied with the slow pace of progress, so he personally has engaged with Pai several times, including by taking a trip to Washington, DC, last year to speak with him in his office.

But, more than that, Winnekins has kept up the contact and dialog. Most recently (on September 17th), Winnekins interviewed Pai regarding the status, where things now stand on AM Improvement at the FCC. You can listen to the interchange here.

What You Can Do

The official comment period for the NPRM on AM Improvement is over, but you can read the comments that have been filed at the FCC on the ECFS page, check Docket 13-249 here.

You can also continue to write personal letters and make calls to all the Commissioners and their aides, asking that they take up the cause of AM Improvement as quickly as possible.

Winnekins especially is encouraging folks to send letters directly to FCC Chairman Wheeler asking him to put AM Improvement on the official FCC Agenda as soon as possible. Make your voice heard by sending your request to: