[August 2014] This is another in a series of pictures that gives us a chance to look and think. What do you see here?

Unless specifically engineered and licensed for directional operation, FM licenses are assumed to be non-directional.

However, as many engineers know, and others have found out, that is not always true. That is why pattern testing at the factory is usually a good idea, so the station has a good idea of how antenna coverage will look.

Pictured here is a fairly recent FM installation in a rural area. It is a non-directional antenna, running under 900 Watts TPO. 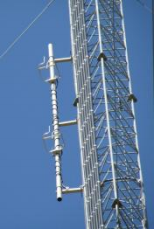 This picture was taken from the East side of the transmission site.

The antenna is mounted on the leg facing to the Southwest.

At first, it does not look too bad.

But, would it help to note that the City of License is about a half-dozen miles to the East?

And that the signal is not as good there as one might hope?

Or that the main highway to the North has almost no signal at all?

The reader who sent this is works for a company that recently purchased the station. Yes, we can assume that plans are already in progress to remount the antenna.

As we have repeatedly point out, the goal of these pictures is not to embarrass anyone but, instead, to highlight situations and practices in a way we can learn from them.