[November 2010] This is another in a continuing series. As we have mentioned many times, the goal is not to embarrass anyone – in fact, we often will not reveal where these place are located – but to help learn from things often overlooked or the mistakes of others. Your pictures and comments are sought.

This time we have some new pictures taken at the base of one of the towers in a AM station’s directional array. They put on display one of the most common issues we see: what is inside the tower fence.

Many stations will hire landscapers to come out and carefully (we hope) cut the grass, plants, etc., in the tower field. (Beware of a landscaper who might suggest “scraping” the field. All too often the result will be broken or missing radials!) But rarely will they do anything inside the tower fences. 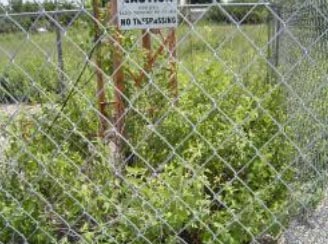 It looks like there is a bit of a jungle in there!

Part of it is the physical danger – after all, the towers are electrically hot. That is why the fences are there in the first place, that and the need to avoid the potential problems and liabilities if some intruder climbs up the tower.

Another reason areas inside the fence often fail to get the necessary attention is the time involved. It is not always easy to use a mower inside a tower fence, even if there is enough room. And some managers will not pay for the landscapers to go in there anyway. That leaves the engineer to play gardener.

Why It Is Important

Keeping the local flora inside the tower fence to a minimum is very important for several reasons. First of all, it keeps the local fauna from making nests and creating a larger family.

Anyone who has been bit – or close to being bit – by an animal knows how important it is to keep sites (both inside and out) clean and clear. The last thing you need is to get a nasty bite in the middle of the night when no help is available nearby.

Electronically, there is the potential for the growths to get into the lightning gap, or worse, create a sort of ground path for the RF being fed to the tower. 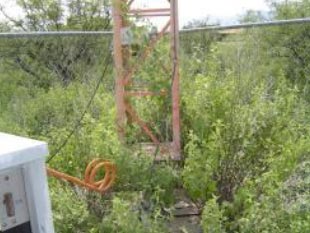 Eventually, when there is enough growth, it can even shunt power to ground

That was essentially what brought the engineer out to this site. The directional pattern was askew, and the monitor readings were not what they should be. Once he had toured the entire site, the engineer had a pretty good idea of the problem – and the most effective solution.

No. this engineer did not start turning the cranks to bring the array back to “normal.” Instead, he cut the brushes, weeds, etc. And, he tells us that as soon as the weeds and shrubbery were pulled back, the array went to normal. 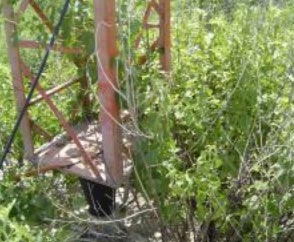 No question – it was a jungle in there

In fact, in only a slightly facetious way, the engineer concluded, “It seems engineers should keep a set of pruning shears and a weed eater on hand when in the field.”

By the way, we did not ask and therefore do not know whether there is a requirement for tower painting and lighting. But if there is, it would appear the paint is long gone. At the least, it exposes the tower itself to deterioration.