[June 2011] FCC Rules require that broadcast stations receive and log two EAS tests a week, and send and log one test a week. For the past 14 years, strips and rolls of paper have been part of the documentation proving compliance. At least that is true for most stations.

One of the ABIP inspectors sent the following picture to us. It was from a station that was hoping to receive a compliance certificate for passing the inspection.

When the inspector asked to see the station’s EAS logs, they were shown to tub in a back room filled with strips of paper. “We don’t keep a log, but we do keep all the receipts…” was what they told the inspector, who was expected to look at the slips. Or, perhaps not. 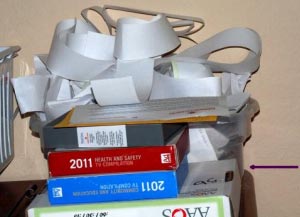 The arrow points to the bottom of the tub

You might think that this was at least a record of some sort. There were just two problems: First, according to station staff, “the ink ran out on the printer sometime last year …”

In fact, the strips in the tub were not really clearly legible at all. In fact, they ranged from very faint (the middle strip) to the completely blank (on the left). (The paper on the right is shown by way of contrast.) 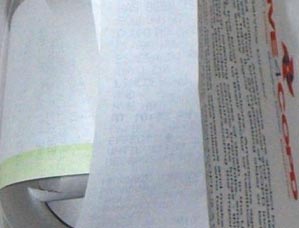 The pile of slips was pretty close to worthless

A little more questioning and it developed that the ribbon cartridge had been removed, merely sitting on the printer. Apparently, the plan was to soak the ribbon in something so it would print again. Someday… 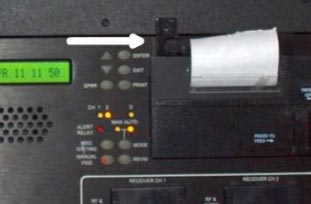 Perhaps the charitable way to finish this is to say the station did not pass the inspection. The inspector asked for them to send copies of the log for the past couple of months. As far as we know, they are still squinting.

Do you have any pictures of some part of a broadcast facility that just takes your breath away? Please share them with us. It is not necessary to identify the facility – our goal is not to embarrass, but help others see from these examples how to avoid problems. Send your pictures (or ideas) to: BDR-Editor@theBDR.net Thanks in advance!