Part A into Part B – Interesting Fits

[June 2011] When you are far from any supplier, getting a station back on the air can be a special challenge. Just accomplishing that much can save the day, but mystify onlookers. This file has been updated with a new submission. Interestingly, both stations are from the same general area.

Terry Cowan saw the original picture, and sent this one to share. “I took this picture several years ago in the Caribbean,” he writes. “The station was a Class A and, at the time, was running around 300 W TPO.” 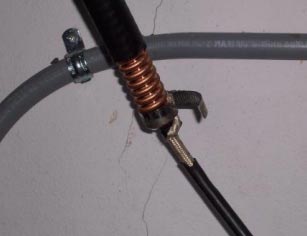 One can only look at this and, if not admire the mating of these two types of coax, at least respect that the guy probably had no Radio Shack nearby.

And the hose clamp did provide for a reasonably stable ground connection.

Second Verse, Same as the First

This next picture was the one Cowan saw that reminded him of his Caribbean trip. Also in the Caribbean, Craig Bowman took this one was at a station normally running a PT-20.

The main transmitter was off the air, as was the auxiliary transmitter. When Bowman arrived, a Crown 150 translator had been “fitted” to the feed line to put a signal on the air.

At first look, Bowman was stunned at the connection. 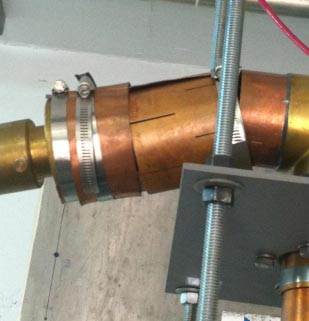 The transmitter was connected to the rigid line via a series of bullets, reducers, adapters, and covers. It was almost worthy of a Rube Goldberg award.

But again, just as with the one Cowan saw, in the end, Bowman had to acknowledge the local guy had actually done a good job in getting the RF to the antenna. The station was on the air!

A Little Closer to Home

At first, this one next one looks just a little bit like a Rube Goldberg affair. 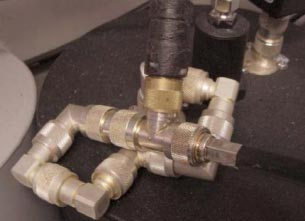 The picture was taken at a mountaintop transmitter site where several two-way antennas were in close proximity and, according to the engineer, the feed line shown needed some attenuation.

Since each connector will cause a small insertion loss, it is possibly understandable that the engineer felt he had to use every connector in his toolbox to bring the RF down.

But it also seems the concept sort of got away from him – it is a bit puzzling that he never got rid of the connectors and installed a proper RF attenuator.

A closing note: We definitely are not endorsing this sort of “plumbing,” but so long as the transmitter match was reasonably close, you almost have to admire the ingenuity that put it together.