The Auxiliary Antenna that Wasn’t

[March 2010] Among other meanings, the dictionary defines “auxiliary” as “additional,” “reserve,” or “substitute.”Many stations maintain auxiliary transmitters, and some even have auxiliary antennas. The auxiliary usually is there to keep a station on the air in case the Main fails.

Broadcast equipment is much more reliable than ever. Some of the solid-state transmitters seem to run for years without any maintenance, some antennas are used for decades. Unfortunately, because of the budget crunches many face, a number of stations use such reliability as an excuse to avoid maintenance until there is a failure, taking them off the air.

That is one reason why, as a part of the maintenance process, it is important to know that each piece of equipment used in your plant – Main and Auxiliary – is ready to go when needed. All of the possible modes should be tested from time to time – that sort of wise maintenance practice will prevent most of the nasty surprises that can happen.

But, even when there is a maintenance program, things can and do happen.

John Dehnel shares this experience with us. “We recently tried to switch on to KRSP-FM’s auxiliary antenna. It would not work.

“After investigating we found out why.” 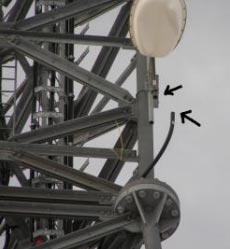 The line to this aux antenna was not continuous

“The pictures show our little problem. Now, look closely! Is that KRSPs signal coming out of the ripped-out feedline?” 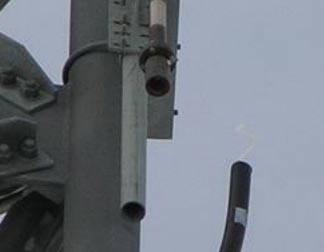 Look closely; it almost looks like the RF is trying to escape

“Actually it was a jet stream from an airplane passing overhead. Right place, right time!”

Amazing, is it not?

Dehnel relates that although they do not know exactly when the cable was pulled out of the connector, the antenna was tested not long ago. On the other hand, reviewing the possibilities – including ice on the tower – there was a clue. 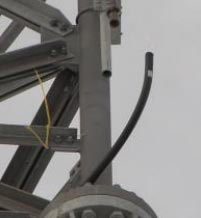 Just to the left of the coax, you will notice some yellow rope attached to the tower. As Dehnel points out: “… there had recently been some climbers on the tower removing a retired VHF television antenna which was mounted above the FM. They may have stepped on it. We don’t know for sure. … But the yellow rope is suspicious.”

While most climbers are careful, accidents can happen, especially on crowded towers. A misplaced foot, a dropped tool, etc, can easily damage something that is unrelated to the work being done. In situations where something is not used regularly – like an auxiliary antenna – it might be months (or more!) before the problem is even detected.

Reminders like this remind us all that we should schedule regular, routine inspections of even the least-used parts of our facility. You never know what you will find, but it sure could save you from unexpected problems when you least need additional things to worry about.