How Not to Bond Copper Strap

[March 2010] Time and experience repeatedly prove that having a good, solid station ground is essential for both a reliable transmitter system and for clean audio.

Therefore you can imagine the consternation of the engineer who came upon this example of bonding copper strap: 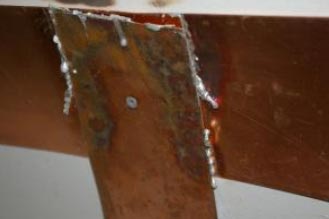 He reports: “I have to wonder just what were they thinking? I found a station here with the four-inch ground straps soft-soldered to each other – sort of. I think they actually used a 40 Watt soldering iron to melt the solder onto the copper. I peeled it off with fingers/pliers.”

Shortly after taking this picture, the connection was redone properly with silver solder.

As is often the case, the station and engineers involved will remain nameless. The object of this series is not to embarrass anyone, but to provide reminders and suggestions about areas where potential problems could cause use trouble – especially in plants we “inherit” after they were built by someone else. So, have a short chuckle, but then take a look around to make sure nothing at your site qualifies as “The Worst I’ve Even Seen!”