The ABIP – Can It Be Saved? Part 2 – A Good Program Threatened

[February 2019] The Alternative Broadcast Inspection Program (ABIP) has issued thousands of certificates of compliance to stations voluntarily being inspected. Yet, there are some real impediments to participation – often by the very stations that could use the program.

What happened? Ken Benner, who was there at the beginning, has observed it all.

When the ABIP Program was set up, a larger number of stations jumped on it right away.

What was not to like? A supposedly qualified broadcast engineer would come to the station and spend the time to cover the FCC Self Inspection Checklist, answer any questions the local engineer and manager had, and if the station passed inspection, a certificate was issued that solemnized a promise of “no FCC Inspector will darken your doorway for three years.”

Today, the value once attributed to the Alternative FCC Compliance Certification Inspection Program under the state broadcasters’ associations has, in many cases, come under serious question.

In recent years, FCC Inspectors had found a large number of stations were in violation of the FCC Rules regarding such matters as proper tower lighting, tower painting, ground systems, EAS logging, the contents of the Public Information File, etc.

With that in mind, the original goal of the ABIP was to ensure a station was compliant with the Rules and would pass a formal FCC inspection.

By using the program, the stations got an assurance from the FCC that they would not conduct routine inspections at an ABIP inspected – and certified – station for up to three years.

This would remove a great deal of apprehension on the part of stations trying to follow all the Rules, but still worried that missing just one of them would lead them to an expensive path of fines and legal costs.

It seemed an especially good deal for smaller stations with smaller staffs. To not only ensure compliance, but to do so without fines and legal hassles, an ABIP seemed like the best “insurance” they could buy.

Many of the state programs, including the ones where I served as an inspector, included education, helping the stations identify problems and understand how to resolve them, so they could correct them and qualify for a certificate.

All-in-all, it was a win for everyone.

The station got a non-adversarial inspection, with a chance to fix any problems, the FCC got to reduce its staff of Field Inspectors, and the industry and country got reduced interference and cleaner operations, as stations stopped and checked their plant, item by item.

Over time, any number of stations were thrilled to have an FCC inspector announce himself at the front desk, be shown the ABIP certificate on the wall, and respond with “Have a good day!” as he turned and left the station. 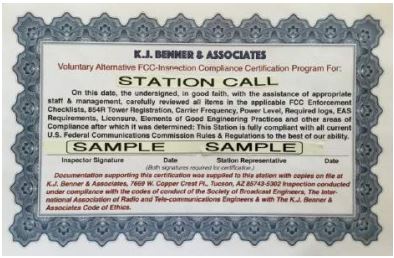 The insurance paid off!

No Longer An Easy Sell

You would think that every station would want to buy into the ABIP deal like that.

Yet, participation seemed to reach a point – and then stopped growing. As one who has quite likely conducted more such ABIP inspections than anyone else, I became concerned. Each cycle found me visiting some of the same stations, while driving past even more which were not participating.

I started to ask around, and found that there were some reasons for the current state of the ABIP and some relatively simple solutions.

At least it seems like there should be simple solutions, as indeed several state broadcast associations saw the same needs and worked hard to meet them.

On the other hand, as most all inspections were done through the various state broadcast associations, several competing goals began to come into conflict.

Most of the problems centered on the promises and the costs of the system.

Unfortunately, for some stations, the promise of freedom from inspection was somewhat oversold. Stations were usually told they were protected from any inspection.

But that was not quite true.

A “Sort of Promise”

In fact, the FCC could mount a full inspection if there was, for instance, interference from an obviously improper operation, such as failing to change transmitter power or directional patterns, or finding a daytime station still on the air after dark, with or without programming.

Also an inspector who could be driving through a town and saw a tower in bad condition (poor painting/poor lighting/poor fencing) could stop and conduct a more thorough inspection.

Or, a complaint alleging missing Public Information File contents or other violations of the station license – even if made by an angry ex-employee – could result in an inspector being sent to sort things out. There are other possible reasons, but these will suffice to show there really could be no complete “3-year shield” against FCC inspections.

Still, the promise of immunity from inspections continues to be promoted by some state broadcast associations, even as they used that promise as leverage to extract a lot of cash from participating stations. We will get to that issue shortly.

The Quality of Inspection

I have also become concerned about possible problems with some of the inspectors, who may have been recruited hastily to issue certificates.

In some cases, it appeared the main concern was to ensure that stations passed the inspection.

This concern began to develop when I learned of some stations that had been ABIP-inspected were subsequently visited by an FCC inspector and fined.

Part of the problem came from the conflicting demands placed on the ABIP inspectors.

Stations wanted the promise of the 3-year immunity, so some inspectors were told to ignore certain issues, such as the Political and EEO part of the Public Inspection File in order to help the inspection to be successful due to their extraordinary complexity.

You might automatically think “that cannot be true!” But, in some states it appeared that the association felt the whole program might fail if too many stations did not get certificates.

Meanwhile, anecdotal reports indicate the number of inspections indeed were going down in some areas – and among the reasons was one apparently a very important to station owners.

This brings us to the money issue.

Over the years, several different entities have tried – and some have succeeded – in turning the ABIP into a money-making project, charging substantially more than the wages paid to inspectors plus their travel expenses – and then even more for association non-members.

For example, you might think charging $500, plus travel expenses, was a bit much to inspect a small market Non-Directional AM or FM station – one that was already a dues-paying member of the state association.

Yet, in some states, the tab for a similar station that was not a dues-paying member was $1500, plus travel expenses – quite a bit for a small market station. My wife and I conducted dozens of certifications for only travel expenses.

But It Can Be More Expensive Yet

Now consider stations with multiple sites and TV stations can be charged $3,000-$5,000 each for an inspection. And in some states, the same inspector will then charge for helping correct any problems.

And on top of that, there were reports where a member of the Communications legal fraternity sought to collect $35.00 for each ABIP inspection as a retainer in the event legal ramifications developed as the result of some misstep by the inspector.

Just think about it: all this is for what was to be a simple program to implement an inspection that essentially just follows the FCC Self Inspection Checklist.

For those of you familiar with the program, perhaps you recall an item adopted by most state broadcasters associations that is required to be signed by both the inspector and the station licensee or his authorized representative. It is entitled Authorization and Indemnification for Conducting Alternative FCC Inspections.

This mutual agreement essentially said that no litigation, under any real or perceived circumstance shall ensue on behalf of the sponsoring broadcaster association, the station, or the assigned inspector as a result of this inspection. In other words, all parties agreed that everyone was putting forth a “Good Faith Effort” to do the ABIP as carefully and honestly as possible.

This item was developed on my word processor and its origin should be of interest to all licensees.

To explain: a “Good Faith” inspection could not account for stations that purposely sought to mislead the inspector – some going so far as to bring the station into compliance when the inspector was on site but, as soon as he left, return it to a non-compliant mode

To be sure – and in all fairness – it is not cheap to send an inspector out across a large state. Costs for hotels, food, and travel expenses can be substantial.

And, even if the inspector is local, his/her time is worth something.

Nevertheless, the Nevada Broadcasters’ Association provides an inspection for their members at no charge – it is included in their membership. And there are some inspectors who will do the ABIP free for non-comms and some others.

And several other states do ask only a couple of hundred dollars for the time and experience of an inspector to help them meet their FCC Rules and Regulations.

So, is there a fairer, more cost-effective way to inoculate radio and television from the awesome, frightful visit by an official Inspector from the Federal Communications Commission, complete with red-inked-pen and fine-leveling pad in hand.

We will explore that in the final part of this series.

Ken Benner, CBRE-Life, NARTE-Mastet-Life, has served as an inspector in the FCC’s Alternate Broadcast Inspection Program for the past 25 years, as well as the official pancake turned at breakfast meetings.

He does not claim to be a lawyer, nor play one on TV.