[April 2021] With commodity prices rising fast this year, unattended sites are vulnerable to theft and vandalism. Richard Rudman discusses another area of concern, so broadcasters can protect themselves.

It is an inevitable extension of the physical theft of copper ground radials at AM transmitter sites – and it has finally happened. Thieves are now stealing monitor point radials and reselling them on eBay.

Miles in length – and rarely more than an inch wide – these essential elements for AM directional array
FCC compliance are easy to steal. This makes them prime targets for any criminal with even a rudimentary knowledge of AM propagation.

We have been able document the theft of over 48,500 miles of radials just here in Southern California where the thefts first came to light. The Midwest and Northeast, so far unaffected, will likely experience this type of crime in late spring with the onset of warmer weather.

Because stations are not discovering these thefts until some time after the fact, there is a strong likelihood that the bolder and more ambitious criminals who are stealing radials will now go after the longer radials belonging to 50 kW directional arrays as well as go for radials much closer to all transmitter sites.

Brazenly operating even in broad daylight, AM directional radial thieves have easy access to monitor point radials with virtually no shred of security in place to stop them.

It is still somewhat of a mystery how the thieves manage the actual deed.

However, there is some very strong evidence, based on a series of reports about rushing air sounds and screeching tires, that radials are being harvested using road sweeper vacuums such as the one pictured here.

Since monitor point radials are almost never secured to the ground, the radials are quite vulnerable to the vacuum collection method. 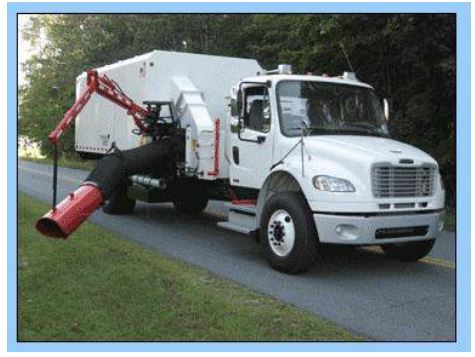 While the FCC’s 47 CFR Part 73.61 describes what directional AM licensees must do regarding making field strength monitor point measurements on specified radials, the Rules are completely silent on what licensees must do to protect them.

We should all be on the lookout for attempts made by these criminals to sell AM radials. Using clever means to disguise their true identities, radial thieves have successfully presented and peddled their ill-got wares on eBay. A typical listing looks like this: 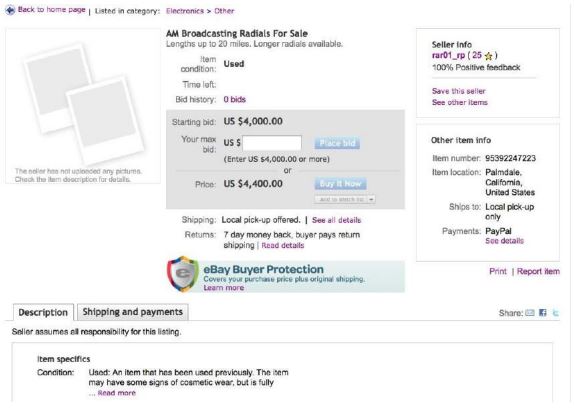 Now the good news. Licensees now have proper hardware available to solidly secure their radials to the ground, thereby making radial thievery much harder, and by implication, less profitable and more risky for radial robbers.

A new company, Cricket Communications, LLC, has brought to market a securing device they call the Sticky Wicket®. The design is simplicity itself. A four-foot length of ordinary rebar is formed into a “U” shape. A proprietary technology then fashions a series of 2-inch jagged barbs along the length of each leg of the “U.” Licensees just have to pound these fastening devices into the ground every 20 – 30 feet to protect their radials.

Because of the jagged barbs, these fasteners make vacuum radial collection impossible. The company is also offering a pneumatic wicket driver (PWD) they will market as the Sticky Wicket Stapler® that will make installation easier in hard or paved ground. By mid-year they plan to offer a new version of Sticky Wickets®, the basic rebar device, but fabricated in hard drawn copper. The obvious side benefit of what they will market as the Copper Stopper® is a significant improvement in ground conductivity along AM directional radials. The original version is now available in boxcar load lots delivered to the railroad siding of your choice.

Another approach being developed is to put identification marks on all of your radials so if they are stolen and eventually recovered, the legal owner can be identified. There is a rumor that the Brady label company will soon have a line of shrink wrap ID tags pre-printed with the station’s FCC facility number.

Furthermore, one of the best ways to make many types of theft unprofitable may be to legalize the sale of goods that are being sold on the black market.

Thus, it occurs to us that poor stations that cannot afford to have a bad radial re-run or have the engineering done for Method of Moments (MoM) operation should be able to legally buy and install a good surplus radial. For example, there may be stations that have an extra 20 to 500 miles of radials lying around and could therefore profit from this. In these challenging economic times for AM radio, FCC legalization of the sale of sections of radials longer than 20 miles might be a good idea.

Stations impacted by adjacent channel HD interference that have lost coverage beyond 20 miles could pick up a quick dollar or two if we petition the FCC for a simple change to the AM Rules. The purchaser would of course be required to pick up the good radial they buy and install it using well-established standards of good engineering practice.

It is hard to say what the price point should be for this proposed RF equivalent of carbon exchange, but I would propose $200/mile as a starting point for negotiations.

Richard A. Rudman, CPBE, CAFW* has extensive experience trying to prevent the loss of radials during his many years in the Los Angeles market, even proposing at one time that stations use a special EAS code – COPPER (Call On Police to Protect Electronic Radials) – to seek public assistance in locating the road sweeper vacuum rigs. If you detect missing radials in your area, you can help by emailing Richard about them at rar01@mac.com