Sometimes the Nest is Not Empty

[April 2012] Not every problem is electronic or mechanical. Even with the best of plans things happen that cannot be anticipated. And, sometimes, there is nothing you can do but wait it out.

It was not supposed to be a big deal. WURI in Manteo, NC needed to do some repairs and update their main 6-bay antenna and feed harness.

So, Chief Engineer John Francioni called SCMS to arrange for the tower crew to take the antenna down and send it back to the factory for a complete overhaul. They fired up their 2-bay auxiliary antenna for the short time it would take.

However, as often happens, while the antenna was away, the local fauna decided to enter the picture and play.

What is That Up There?

A few weeks later, the tower crew returned and got ready to replace the bent mast and reinstall the antenna.

As they assembled on the ground, the crew developed their plan of attack for the job. And that is where things went just a bit a bit off the rails.

As the tower crew looked up to survey the site, the mast, and the area where they would be securing the rigging, they discovered an interloper.

Something had taken up residence. 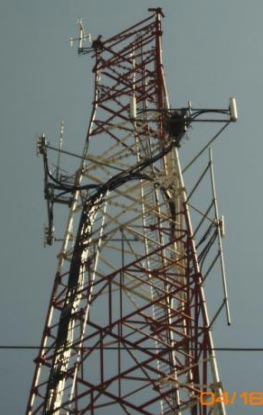 It was a birds’ nest, complete with eggs. 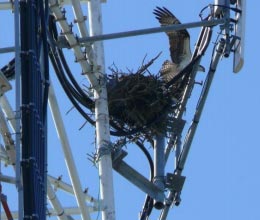 You probably already have guessed where this is going. The bird is an Osprey which, although it does not seem to be protected, however, did prompt the wildlife people to tell the station all work had to stop.

“We cannot disturb the nest according to the Park Service and must wait until they hatch and vacate,” Francioni says.

“It seems that the rigging to do the work will be above the nest and the ropes will destroy the nest while the work is being done. So we must wait until the birds vacate to move forward on the antenna.”

So, for the time being, WURI continues on the 2-bay auxiliary antenna to keep them on the air, and anxiously awaits the day when the Osprey will become an empty-nester.

One mystery remains, according to Francioni: “how did the mast get bent and the antenna harness cut that caused the issue in the first place?”

Unfortunately, the Osprey is not talking. 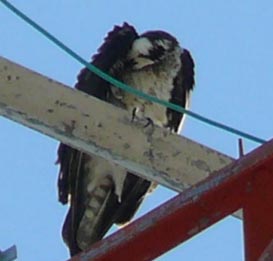