[April 2020] One mark of a good engineer is to know when to pull out your hands and call for help. Whom you call can be very important in solving problems.

A customer of mine is a well-read veteran of not only The Nam but 30 years of high power AM broadcasting.

I am proud to call him my friend. He flies his POW flag proudly and is surely one of the most learned guys that I know in the field of AM radio on any topic. If he lacks in any field it would be diesel engine operation and repair.

In some areas of my range of work, one of the first questions asked of you is “Where you from?”

This is an important question to them mostly because if you came to work on something for them and you came from more than 75 miles away, this qualifies you to be an Expert, or a Professional in the claimed field of pending work. While this seems like an overly simple standard, it does make you wonder a bit about the people that are sent out to fix something for you and why did you not just fix it “your own self” as these folks say.

In any event, I was assisting my very learned friend with some phasor and transmitter issues, and when we were done, he sheepishly asked “Do you have a few more minutes to look at my generator?” I said “of course I do,” so off to the generator building we went.

Checking out the Generator

This is a 50 kW AM plant with full facilities so the AC mains service is a split 277/480, with a master dropping transformer for the low Voltage loads at 120/208.

The transmitters, heating, air conditioning, and lighting are all 277/480. The genset is 350 kW, a diesel that lives in its own building. Overall, the installation is nice with my favorite Islatrol surge arrestors and other smaller units.

My friend explained to me that the local rep for his generator had been out to look at the machine six times for excessive smoke. As I am pretty good with engines in all forms from LPG to diesel, I had to wonder what constitutes “excessive smoke?”

My friend said “watch this.”

I tried to watch the engine frame while it cranked, while also checking the exhaust output through the window. The engine rolled over the typical six or seven revolutions to give the electronic timing a clue where the pistons were, when the first cylinder hit with a violent, frame shaking “off to the races at full throttle” belch right up to 1800 RPM. This is not what a newish Tier 3 engine is supposed to do.

Running, But Not Well

This thing hit the fuel rail like a runaway train but the governor caught it and held the RPM at the required 1800 revolutions, all the while fogging for mosquitoes through what should have been a three to four second ramp up to 1800 rpm.

The entire 10 second ordeal was frightening.

This engine start was more like a 2 MW on a cold day with a bad block heater. I hit the shut down command and with wide eyes asked him about 50 questions that the technicians who were from a shop over 75 miles away should have asked.

My first question was “when did this circus start and end, and does it do this every time?”

Neither answer was good. My friend reported the last Tech said “just run it with a load and when it blows the carbon out, the smoking will stop.” I asked him to wait while I went out to the truck and got my thermal infrared camera. After installing the heat shield on the wide angle lens, against my better judgment, I asked him to start this runaway train again, and I started watching the cylinder heads and exhaust manifolds with the camera.

Fortunately, this was an in-line engine format, so I could see pretty much everything that I needed to see with the camera without having to pan around or miss something.

Right away the temperatures started to appear and cylinders three and four were rising way faster than the other four cylinders.

While cylinders three and four had the same heat curves along with their exhaust port piping, the other four cylinders were nearly cold and their temperatures were what I called extremely low.

I recorded a few quick images of the heat rise and, still against my better judgment, stayed in the room until the machine reached full jacket temperatures of around 185F.

The machine rather quickly reached a point where the smoke billowing out of the exhaust pipe was too thick to see through and the engine block parts had thermally stabilized.

The two hot cylinders led the pack with head and jacket temperatures that exceeded 290 degrees F and the exhaust ports were 600 degrees F higher than the other four pistons and ports. 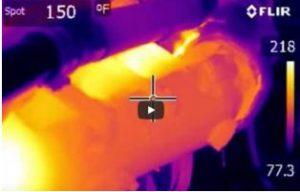 With the engine shaking violently, I shut the thing down.

The service folks were from more than 75 miles from his location. They were considered the experts.

My friend explained that they had done a load bank and full run up, and declared the machine fully operational – and that he had nothing to worry about. I told him that cylinders three and four had broken injectors and they were not metering the fuel.

My friend said that even though the machine was not new or under warranty, the local rep had no interest in coming out again.

Actually, those two injectors were not only running the engine hard into the governor, they were making most of the horsepower under load.

The sensors, injector pump and injectors needed to all come out for testing or replacement. I cautioned him that repeated running of the engine, especially under load will result in a catastrophic failure of the armature and engine bearings.

He agreed with me since he had not previously seen any infrared work done by the technicians.

What Would You Expect?

Three operational hours later, the crank shaft and two pistons blew out of the side of the engine.

When you hire trades to come in and work for you, there is no substitute for local knowledge and recommendations. You just have to be sure that the only qualifying factor is better than “They’s from more than 75 mile from hyear”

Common sense is not an app that you download.

Gary Minker is president of Radio Works RF Consulting, in Lake Worth, Florida. He can be contacted at gary@radioworksrfconsulting.com or (561) 969-9245.