Identifying Who’s Who at 2 GHz 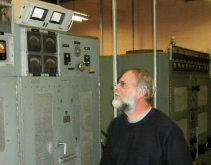 [April 2020] It is always a struggle to be sure who is sharing spectrum, even with the diligent efforts of volunteers who track and build databases. Often users do not know who is next door, or who might be moving in. Recent events, especially involving satellite spectrum use give opportunity to take a look.

The VHF, UHF, and microwave radio frequency spectrum were given to the military during World War II and they used this spectrum successfully, developing all sorts of new technology supporting the war effort. After the war was over the spectrum was mostly returned to the civilian world.

Early adopters of this spectrum were FM radio and television. The concept of Broadcast Auxiliary Service (BAS) was not new but new frequency bands became available to the broadcast community. The new TV stations could now use their RCA TTR-1B/TRR-1B mobile relay equipment without fear of any problems.

Gradually this changed as more and more uses for this spectrum were assigned frequencies. And technology made gigantic leaps needing yet more spectrum for new uses.

If I told you in 1970 that a handheld multiband computer-controlled transceiver would be in wide use you would have replied “That’s Science Fiction like what Captain Kirk used on Star Trek.”

But that technology is also known today as a cell phone – something that literally did not exist then but is ubiquitous today. As the tech grew, the empty microwave frequencies gradually filled up until there was no unused or “virgin” spectrum left, leading to finding compatible sharing of frequency bands.

Unfortunately, not everybody is aware of this until there is a problem. And because the different fields tend to fall into the category of “silos” it has become difficult to appreciate how complex the radio frequency spectrum use has become.

I have always struggled with understanding this as Chair of the Northern California Frequency Coordinating Committee (NCFCC).

The reason is that the information is scattered across many different FCC Rule Parts, and is not immediately apparent. Since I had some free time recently, I started looking into this in enough detail to understand just who shares the “2 GHz” Part 74 Subpart F TV pickup band with the broadcast community.

What the TV broadcast world calls “Channel A1 through Channel A7” – 2025-2110 MHz – is shared with Federal and non-Federal “Space Operation (Earth-to-Space).” For a long time, the shared Space Operation spectrum was not heavily used and caused no impact to TV broadcasting but today’s small satellites in Low Earth Orbit (LEO) has started to come to the attention of the NCFCC.

In addition, the Department of Defense has been told to relocate many of their L-band (1.8 GHz) Earth-to-space operations to the 2 GHz band. For the time being their existing satellites are using the existing L-band frequencies but new satellites having different control receiver frequencies in the Federal Space Operations band will soon be launched. 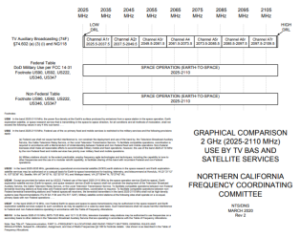 Unlike geostationary satellites LEO satellites move, and an Earth-to-space link has to follow and track the moving satellites. Because these operate at high power (in the order of +80 dBm EIRP) and can directly illuminate high elevation 2 GHz electronic news gathering receive only (ENG-RO) sites we can no longer live in ignorance.

My perspective is that we will see more LEO Earth-to-satellite installations across the country as this type of satellite becomes more useful to many different fields.

The 2.5 GHz band is complicated with eight different uses allowed all using basically the same spectrum.

For a long time, Part 15 and Part 18 devices were not a problem until WiFi. Yes, it is said “Spread spectrum does not cause interference” but what it does do is raise the noise floor, making TV BAS channels A8 and A9 (but not grandfathered, former BAS Channel A10, where WiFi is not allowed) less useable than they had been.

Another example of “silos” is the Part 90 2450- 2500 MHz band. The local Association of Public Safety Communications Officials (APCO) coordinator was unaware that this band is shared with many different services. In the Public Safety world this band is commonly used for video links from bomb robots. The use of such robots likely will be a news event that also likely will be covered by TV ENG that likely will also want to use their microwave at the event. 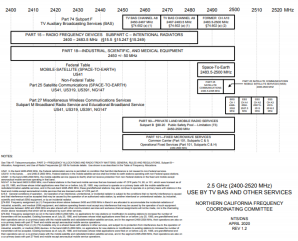 In looking over this and writing this description I am now thinking that I may need to develop another graphic somewhat zoomed out to show what is in use below 2025 MHz and above 2110 MHz and below 2450 MHz and above 2500 MHz. We need to be aware of our neighbors.

These documents are not secret and should be widely shared to improve our knowledge of the multiple uses of the 2 GHz spectrum. Please credit the NCFCC.

My thanks to Dane Ericksen, P.E., EIBASS, for pointing me in the right direction and spotting my typos.

Bill Ruck is the Chair of the Northern California Frequency Coordinating Committee. You can reach him at: ruck@lns.com