Sites You Probably Want to Avoid

Written by Barry Mishkind Posted in The Worst I've Ever Seen!.

[May 2022] Transmitter and site maintenance has become more difficult to accomplish in recent years for a number of reasons: Consolidation, reduction in technical staffs, management refusal to pay for maintenance at aging sites that need attention, etc.

There are many excuses, but still, looking at what some sites have become can be a bit breathtaking.

Not too long ago, someone mentioned being sent out to do a due diligence report on a station acquisition, and after some research found the transmitter in the middle of a field, covered by a tarp.

It turned out that the previous owner had not paid rent on space in a barn. When the landowner dies, the son tore down the barn, but did not know how to contact the station. The new station owner had never been to the site – professed not to even know how the signal got from the studio to the listeners.

Bottom line: the forlorn transmitter was virtually abandoned. One can only wonder what would have happened if it dropped off the air before being “found.”

But this is not the only similar story.

Especially in hard-pressed smaller stations, it is easy to allow maintenance to get behind – and when the owner rarely or never goes to the site, it is hard to get him to spend any money on it. If the engineer is a contractor, it gets even more difficult to make a consistent maintenance program.

Imagine you got a call from a station needing help. But, when you get on site, the view is a bit less than reassuring. So …. This is what potential visitors would see.

Yes, there is no window here. Yes, the front steps have long fallen apart. The owner of the station was unwilling to put any budget to maintaining the building – and likely the equipment inside – and it is pretty obvious, is it not?

While not the same site, a lack of maintenance produced here is what led to what would be charitably called a “leaky roof.”

INSIDE A BUILDING “OPEN” TO THE ELEMENTS

It fine weather, you can get along for a while in an emergency, for example after a bad storm has passed.

But eventually stations that pay attention will find it all will catch up with them.

Take a look at yet another site. This is inside, although you might wonder about it. There is a similar problem: no protection against ambient weather.

The new owners of this station reported the floor was rotted (surprise!) and no one wanted to really work inside the building until it was properly repaired.

Or this fence on for size (and condition):

But, as you can see, just getting the RF to the tower can be challenging to those lacking cable management skills! 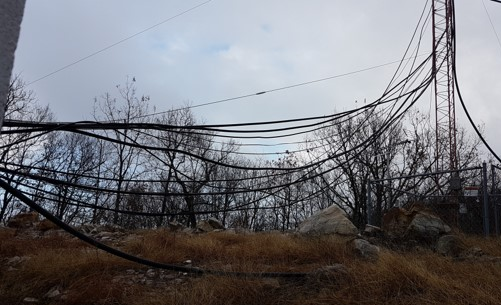 You probably know more such sites. Perhaps some even worse. While we cannot always avoid them, we can learn from these situations, as we work to prevent downtime wherever we have responsibility.

Go ahead, share your pictures – we will not tell where they are located nor to whom they belong. We will not even use your name unless you tell us to give you credit – for the picture, if not the engineering!

The Worst I’ve Ever Seen! – a tribute to the words our late friend Richard Haskey would deliver the phrase upon seeing situations like these – is a periodic look at some of the curious things that happen in broadcasting. It is never designed to embarrass anyone but to remember “stuff happens” at the various sites we have to visit. In fact it is a chance for us to learn from others’ experiences.

And, after we chuckle a bit, it does remind us to check out our own facilities … carefully!

Got a good picture to share? Let us know at editor@theBDR.net