At a time when many see Broadcasting in trouble, 104,443 folks showed up to the 2017 NAB Spring Convention. About 2/3 of the world’s countries were represented. There was more exhibition space and new exhibitors, but no Riviera – the implosion has left nothing but one parking garage standing.

It was very interesting to see how radio exhibitors, in particular, were distributed – and distributed they were. More than a couple were so close to Las Vegas Boulevard that you felt oyu were dodging traffic to get there, others were on the East end of the floor, a few in the middle, and a bunch still in Central Hall.

For us, it has been a busy week, with one of our number slowed down by having his truck broken into and his medications stolen – not to mention his clothes. Another was snared by a job that came up at the last minute – and the situation was confirmed by talking to several folks who are pretty much booked until the end of AMC-8 (If you do not have migration plans, time is running out.) And family issues kept another of us back. Nevertheless, here is a sample of what we did see and hear.

Opening the show in a literal way as well as symbolic way, Chairman Ajit Pai told broadcasters a lot of what they want to hear – even if a lot of specifics were not available. It was enough to get him a standing ovation as he promised a new translator window this summer and a stiff look at killing outdated rules.

Traffic on the floor was varied, from busy to slow. It did look like those who stayed in the Central Hall got more traffic, but most were happy with what they got.

This was quite the year for anniversaries of many manufacturers. Most brought some cake and refreshments to the booth. A few had some well-known industry folks in attendance, including Shotgun Tom at the SAS booth.

Some of these, of course, are older than the NAB:

Other anniversaries were on the floor, as well, showing that the industry is mature and yet we see new products and services that can make a big difference in station operations.

Shown on the Floor

It was interesting to see how broadcasting, which has gone through major changes in the past 20 years, especially since consolidation became the norm. Not only seeing the change in technology (some can remember the large number of tape-based products, for example), but watching the march toward streaming, which some – even in government – hope will supercede broadcasting.

There were quite a few streaming applications shown on the floor. Simple, one-way, setups to make remote connections easier were seen in the upcoming Opal from Comrex, as well as the existing application at ipDTL. Other implementations, such as from Enco, have developed several flavors of “video follows audio” for streaming live and delayed “podcasts.” 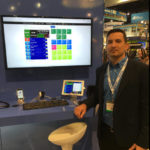 Speaking of Enco, their WEBDAD is making it easier and easier to incorporate the benefits of automation, wherever you are.

Using any common browser gives the remote the same screen and options as in the studio. From sports shows to inserting news and information during emergency periods, WEBDAD makes it pretty easy.

Around the corner, Lawo showed its new console. Completely software driven, it literally can be set up any way you want – for what ever studio needs you have. The layout, touch screen, and console are able to handle small stations to large studios. 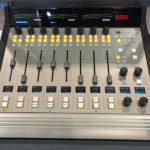 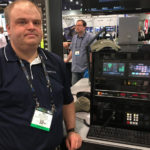 The purchase of the PRE brand, gives Wheatstone a new product, designed for taking one or two studios digital at a modest cost.

The AirAura X4 was released, the latest audio processor at Wheatstone, with HD and receiver capabilities … leading to reliable timing correction.

The Telos Alliance had several new items, but one of the most interesting was the Volt, the new generation of audio processor, having features that meet the needs of experienced users or IT people pressed into station operations. 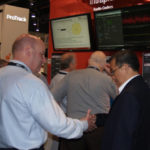 Another aspect of the consoles and processors was that AES67 was being supported as a standard and “bridges” are now available to connect different encoding techniques.

This might be best exemplified by the new GatesAir Intraplex IP Connect. Said to bridge any current standard, it should help operations that have to import audio from many systems and put out a feed that all can handle.

In the past few years, monitoring equipment has become more popular, to monitor off air, as well as various streams. Inovonics has been in the forefront of providing monitoring gear, from full-blown modulation monitors to modestly priced INOmini boxes designed to do everything from AM or FM or RDS monitoring to stream monitoring and IP return of audio to the studio. There are now plenty of these models, and Inovonics probably will need a larger table next year. 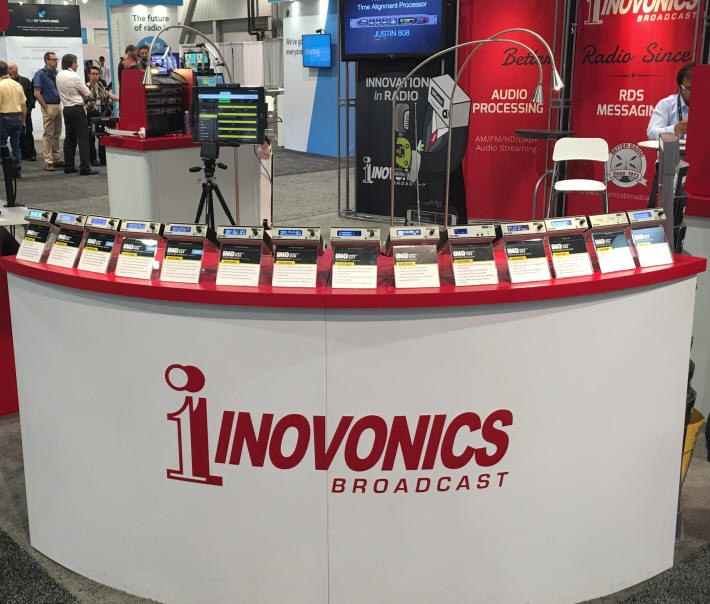 Yes There Was RF

Nautel continues to do things that respond to customer requests. This year, the NVlt series of transmitters was provided with a pathway to HD Radio, should stations change their minds about implementing the system. 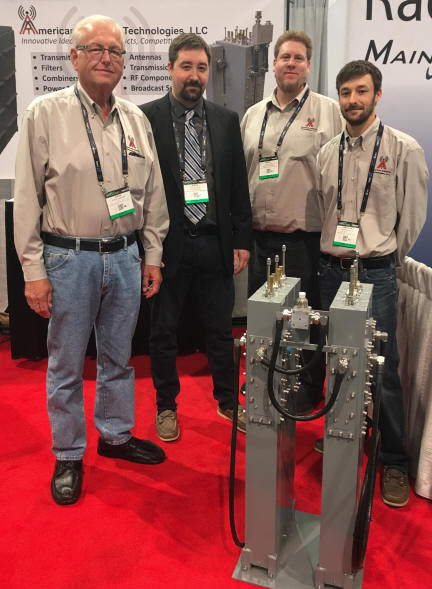 American Amplifier Technologies, a newer company, brought several interesting items to the NAB Show, among them a digital power/SWR meter and a new filter.

The line meter is designed to give a reliable reading for power and SWR, no matter where in the output circuit it is connected.

Another welcome trend is some companies like PTEK are taking measures to repair/replace a rather unfortunate reputation with a proactive customer-based approach. 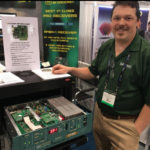 With evermore connections by IP, it was good to see those companies where efforts are being made to better protect station gear from the “script kiddies.”

Crown is among the latest companies to develop a remote display for their systems, including parameters and alarms. They intend to ensure that they are doing all they can to protect most users – with the obvious exception of those who do not change user/password on boxes that are connected to the Internet.

Think this is not necessary? To show how easy it was, one engineer, using a browser in a cell phone, displayed an open Barix box in less than 30 seconds. He could have shut it down or reset the audio from nothing to the “infamous” F Donald Trump loop. Another 1900 boxes were responding to pings. We hope none of them are at your location.

It was nice to see more real attention being given to AM Improvement beyond making translator operators very wealthy. 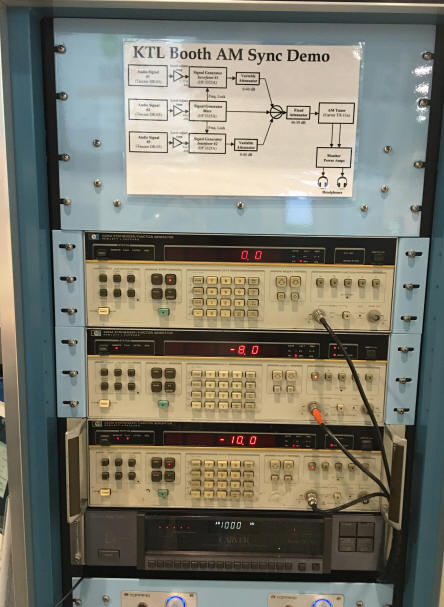 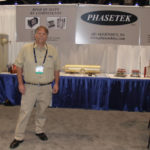 Tom King, at Kintronic Labs had a very interesting display showing how syncing AM transmitters can make a big difference. Also, he ahs done studies looking at the noise floor and other issues will help AM stations improve what is transmitted.

Kurt Gorman at Phasetek was also at the show, with information on new and maintaining existing sites, as well as the current popular move: multiplexing. Whether a pair of ND’s or multiple AM-DAs, Phasetek and Kintronics are ready to help stations see what choice is the best for them.

Needing to show the operator where a problem exists in a multi-station facility is not always easy. Henry Engineering and Paravel Systems are two companies that adding specific visual alarms. 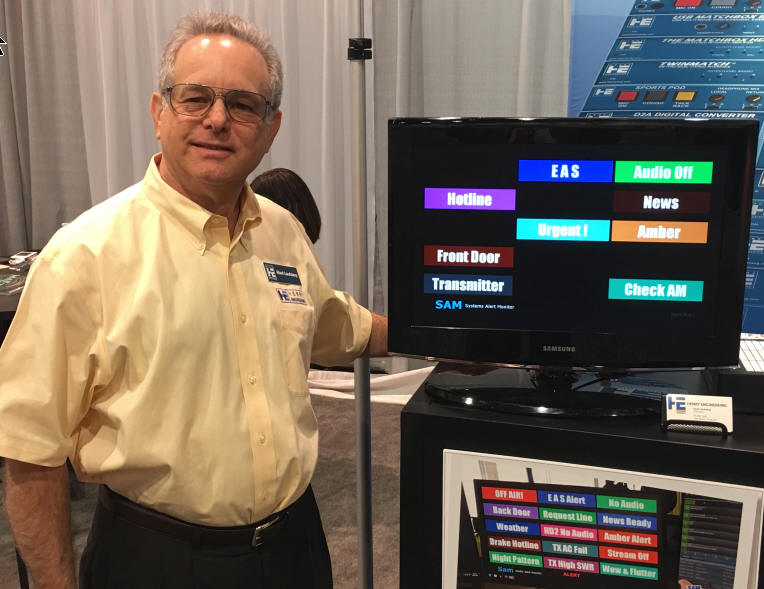 Yes, we did have the 25th Annual Lunch Gathering … and we again filled the room plus some at the Westgate. It was really nice to see some faces that have not been to NAB in recent years.

Some pictures from the Lunch are in Alan Alsobrook’s piece. We have some more and may post them in the coming week.

Another tradition – at the end of the show – had a strangeness this year.

A lot of folks gravitate toward the Telos Alliance booth toward the end of the show. Beach balls are tossed, folks are dancing on the tables, air guitars are played with energy, all to the sounds prepared to backtime to the announcement of the show closing – and led by Frank Foti on the air guitar with “Won’t Get Fooled Again!” 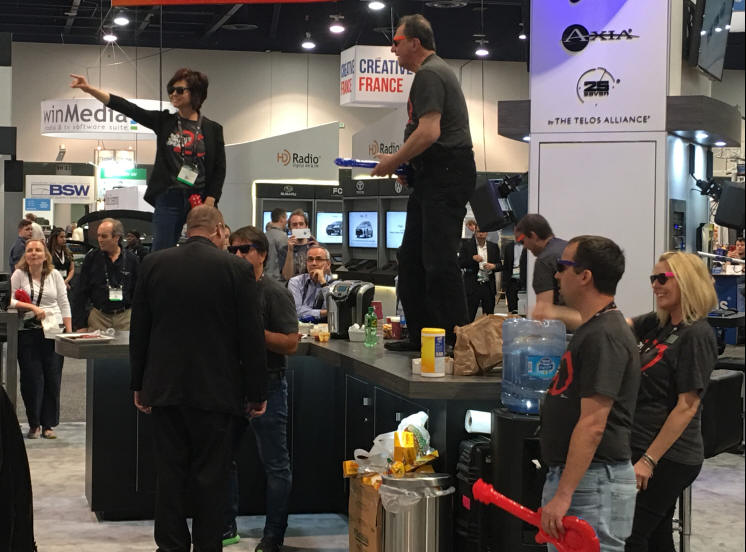 Yes, the speakers are turned up – with clean audio – to be heard more than a few aisles down the way across the Hall. It is a great release after four days of the show.

And then – all of a sudden – it sounded like a 20 dB pad was dropped in .. and the release was more of a whimper.

The Scrooge was the NAB Registration table – although one wonders who/what/why they were still in place as the show closed. In any event, they complained to the NAB Floor Cops, one of which came over and really hassled the Telos folks, telling them to “turn it down now, or we will not give you any power next year” and “if you do not turn it down, we will fine you.”

We have to give it to the Telos audio team, John and Addison, who endured the attack – as if this audio had never been turned up before – and managed a timely recovery at the end of the song, to bring it to a level that allowed everyone to “release” the pent-up emotions!

This aural stand-off to continue next year….