[May 2014] Most of the time, after a tower site is constructed, it is assumed it will “just be there” for as long as the station needs it. However, that is sort of like buying a car and never changing the oil or tires. Eventually something not very good will happen. Good maintenance prevents that.

As part of the quarterly lighting system inspections – and a quarterly routine even for stations without tower lights – it is a very good idea to take the time to check the towers themselves for structural and electrical integrity.

As can be seen, two guy wires were lost on this tower. The resulting pressures can be seen to have created some structural issues, to say the least. The cause – a failed guy anchor – means other guys may be at risk. And as this tower is part of a multi-tower directional array, repair can become quite a project.

Towers (and Anchors) Do Age Too

Something most engineers know but few managers truly appreciate is that towers are not forever. True, towers that are properly maintained will last quite a while. There are towers around that have stood for 80 years. But they have been carefully monitored. On the other hand, some “young” towers can deteriorate very quickly.

A poorly installed or poorly maintained tower can – and will – fail or develop problems making it dangerous or impossible to climb. (Here is a good example!) Then you run into the bureaucracy.

In a sort of “worst case scenario,” it even may turn out the local zoning people will not permit a replacement tower, ruling the original was “non-conforming” when it was built. One station in Florida fought with local zoning for over 18 months about a tower too dangerous to climb. The station was under pressure to replace a beacon that had failed but no one would climb the existing tower. The zoning board was not willing to allow a replacement tower. Before long the Enforcement Bureau showed up and started fining the station for not having the beacon operational.

Such are those times that cause great hair loss!

The truth is, however, that far too many stations either forget to check on the condition of their towers regularly or, worse, fail to set money aside for this important maintenance issue. Eventually, this sort of neglect catches up with them.

Depending upon the type of tower and the painting and lighting requirements, it is a important to be proactive, regularly inspecting each tower and looking for evidence of signs of wear and fatigue: fading paint, loose connections and clamps, blocked weep holes, broken insulators, broken or loose guy wires, guy wire tension, etc.

Such an inspection should take the time and effort to look below ground level for corroded guy anchors, exposed and/or broken ground wires, evidence of burrowing animals that could cause failure of those anchors, the transmission coax, electrical and control lines, etc. 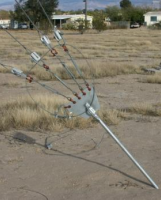 As a real world example, notice this guy anchor. There are some things that are done properly, including the insulators and the loop to prevent tower vibrations from affecting the turnbuckles.

However, there is a common – but potentially fatal – problem with the anchor itself. Notice how it goes right into the ground. This permits electrolytic destruction of the anchor leading to failure.

In fact, at the particular site shown, one of the guy anchors did fail (see pictures following) not only taking that tower down, but also slamming into an adjacent tower, killing it. It took over a year and a half for the station to recover fully. 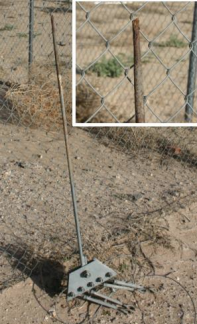 On the left, you can see the guy anchor that failed, with a close-up of the point of failure in the inset. The metal had deteriorated so badly that a strong local wind was all it took to snap the guy anchor and kill two towers.

Some folks have used various methods to try to control the electrolysis, including various metal cathodes, which “sacrifice” themselves rather than the guy anchor itself.

There is a more direct method which, if properly prepared and the right chemical additives are introduced, will protect the anchor on a longer time span.

This is to encase the anchor in concrete. The downside is that if the installation is not done properly, it is much harder to see if a dangerous condition is developing.

Perhaps a better way to ensure the long-term survival of the anchor is using a concrete pedestal. The engineer who repaired the earlier damage to the site shown used that approach. After replacing the anchors with ones encased in concrete and installing a “figure 8” safety loop to keep any casual visitors (or vandals) from fooling with the tensioning, the original tower withstood even the microburst that took down two of its neighbors. Much better 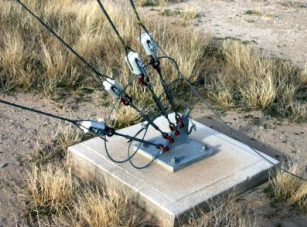 Do Not Rely on Others

Some stations do budget for and schedule a periodic inspection by a respected tower crew. That is good if it can be arranged, and their report will document the condition of the tower site and offer recommendations of what work must be done and what maintenance can wait.

Tower crews will come with equipment a station may not have on hand, such as tension meters, surveyors’ transits (to check orientation, alignment, etc), official paint color charts, digital and infrared cameras, etc. 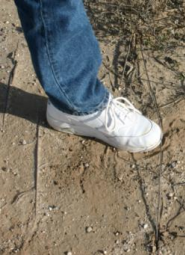 However, this should not replace a program of periodic inspections by station personnel.

For example, it does not take a tower crew to find and cover exposed copper or notice broken insulators or other problems. Perhaps the GM might be motivated to ask some of the station staff to help – a Saturday Pizza Party might even bring the staff together.

And even without a tension meter, it is not too difficult to pull on a guy wire and see if it is excessively loose or dig around a guy anchor and inspect its condition.

Overall, the sooner such problems are found, the easier they are to fix.

Get the Best Advice

Work with the company that provides tower services to you. Let them help you to understand the type of metal in your tower and how to keep its surface in good shape. They can suggest possible areas where you might need to take steps now to prevent problems later, with the tower and/or the local zoning board.

All in all, the object is to make radio waves, not tower waves.