KRKO and Sister Station do Digital AM

Written by Barry Mishkind Posted in In the Trenches.

After Over the weekend of October 2-7, KRKO, and sister station KKXA were picked by NAB Labs to conduct experimental broadcasts of digital only radio on AM.

In part, the Press Release said:

Everett, Washington ? If you?re hearing silence on your radio this weekend, it may be time to purchase a new receiver. The Federal Communications Commission has approved experimental test authority for Everett area radio stations KRKO-AM and KKXA-AM to serve as the final all-digital test stations out of nine chosen by NAB Labs, a division of the National Association of Broadcasters. The testing will require both radio stations to broadcast their programming utilizing all-digital HD Radio? Technology and temporarily suspend their analog broadcasts for periods of time between October 2 and October 6, 2014. NAB Labs is collecting test data to better understand the performance characteristics of all digital transmissions via AM radio. Results of the tests will be processed and submitted to the Federal Communications Commission in 2015.

After a decade-long fight with zoning commissions and vandalism to its site just as it had finished building the first of two diplexed stations, Andy Skotdal’s KRKO site is getting ready to finish the second station.

The final two additional towers were stacked on this date and, as construction is finished, the plan is for KKXA (1520) to join KRKO (1380) on the air over the summer. 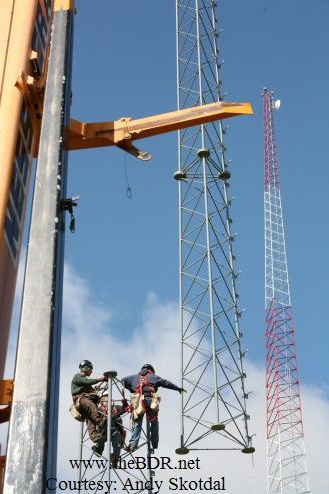 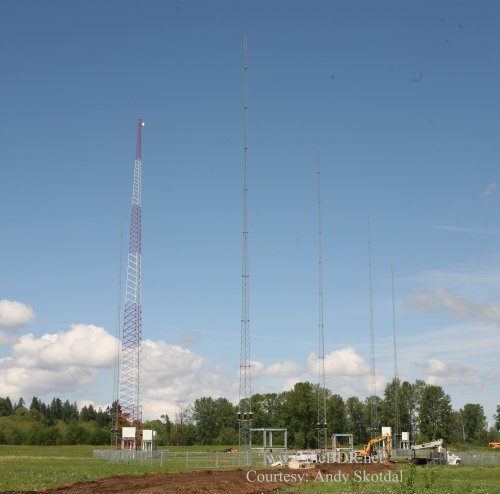 Read below for more of the story on the long struggle to build this facility. Additionally, for those interested, summaries of the zoning hearings were posted on the Internet. Some of the material is here, and here, and here. There are video clips from the hearings posted – complete with such typical accusations as the towers will kill property values and RF will kill children. There was even one man claiming that the farther the distance from the antenna, the more dangerous the RF. (Note: The video appears to require certain browsers or versions to work properly on PCs, or a plugin for Apple. For example, IE works, Firefox 4.0.1 did not – at least when this is written.)

This is almost the poster picture of how hard it can be to build towers these days.

Early on September 4, 2009, neighbors reported three people running from the KRKO site. Inspection later on in the morning showed their tallest tower and one of the other three were knocked over by a trackhoe. 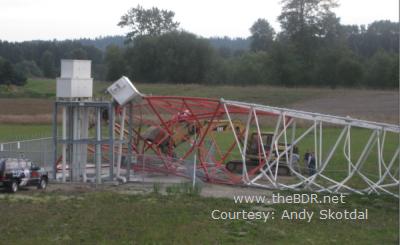 Fortunately, no one was hurt. According to station owner Andy Skotdal, the station never went off the air, although it is now operating from its back-up site.

Although KRKO has not accused anyone of the vandalism, late Friday (Sept 4th), one of several websites for ELF (the eco-terrorist group Earth Liberation Front) claimed responsibility. The spokesman made typical statements blaming AM radio for health problems and trying to justify their vandalism.

KRKO is offering a $25,000 reward leading to the arrest and conviction of the vandals.

One group of eco-terrorists have claimed responsibility.

The station has already started to rebuild the towers. 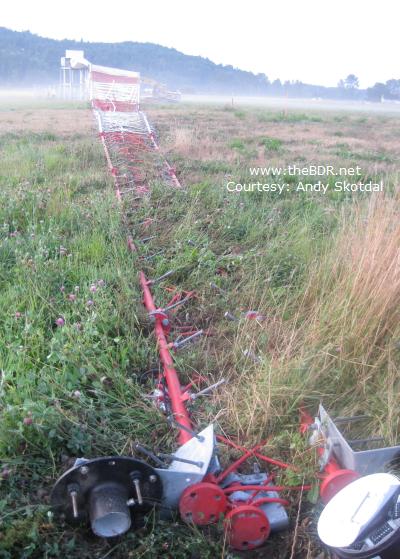 KRKO Radio in Everett, WA has been fighting a battle for something like 10 years to construct the tower site.

The usual petition drives and arguments were dusted off, photocopied, and presented by all the neighbors. Stories about irradiating children – and worse – caused fear and loathing. Fortunately, Skotdal and his company were able to prevail at the hearings over the emotional and pseudo-science presented against the station.

Now that the site is up and running, it appears the attacks have become physical.

Also there are video files of the hearings on the Snohomish County Zoning Board web pages. They make for interesting listening, as the various allegations of RF dangers are tossed out. The entire situation presents a lot of valuable information to other stations in dealing with zoning boards and local protests.

There used to be more video of the site and vandalism, but the station appears to have scrubbed it off the website.