It Was Mounted Where?

[January 2011] Finding a good place to hang an antenna is not always quick and easy. But what seems reasonable in a rush may not look so good later in the light–assuming the installer actually was looking!

It is hard to decide where to focus the eyes: on the antenna elements or the pole where the antenna is mounted. Ultimately, as the elements are, they are not inherently dangerous. On the other hand, regardless of the insulation on the wire and connection, can anyone really suggest this is a good mount? 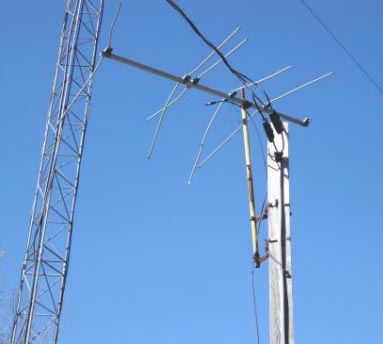 Jim Travis of Family Life Network was kind enough to send us this picture. It was there on site when he moved an FM station to the tower behind. As Jim said: “You know when you open a box with an antenna in it and on the first page of the instructions is the explicit warning not to mount this antenna near electric lines due to the risk of shock? Well, this is the 100 Amp service entrance to the transmitter building.”

Travis assures us he promptly removed the sad antenna “… safely … “ and it is no longer an accident waiting to happen.

Of course, there is no antenna mounted like this anywhere around your site, is there?