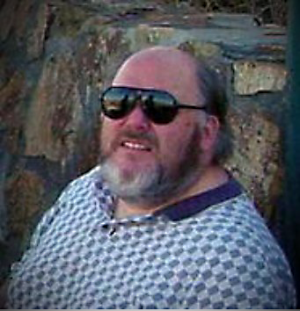 [April 2015] Since digital audio processors came of age, there are a lot of models to choose from, each demonstrating the philosophy of its designer. Selecting the right one to make your station is not always easy. That said, our resident Golden Ears, Dana Puopolo, checked out the latest from Inovonics, the DAVID IV and offers his opinion.

I have to admit that I agreed to review this product with just a bit of apprehension.

Inovonics has had the DAVID (vs Goliath) FM audio processor line out for about two decades. I inherited a first generation one at an FM I worked for in 2000 and I must admit it sounded prêtty bad. It had one knob on the front to adjust its processing, which went from “OK sounding, but not loud at all” to “UGH!”

It remained our third backup processor.

But that was then and this is now – and the current Inovonics’ DAVID IV shares nothing with its predecessors but the name.

For one thing the original one model was analog, while this box is 100% DSP-based digital and unlike its great, great, grandfather sounds excellent. I ran this unit on a college FM station in NJ where I am Chief Engineer. Our programming ranges from an adult rock format during the day to heavy metal rock at night, and classical music on Sunday mornings.

The DAVID IV took all of that – and more – in stride.

Setup was a breeze. Its menus are so intuitive that I did not even have to read the manual – although I did anyway and found it to be excellent. The tested model has the Rev 3 firmware (although I have heard there now is a new firmware update on the way).

To start off, the DAVID IV has both analog and AES digital inputs (designed to be fed by unprocessed audio), two analog composite outputs, and analog and digital line outputs. The inputs lead to an adjustable high-pass filter, whose 2 slope is a fixed four-pole with the turnover frequency adjustable between 20 and 65 Hz. This sends the audio on to a stereo enhance function that works to increase the stereo spatial image.

Unlike other processors (including an analog one I use) this DAVID does not seem to decrease bass or increase multipath, at least at the conservative setting I used.

The main processing functions are comprised of four basic processing parts. The first part is a single band AGC with a total of 36 db of range (+/- 18 db), which works well to maintain a ‘sweet spot’ for the 5-band compressor.

The DAVID works on a ‘windowing’ theorem, much like how the four bands in the old Texar Audio Prism worked. The result is a very smooth control of the audio input levels.

In addition to the unit’s front panel screens, the DAVID IV can be controlled over an IP network. In fact, all settings can therefore be remote controlled 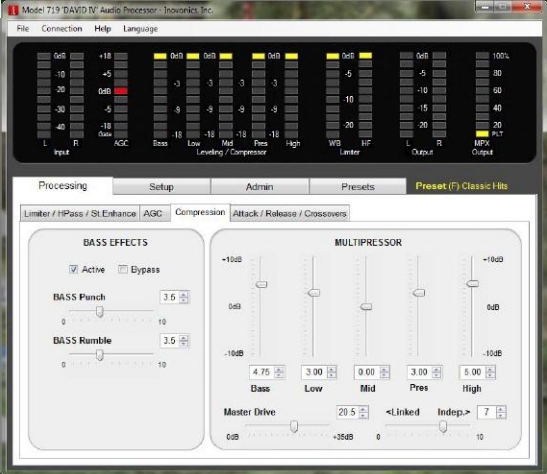 Following the AGC is a five-band compressor. This is there the desired ‘Sound Signature’ of the station is determined.

Unlike other processors which have a myriad of settings and adjustments, I found the DAVID IV to be surprisingly easy to set up, as many of the parameters are fixed with limited adjustment of the others. I actually found this to be a good thing as it seems impossible to make this box sound bad.

For example, the compressor input drive consists of only two settings – the drive control and the band coupling control.

Both of these affect all five bands – you cannot, for example, increase the drive to just the midband. The coupling control determines the tracking between the different bands and can be set between the extremes of completely independent and completely ganged (wideband operation).

Crossover frequencies and attack/release times of the five bands can also be user-adjusted. Yes, the limited parameter range might concern some engineers or program directors who live to endlessly tweak every processor parameter.

However, I found that Inovonics has set up the other parameters well (their manual states: “Optimum Multipressor parameter settings were derived from exhaustive tests by a core of listeners comprising both technical and non-technical types, including those with extensive musical training”). In my opinion they got it right!

The output of the five bands are adjustable, resulting in essentially a five-band equalizer.

There is also a pseudo sixth band (called “Bass character enhancement”) that has two controls: “punch” and “rumble.” These can add a lot to the bass response of the unit. Country and Urban formats will really like the effect they (can) make to the music. Of course, Inovonics allows this section to be bypassed for people who do not want bass enhancement.

Clearly, a lot of effort was made to make a multi-band compressor that sounds good without requiring a lot of tinkering. Inovonics seems to have gotten it right here as well. I did not find any objectionable delay in the unit (unlike with some other digital processors, off-air monitoring worked fine with this unit, even with live mikes).

Inovonics has factory installed 25 processing presets, which run the gamut from classical to grunge. I started out with the Classic Rock preset and found it to be about 85% of what I needed, so after a day or so I had the processing “dialed in” to my liking, and I left just it there.

The second stage is a single-band limiter.

What I found interesting about the DAVID unit is that it uses a patented method of symmetrical peak limiting (PIPP) that does not require the use of a “phase scrambler” (allpass filter). This results in an improvement in audio fidelity over other processors.

The limiter also uses a “look ahead” algorithm which means that the limiter already knows what peaks are arriving before they do so. This insures that the correct amount of limiting is there at all times. The parameters that are user adjustable are limiter drive and limiter density, which seem to adjust the limiter between the two extremes of RMS/peak limiting vs peak limiting only.

This is a very powerful feature, and it can make your station sound in-between the two extremes of “quite open” and VERY LOUD!

Adaptive pre-emphasis changes the degree of pre-emphasis, and thus the brightness of the unit. Once again, Inovonics keeps the adjustment in hand – the only adjustment varies between HF clipping and HF limiting.

The best analogy I can use is to compare it to the HF limiting control on the old Orban 8100A. That control went from “hard” to “soft” and the Inovonics control mimics this as well, though it goes from “clip” to “limit.” The Clip function uses clipping to control high frequencies, resulting in a brighter sound that can have distortion, or uses a softer audio handling, which lowers the amount of pre-emphasis to result in a duller sound with no distortion.

The final processor is a “brute force” hard-clip composite clipper. The 19 kHz pilot and RDS is inserted after this clipper so they are not affected by it. I would recommend using this only if the processor is physically located with the FM exciter.

Finally, the David incorporates a digital stereo generator that is capable of over 60 db separation.

After all this I know what you want to know: how does it sound?

In a word – great! This box will give you what you want, provided your expectations are realistic. It is loud and clear and dynamic. It does exactly what its designers set out to do: produce a great sounding FM audio processor at a value price.

My main processor is a BW broadcast DSPX mini FM SE and I was amazed at how similar I could make the two processors sound – yet the DAVID always sounded just a bit better. If I was buying a processor today, I would seriously consider buying the DAVID over the BW.

If you are a station that has not previously dipped its toe into digital audio processing, this is the box I would buy. At its price point, Inovonics does have formidable competition, however, and I would advise you to listen to them all, if only to develop a comparison point for yourself.

Personally, if I was signing on an LPFM, an educational FM station, a commercial station which does not need the extra half a dB that the megabucks processors have over this unit, or even a major market FM station looking for a backup processor that will simply blow away your current backup, I would buy the DAVID IV in a heartbeat!

Congratulations Inovonics, you have a winner with the DAVID IV!