[November 2019] Recently, we have entered a new cycle of station license renewals. As part of the process, the FCC wants to know if a station has complied with its Authorization. The best way to be sure, short of an inspection by the FCC or an ABIP (Alternate Broadcast Inspection Program) inspector, is to use the FCC’s Self-Inspection Checklist. Or is it? 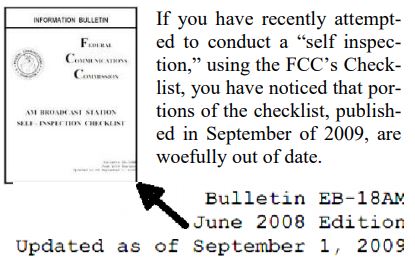 There have been changes to the FCC Rules that affect all three broadcast services for which the Checklist is published. At this time, the FCC has no announced plan to update the Checklists, so stations have been left a bit adrift in trying to ensure compliance.

The purpose of this article is to reconcile these checklists with current FCC Rules, while allowing the still-pertinent portions of the checklist to be utilized. You may wish to use this material to “mark up” your own copy of the Checklist.

The section and subpart numbers referenced are from the respective AM/FM/TV checklists, Bulletin EB-18(xx), dated September 2009.

Section I – (All Station Types):

While there is no “control point” specified any more (this went away with the “Main Studio” rule), it is highly recommended that licensees keep all of their licenses and authorizations in one place.

I have seen licensees place these documents in a notebook or binder file to make sure that none of them become missing. This is also a good place to keep the AM/FM transmitter efficiency rating (F), as well as posting it on the transmitter itself.

Telephone access to the station via local or toll free number is still required.

This is where things get interesting. In January 2016, the FCC adopted rules to move the Public Inspection Files online.

By the way, do remember that “letters from the public” are no longer part of the Public Inspection File.

Within the Online Public Inspection File, the FCC has populated the license authorizations, and contour maps. It is recommended that all of these be checked for accuracy against the local station authorizations.

RPU and STL licenses need to be included if they are not in the OPIF.

All of the other items in the OPIF are still requireed up to item #46.

These are no longer applicable, as they pertain to the “Main Studio” rule.

Copies of Subcarrier leasing agreements should still be maintained.

Subpart “A”: The required Antenna Structure Registration (ASR) tower registration and the posting of such registrations still apply,

However, as of September of 2014, the Commission established a process, documented in Part 17.47 (c), allowing an exemption to the quarterly inspections called for in subpart (b).

The exemption applies – if (and only if) – “for any antenna structure monitored by a system that the Wireless Telecommunications Bureau has determined includes self-diagnostic features sufficient to render quarterly inspections unnecessary, upon certification of use of such system to the Bureau.”

This is not a trivial deal. If you have advanced diagnostic functions, an operation center staffed with trained personnel capable of responding ot alarms 24/7/365, and a backup network operations center that can monitor systems, you “may be eligible for exemption.”

The FCC’s September 2014 Order updated the painting and lighting rules.

Tower owners are required to comply with the marking and lighting specifications included in the FAA’s “no hazard” determination for that particular tower, if built after September 2014, thereby making FCC and FAA regulations consistent in this area.

The Order also emphasized that changes to marking and lighting specifications on an Antenna Structure Registration (ASR) require prior approval from both the FAA and the FCC.

Importantly, the FCC specifically declined to require existing antenna structures to comply with any new lighting or marking requirements unless mandated to do so by the FAA.

Bottom line: The questions about painting and lighting are still applicable, but towers constructed after September 2014 must now satisfy the FAA’s “No Hazard” conditions on the tower construction itself.

Subpart “E” and “F”: FAA notifications/Station logs These rules still apply, but the FCC has clarified its Rules as to when the lights must be repaired to “as soon as practicable.” Previously, a tower owner had 15 days to correct the outage, and could receive one 15 day extension. In addition, the FCC now specifies that records of observed or otherwise known tower outages must be kept for two years, and made available to inspectors on request.

Subpart “G”: Tower Fencing This is one area that the FCC has not relaxed anything. It is also a known “point of emphasis” in an official FCC inspection.

All of these subparts still apply, and is another known “point of emphasis” by the Commission. In Subpart “B”, the most recent FCC EAS handbook was published in July of 2017. It needs to be completed by the station with specific and local instructions included before printing. Also of note is logging of tests and alerts (Subpart “F”)

Nothing has changed for AM and FM stations in this section, however the TV portions have changed dramatically.

The 2009 document references “visual” and “aural” power, as was the case before the digital transition in June 2009. Now, with digital transmitters, the FCC Rules require measurement of the average power of DTV signals. This is accomplished by a calibrated device which is connected to the output of the transmitter’s mask filter.

The Rules also note that when a high power klystron device is changed, a new proof of performance should be performed, with the results made part of the stations transmitter records.

Nothing has changed in this section.

Nothing in this section has changed in Subparts A, B, and C.

However the “Main Studio” requirement in section D has been eliminated as of October 2017.

While the FCC did address the usage of “Method of Moment” modeling of proofs of performance in September 2017, none of the requirements in the Self-Inspection checklists changed.

Tim Berry, CBRE, WB4GBI, is Chief Operator of WUOT, University of Tennessee, Knoxville. He is an ABIP inspector in Tennessee, and runs a group of 15 repeaters in Eastern TN. You can contact Tim at tberry1@gmail.com