Finding the Right Antenna for the Job 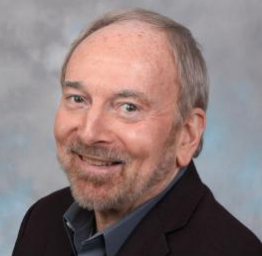 [April 2016] Consulting engineers can spend a lot of time fitting a station into the area available. Sometimes having the right antenna at hand solves a lot of problems. Clarence Beverage explains:

In the FM translator filing window that opened on January 29th of this year we had a couple of cases where the only way it would work required specifying antennas that might not be familiar to everyone.

In these cases, we found the frequencies that would work had to be on fairly short towers and inside adjacent-channel protected contours that required keeping interfering signals of about 100 dBu from reaching the ground.

As we did the study, we found this could not be done with less than six-bay ring-type antennas – but could be accomplished with four stacked Aldena two element Yagis with the elements turned at 45 degrees for elliptical polarization.

That solution was arrived at using their EMLAB software to calculate our own elevation patterns that met the protection requirements using techniques such as unequal power in the end antennas and realizing that Yagis have a narrower elevation pattern to start with when compared to a standard circularly polarization antenna.

My first acquaintance with Aldena came in the mid-1980s when our firm was looking for a software package to use in the design of multielement FM and TV antenna systems. That software, now called EMLAB, has served us well for many years, and is available in multiple configurations including new propagation standards and digital transmission modes.

We like having this company as part of our tool box to meet FM and TV station unique requirements because they do offer products and services that meet demanding client needs. Here is another example:

We have used Aldena’s 8-element log periodic and 5-element Yagi antennas for many booster projects through the years. The picture below is of a booster licensed to Fordham University in 2 New York City on a Durst building, the EPIC, at 31st Street in Manhattan. It depicts the system near the end of construction with the Empire State building in the background. 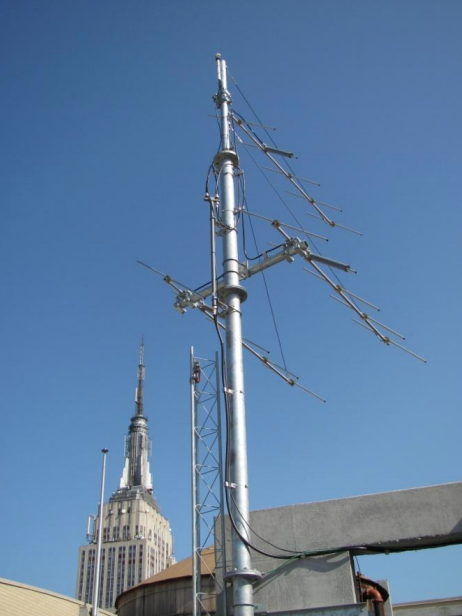 The antenna chosen for this application used Aldena’s 5-element Yagi antennas (type AST05-02-337), tuned to frequency. It is very light weight, easy to assemble, and has high power handling capability and optional radomes.

The radiated pattern for this booster system took full advantage of the EMLAB software and current techniques to manipulate the pattern to fit the application.

For this station, two antennas were stacked horizontally at a spacing to narrow the beam width as much as possible.

Radiation off the rear of the antenna then was nulled to near nothing by adding a third Yagi: a quarter-wave placed “ahead” of the pair just described and phased 90 degrees to provide a deep null.

These pattern characteristics allowed the booster to fit FCC requirements and minimize radiation in directions that would cause mutual interfereence with the main.

On the TV Side

Just as in radio, the TV antenna designs from Aldena may take many forms.

One of the early designs we did using Aldena antennas consisted of eight AST series Yagis installed at WVVH-CD on Channel 50 in Southampton, NY, on Long Island.

This antenna has been in place for approximately 25 years, operates in a salt air environment, and is still running strong at 15 kW ERP DTV.

Pictured below is one of the antennas while still on the test range. 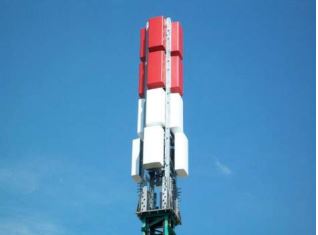 Broadband antennas have been a mainstay of European manufacturers like Aldena in both panel and turnstile configurations.

Aldena’s offerings may be seen on their website at: http://www.aldena.it

Here in the U.S. RF Specialties has represented Aldena faithfully for many years.

John Sims in the RF Specialties of Missouri office has been heavily involved in the sale of Aldena products and has participated in a number of project installations giving him added experience which helps to assure that the client is getting a configuration which best meets their needs.

John and the team at RF Specialties may be reached at http://www.rfspecialties.com/

A Broadcast Engineering Consultant for 40 years, Clarence Beverage is the President of Communications Technologies, Inc., in Marlton, New Jersey.