As usual venders were showing their new wares for 2016 and beyond. And, as usual, there seemed to be almost as much vaperware and empty boxes in the TV and post-production halls as actual, in-production equipment and systems.

You have to start somewhere I suppose.

A Good Show For Radio

Actually, I spent most of my time talking to radio venders and, in particular, tower, tower lighting, and AM and FM antenna venders.

To a person, they all reported that traffic in the radio related booths was on par or heavier than in the past few years and that people were talking about serious projects rather than just tire kicking.

I, and they, are anticipating that the slow economic recovery for radio will ramp up somewhat in 2016-17.

I facetiously asked most of the tower venders if they had any new technology to show. Some had minor changes to existing products or services but, for the most part, the tower section of our industry is like the AM section in that the base technology was mature in the 1930’s.

Of course the standards, equipment and techniques have evolved dramatically over the years but the idea remains much the same.

The tower-related booths were, pardon the pun, “packed” most days with the “picture radio” folks discussing the upcoming HD television channel repack. The problem was that no one really seemed to know when to expect the actual repack auction results, engineering, or operational projects to occur.

Do not Delay Radio Projects

The tower venders all suggested that if we have a radio-related tower project in the works, we need to get it moving and the tower work scheduled very soon.

Otherwise, when the TV repack antenna changes/moves start, all of the tower venders are anticipating that they will be swamped with work for as much as two years. If you recall the period around the initial HDTV build out, it was nearly impossible to find a competent tower crew with an opening for a smaller project.

Thankfully, most of the tower refurbishment and strengthening projects were done at the outset of the HD build-out. Hopefully, this will help keep the waiting list and tower-related accidents to a minimum as the final phases of the HD conversion takes place.

This year it was at the Flamingo and was wellattended as usual. The NUG spaces at the Flamingo were very nice but a real pain to find. I hope no one went over to the Riviera intending to see Jeff and crew do their thing. You would probably have felt a little lonely.

Jeff talked about a lot of things that make transmitters (all brands) go boom and how to keep them from doing it. Other Nautel presenters covered service and product improvements. Lunch was well above average quality for hotel seminar fare and the content was superb.

If you maintain Nautel equipment, NUG should be on your schedule at every NAB. (Yes, other manufactures have similar events pre-NAB at various times (typically Saturday and Sunday.)

Incidentally, speaking of the Riviera, portions of the hotel (the original and long time home of NUG and the NAB base for a lot of us) are slated for implosion in phases in June and August 2016. The site is expected to be clean and available for heavy equipment trade shows after 01/01/2017.

I kind of miss the old girl. The Riv that is… 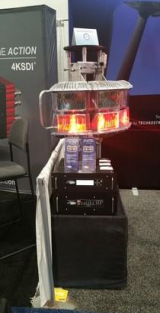 New LED systems were in every lighting vender’s booth.

It uses a single high power red LED for night and not many white LED’s for eyesearing high-intensity daytime strobes.

One thing: they were not flashing any of the white lamps at NAB for fear of retinal damage on the show floor.

If you are not familiar with legacy xenon HI strobes, typically the power supply and electronics is housed in the strobe head with only power and sync cabling run from below.

And by definition, HI strobes are only used on really tall structures, which puts a lot of electronics and power at significant heights AGL (2000+ feet). Drake was also showing a drop-in replacement for standard incandescent side lights.

They operate directly off of 110 V and are designed to replace the standard red globe, bulb, and socket of an L810 fixture.

Removal of the entire fixture is not necessary (and you know what a pain that can be on older systems!). The LED sidelight replacement is roughly the same cost as a replacement red globe, socket, and bulb.

Shively was showing a new field tunable antenna and a redesign of their 6813 intended to improve bandwidth and tuning.

Kintronic Labs now has a smaller, lighter, lower power, broadband inductive cable isolator for AM towers aimed at the proliferating FM translator for AM Improvement market.

They also have a new version of the older, larger model that offers significantly higher impedance across the AM insulator with no change in the V/U pass attenuation. 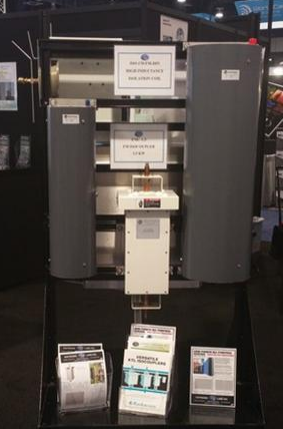 Phasetek was also showing their inductive cable isolator as well as a Voltage sampler for MoM proofed arrays.

As any long time translator operator can attest, translators are often bumped from their frequency by full power stations.

Having an AM isola-tor that is pass frequency agnostic (unlike capa-citive isocouplers that are roughly tuned to pass freq) is a really nice feature.

Both capacitive and inductive isolation techniques have their pros and cons and their place in the real world and should be chosen based on best engineering practices.

Several venders were showing new or redesigned coaxial patch panels and switches. One of the most unique patch panels I found was in the booth of Exir Broadcasting of Sweden.

Typical of most things Swedish, their low (nearly zero) insertion force patch panel is a work of art. Quite literally very pleasing to look at. Using mechanical advantage and intricate mechanisms, even a large patch link can be moved easily with one hand and no tools.

Simply flip a lever on the link, rotate said lever and the link is easily unplugged. Interlocking senses when the lever is partially unlatched for protection of the patch panel, equipment, and personnel.

No price was available for this unit at showtime, but I am going to guess that it is significantly more expensive than common manual patch panels. Still if there was a need to switch coaxes regularly, but not regularly enough to warrant a motorized switch, this would fit the bill. (Not to mention that it looks like it could be used for routing plasma conduits on the NCC-1701.)

Even though it is well outside my journalistic assignment, there were the drones.

Giant drones, nano drones, drones of every color, shape, and price. The first drone that I recall seeing at NAB just a few years ago cost tens of thousands of dollars. This week you could spend that and more but there were many others on display in the $200-500 range.

I personally own a DJI Phantom3 Pro that I fly for pleasure and the occasionally useful (uncompensated, non-commercial, unconnected to business of any type, no hitch hiking, no riders, do not ask) flight. It will lift about three additional pounds for 10-12 minutes.

After seeing the heavy lifter drones fly with a large TV camera for 30 minutes I want one.

Another departure from my tower-to-transmitter assignment was an interesting stop in the Central Hall booth of Soundproof Windows, Inc.

They supply glass for radio and recording studios (or any other purpose where you wish for reduced noise transmission). You are probably familiar with the old technique of building windows with two common glass panes at an angle to each other to reduce the noise transmitted through the glass and the air space between.

SWI has a technique that uses two carefully chosen (and different) thicknesses of glass laminated to a 3rd inner layer (think safety glass). This achieves many dB more attenuation than if it were a single pane of glass.

The different thicknesses of glass and their special window and door frames are also designed to block and stop sound leaks around the glass and framing, while basically being a drop-in replacement for common window and door sets.

Of course, if you have a wall that leaks sound like a sieve, high dollar isolation windows will not do much good.

You Knew it Had to Happen

In today’s networked world, almost everything of consequence has a network connector (and sometimes more than one) and built-in web or communications server. Modern transmitters, processsors, consoles, satellite receivers, switchers, remote controls, etc, are almost all remotely addressable via the ever present IP connection.

This year’s NAB debuted a new IoT broadcast device that really drives home the notion that everything will be networked in the very near future. I said everything.

The broadcast device that I am leading up to? A dummy load which makes that common name something of a misnomer. Altronic Research was showing their new network-aware air-cooled loads (I now hesitate to call them “dummies”).

This new load is actually a standard air cooled dummy load with the addition of an IR temp sensor that very accurately measures the temperature rise (versus the ambient) in the RF elements and then calculates the RF power needed to cause that amount of change. A front panel LCD displays the calculated power and a web server makes that reading remotely available.

At first glance, a network-aware dummy load seems a little superfluous but, in today’s SNMPmonitored broadcast plant, having a reject or dummy load’s power relayed directly to an SNMP server makes perfect sense in the grand scheme of integrated big picture site monitoring.

It was good to see the venders busy with actual customers and was told by several that they had show orders in hand beyond their expectations.

I can personally attest to the fact that my bill paying alter-ego (AM Ground Systems Co.) had more conversations with serious clients than in the past several NAB shows put together.

The slow improvement in the economy coupled with the FCC’s AM Revitalization plan seems to be spurring some movement on general AM projects.

And that is good news for everyone!