Driving to the Beat of a TomTom XXL-540S

[May 2010] The GPS system is responsible for many nice improvements in life. Finding the best GPS receiver for your use is not always easy. Rich Wood shares his experience with one unit you might be considering.

If someone told me as a kid that floating objects in the distant sky would guide parts of my life on the ground I would have thought they were nipping a little too much. I may still think that, but, from personal experience, I know it happens. The stuff in the sky, I mean.

My first GPS was the size of a lunchbox. I cannot get maps for it, anymore. The software that came with it allowed me to overrule the unit’s routing and plan a trip that I could upload. It also did not know which side of the road it was on. The “arriving at destination” announcement always gave me the wrong side of the street.

Recently I was asked to review one of TomTom’s newest GPS units; I got hold of an XXL-540S model. 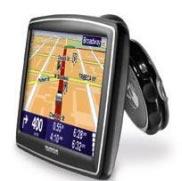 I own three other units from two competing manufacturers. I have to tell you this one gets my vote. The 540S has an information-filled five inch screen and a British Gentleman’s voice that lets me close my eyes and pretend my vehicle is a Rolls Royce. (However, unlike my fellow drivers I rarely, if ever, drive without my eyes open. It is frightening.)

There are a few features on this unit that seem to be no-brainers in a GPS, yet none of my others have them.

For example, I drive in the Northeast Corridor on multi-lane highways. If you have ever driven these roads you know the speeds make the old Concorde seem slow. It is very easy, particularly when moving from freeways to city streets, to miss a freeway exit.

With the TomTom, when a driver approaches an exit the screen changes to a depiction of the highway with separate lanes. The lanes you need to use to make the exit have a green stripe to indicate where you should be. 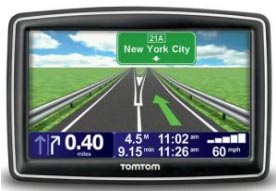 The TomTom XXL-540S clearly indicates which lane you should take

My previous units never warned me that I would have to cross four high-speed lanes to get to the lefthand exit. With the TomTom, the green stripes appear well in advance to give you time to safely cross those lanes. I found it invaluable when I merged onto a heavily-traveled Interstate from a State highway and discovered I had about a half a mile before I had to make a left exit.

The Right Information at the Right Time

My major complaint with my previous units has been the fact that I can be almost at the turn before the unit tells me I need to turn. The TomTom starts warning the driver at 800 yards, then 400, then to “turn right.” The display has the usual visual arrows.

The five-inch display provides room for a lot of data without overload. During a recent trip in unfamiliar territory, I got to feel very comfortable that there would be no surprises. On a divided highway with two lanes my direction was displayed in red and oncoming traffic in blue. The red display also has lane separation markers.

On highways where its maps are programmed with speed limits the TomTom displays the limit to the side of your actual speed. If you exceed the limit by about three to five miles per hour it flashes red and sounds a siren. This could occasionally cause a little embarrassment: when I called 911 to report a drunken driver who nearly sideswiped me, I was on the phone (hands-free) with the Police only to have the siren sound! Like the old NAB code I would prefer something not so startling. Fortunately, you can change it. On the other hand, one selection is the sound of an approaching train – if you select it, you may need to keep a package of Depends handy.

I also appreciate the current time being displayed just above the arrival time. 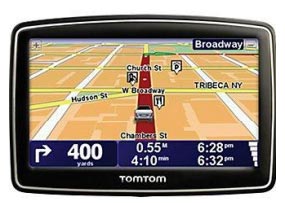 The arrival time changes depending on speed and congestion. We can call this good stuff.

The XXL-540S has the usual recalculation ability that higher end units have. It also has a couple of interesting routing features. One is called IQ Routes™ and the other is Map Share™.

Map Share allows each user to touch the screen’s button and report an accident, construction or other temporary delay. The report goes to TomTom for validation and it is immediately available to those with wireless connections. (If you connect the unit to a computer and update it just before a trip that information is incorporated in the routing calculations.)

Those of you with an iPhone can find an app for the TomTom that supplies updated traffic every three minutes. Since I do not trust traffic services (Having spent more than twenty years in New York City I have very little faith in over-the-air voice or digital traffic services), the astoundingly expensive (by iTunes standards) $59.99 app does not appear on my iPhone. More to the point, I think monitoring two devices while driving might be ill-advised.

Much like the iPhone there are apps you can download for the TomTom itself. Some are free, others seem to rival the financial industry’s bailouts. They display reasonably up-to-date fuel prices, all sorts of local points of interest, and a couple of screens for dealing with emergencies. And, you have the option of driving or walking directions. (Local traffic regulations have many screens but they appear very Eurocentric.)

I liked the unit enough to buy one. It has far more features than I can imagine myself using.

While this unit is feature-packed it can be considered fairly basic. There are no receivers for it. At least I could not find any on their web site. It has no card slot, though they offer additional maps on cards. Maps are updated four times a year at about $70 a pop. The basic map on this unit covers the US, Canada and Mexico. If you travel the world additional maps can be downloaded, for a price.

The main complaint I have – and user reviews back me up – is the mounting bracket. It has the usual suction cup mount to the windshield as well as adhesive dashboard top mount disks. TomTom calls it the “EasyPort™” mount but that is a misnomer. It should be renamed the “ToughPort” mount. 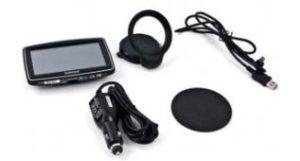 Display and mounting materials for the XXL-540S

I mounted the unit on the left side of the windshield far enough down so as not to obstruct any of my views. The back of the unit has a speaker with a raised flange. The mount is a round piece of plastic that snaps around that flange. Unlike my other units the connections have to be made by manually plugging in a mini USB plug (my last GPS connected as I snapped it into a simple clip).

My hands are relatively small as hand sizes go, and I have to struggle over the steering wheel to plug in and mount the unit. With large hands you might want to leave it mounted and risk theft rather than struggle each time you need to use it. I want no wires dangling over the dashboard to the power plug (formerly known as the cigarette lighter) so I mounted a spare power plug out of sight and just keep the cable plugged in at the source end. All but the GPS end of the cable is concealed, but I still have the mount plus a short length of cable sitting by the left side of the windshield.

I vote no raise for the mount designer this year.

Another minor annoyance is the fact that I have to manually turn it on. After struggling to mount it, pressing the power button is another struggle and the pressure on the button often pulls it from the mount. Fortunately, you can fool it into shutting off by telling it to shut down when external power is lost.

These are minor annoyances that would not stop me from buying it, again. I find it hard to explain but I feel more secure with this GPS than any other I have owned. Be careful not to get mesmerized by what it may be doing. This one gets four out of five stars.

Rich Wood has worked in tech, programming, and management at local stations and network operations. You can contact Rich at Rich Wood Multimedia headquarters: richwood@pobox.com