Things happen as equipment ages, especially after it has been in service for over ten years. Keeping older broadcast gear going past its support life, as determined by the manufacturer, sometimes takes older gear right to the edge – or right over the edge. My war story is called “Death by Capacitor.”

It was an unusual case that made our DX-50 act a little weird, the evening our BE C-Quam AM Stereo generator went nuts.

The symptom was that the Day/Night equalizer switching had become erratic. When the C-Quam was switched back on with the main transmitter at about 7:30 PM, the transmitter started going into overloads, dropping off the air.

As I worked through the transmitter, I discovered the problem. The stereo generator Day/Night settings were both on, and the switching was going from erratic to working to not working. Actually, we do not need any of the equalization changes that the exciter could provide but the switching relay pushes the signal in and out of that board.

The funny part is that the transmitter design offered no panel light indication that the PLL was not locked, except to show that the “mute” was activated. As I worked the Day/Night switch it got worse, becoming very erratic. It was going crazy as the switch was trying to make both modes go.

As it turns out none of those Day/Night adjustments are even used in this installation. It was a carryover from the days of transmitters with iron. However the audio signals go into and out of Day/Night board. Once that relay went erratic, sending two sets of signals to the modulator, it was troubling to the transmitter.

As I worked through the circuit, the operation of the switch’s flip-flop was stable. However, it turned out the parts after the flip-flop were not. As I looked at parts I suspected high value resistors such as two 1-meg ohm resistors, various diodes in the circuit, and some PNP transistors. Each of the many parts were measured and almost all looked good, reading on the DVM just as marked. The only clue was some goo by the IC socket.

Finally, checking the 100 uF capacitor, I found it measuring only 74 uF. A closer inspection showed the capacitor had spilled its contents and eaten away a trace on PC board.

This trace was connected to the mute signal to stop Day/Night adjust switch selection. In fact, the trace was eaten completely open! This is a case were the capacitor’s chemical leakage actually ate away the foil path. Failure was from the chemical action; the picture shows the damage. 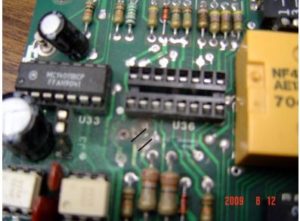 I have only seen this happen one other time. This particular unit is a BE brand AM stereo generator and is above average in construction. It is now probably about 19 years old; it really was made to last.

Solving the problem entailed cleaning the pc board and replaced the missing trace for mute disable. It appears the 2004 IC was damaged, but the affect is to status LED and did not affect the relay switch.

It was an interesting case indeed, really taxing the skill-set in diagnosing a simple flip-flop circuit.

The lesson learned is electrolytic capacitors need to be changed out after ten service years – and must be done at 15 years even if the gear still appears to be working. The danger is not just the loss of component value but the goo oozing out from bad capacitors. For this unit it is clearly time to blitz all the capacitors

Warren Shulz is the Chief Engineer for WLS in Chicago. Contact him at warren.shulz@citcomm.com