[August 2011] When you are working out in the field, sometimes the only available power to drive everything from a light to a computer comes from the car battery. However, turning that DC into usable AC power may take more than just any DC/AC inverter that is handy.

The critical issues that need to be addressed for power inverter installation and operation in your mobile laboratory/workshop are:

Excellent DC to AC inverters are not impossible to find. In fact, pure sine-wave inverters now rule the market. The older modified sine-wave units offer little with respect to the price/performance/effects ratios.

Technological evolution has progressed to the point where yesterday’s ―wish list‖ of features is now a standard. Pure sine wave inverter prices have declined substantially while standard features continue to accumulate and improve. (Inverter pricing is approaching $0.15 per Watt. It was not that long ago when it was $0.50 to $1.00 per Watt. The small inverters tend to price out at $0.25 to $0.30 per Watt.)

The primary mechanisms for the advancement of inverter technology are the magnetic materials in the pulse transformers and the semiconductors. Switcher rates are well into the MHz region and the efficiencies are above 90%. Thus, a sine-wave can be partitioned into sub-microsecond slices, fed through a transformer as pulses, and filtered.

It helps to understand that modified sine-waves are generated in steps.

The most frequent format used for this type of waveform has eight distinct steps per cycle (numbered 0 through 7). Each step in the waveform is 45 degrees. It can be generated by a simple three (3) stage binary counter chain. 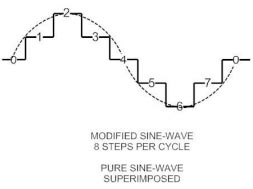 The smallest pure sine-wave inverter that I could find is rated for 180 Watts. Small power inverters, like the one depicted here, are excellent for having instant AC power in the field. 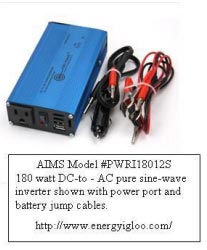 Some inverters have USB ports with a power management-monitoring software package. USB seems to be creeping in as a standard feature.

Automotive DC Power Ports (AKA: cigarette lighter sockets) are very convenient. However, they are marginal for inverter use. Many inverters cannot be operated at their rated output power due to limitations invoked by the voltage drops of the power port socket, wiring, and its fuse.

Generally speaking, I give thumbs-down to DC power ports.

Extracting power reliably means connecting the inverter directly to the vehicle’s battery. The power inverter should have its own set of feed wires and fuse.

Connecting to the battery as directly as possible allows you to take advantage of the battery acting as a giant filter capacitor. The battery will absorb spikes and transients that may plague a power port. A direct battery connection also diverts the load from passing through the ignition switch, or through accessory relays.

So, using a direct connection to the battery rates a thumbs-up from my point of view.

Nevertheless, before you buy anything, stop! This is the time to apply common sense and make your decisions by weighing the options and consequences:

1. Is your vehicle warranty still in force? Will the warranty by jeopardized by this project?

2. Can the project be done without making any alterations? (Stealth installation)

3. Do you have the skills and tools to do the task yourself safely?

4. Are you familiar with standard safety practices for working with automotive electrical systems?

5. Does your vehicle’s electrical system have a master fuse or is it a bare backbone buss with no master fuse? Do you know the current rating of the alternator?

6. Are you willing to sacrifice the use of climate control in exchange of running the inverter at high power levels? (Climate control means running air conditioning, electric circulation fans, and/or engaging electric compressor clutches.)

In fact, before doing anything, go to your local auto parts store and buy a replacement master fuse. Having a spare on hand will prevent you from being stranded.

Sizing Up Your Electrical System

As the man in the movie said, ―A man has to know his limitations.

Similarly, it is important to know the limits of your car’s electrical system. The last thing you want to do is to cause an electrical fire in your vehicle – or even to melt insulation off of a wire in a hard-to-get-to place.

For that reason, start any installation by studying the fuse inventory listed for the Master Fuse Block. It is usually located on or near the firewall of the engine compartment. Often one or more fuse locations are unused.

As an example, I use a spare fuse location in my vehicle to run an inverter to power levels up to 300 Watts.

As you look at the diagram of my vehicle’s electrical system on this page, notice the inverter is attached to a spare 40 Amp fuse in the fuse block.

Hints on Wiring and Fuse Sizing

Fuses are rated in accordance in how much current they can handle in a specific time frame, usually 30 to 60 minutes at 110% of the rating. At 600% of rating, the opening time of a type ATO® (blade style) automotive fuse is less than 100 mSec.

*Power port fuses are rated in accordance with the port socket, which is usually rated for 10 Amps or less; wire is assumed to be bundled in a harness on is way to the dome lights, courtesy lights, etc.

Power wiring losses are the enemy.

The customary shut-down rating for under-voltage is approximately 11 Volts. Therefore I would highly recommend you to set up a voltage drop budget of 0.250 to 0.500 Volts in order to obtain reliable operation with a source of only 12 Volts.

The only practical way to decrease the voltage drop is to use larger wire, say #8 AWG. A cheaper alternative is to raise the terminal voltage of the battery by running the engine, and allow the alternator to keep the battery topped off at 14 Volts.

There are several trade-offs to consider in regard to using a two-wire battery power delivery vs. a single (+) wire, and using the chassis as the return (-).

The contact of two dissimilar metals, which produce electrolytic effects, can be a problem where copper or brass hardware are in contact with steel as in a one wire system.

Using two copper wires to convey DC power eliminates this problem. Existing chassis ground points are plated to prevent electrolysis. Making a new ground point by drilling and tapping a new hole, and scraping the paint to expose the plating on steel may lead to corrosion problems and power losses later on.

It is much better to loosen an existing chassis screw, and retighten it onto the ring lug of the return (-) wire.

This is not an option to be thought of lightly.

For example, there are power inverters out there with a capacity of up to 6,000 Watts. Power levels of that magnitude definitely place the project into dual electric system territory.

To keep DC current at manageable levels, a 24- Volt or 48-Volt DC system must be considered. The DC current can run up to 600 Amps, which level really demands a copper buss bar.

Additionally, other safety issues arise just from the presence of 48 Volts. This is definitely an extreme case, and it is out of scope for an amateur mechanic.

A thousand Watts (AC) is equivalent to a current draw of 100 Amps at 12 to 13.8 Volts DC. The extra engine load is about two horsepower (HP) at 75% overall engine efficiency. This extra load will burden the engine, its cooling system, the electrical system; and especially the alternator.

You may also need a ―High Idle‖ setting (selectable under manual control) to keep the engine from stalling due to the added load. Entertaining the thought of using more than 1,000 Watts may require a service level vehicle with two alternators and two batteries, with one of the batteryalternator pairs dedicated to the inverter alone.

Therefore, the project will require a substantially larger alternator. As a start, a larger alternator rated at 100 Amps above the one in the vehicle with a larger battery should be considered for a 1,000 Watt inverter. Then ask yourself:

If you intend to take AC power outside the vehicle cabin to the great outdoors, then make sure you use an extension cord with a built-in Ground Fault Interrupter (GFI).

The rubber tires will float the inverter, but stray current flows are still a danger. The GFI will shut off the AC if you happen to become a stray power leakage path.

Once installed, always turn off or disconnect the inverter when it is not in use. Otherwise, the inverter will drain the battery. A simple switch should be utilized to make this quick and easy.

Finally, avoid using the heater or air-conditioner while running the inverter at elevated power. This will provide extra margin for the inverter’s operation.

To get a perspective of your real needs, make a list of the equipment and the AC power requirements of each. Here is an example list.

*For laptops, often a separate DC-DC converter (12 Volts to 19.5 Volts DC) is easily powered by the vehicle’s power port, and thus the power drain of a laptop can be diverted away from the DC-AC inverter.

Keep your expectations in alignment with your vehicle’s electrical system’s capacity.

Draw power directly from the battery to take advantage of its behavior as a giant capacitor.

Keep the inverter inside the cabin.

Avoid mounting the inverter in the engine compartment. Inverters are generally not water or weather resistant. It will probably not fit anyway.

The high temperatures under the hood will degrade performance or trigger thermal shutdown.

Live within the means of the resource; do not fall into a ―mission-creep‖ trap.

When delivering AC power from the vehicle to the great outdoors, use an extension cord with a built-in GFI to compensate for the voltage float that may be caused by the rubber tires.

Finally, to give you an idea of the different sized units available, let me give you a peek at the DC-AC inverters that I carry in my vehicle. As you can see, they are capable of covering a wide range of needs and equipment combinations. 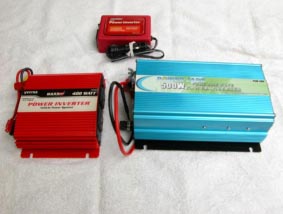 ATO® is a registered trademark of Littlefuse Inc.