[August 2012] This has been a brutal summer for power companies. A nasty storm blacked out a large part of the mid-Atlantic area for days, and then we got reports of nearly 700 million people in India losing power. Is there anything you can do in such situations?

When a major emergency breaks out, people want immediate news, information, and instructions on what to do to be safe and secure.

Yes, there may be a lot of choices, but once the power grid and the cell phone batteries go down, those choices narrow to one: local radio. After all, as has been said, “in the final analysis, all emergencies are local.”

But, if the power grid is down and you are not in your car, how do you stay “connected” – especially as the outage lasts hours and/or days?

This problem is not new, of course. Especially in places like Africa, aid groups and manufacturers have contended with intermittent – or non-existent – power sources. Many villages to this day have no power. Replacement batteries are expensive, when they are available.

Thus, radios that can be charged by a handcranked dynamo or by solar cells became a lifeline to millions of people. (Recently, even some hand-cranked computers have been developed.) Increasingly, this technology is now easily available everywhere.

A standout among emergency radios is the CC Solar Observer from C. Crane.

As you will see, this radio is far more than just a radio. 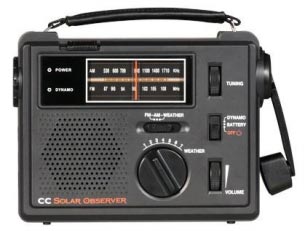 This well-thought-out radio is just what you want to have when the lights go out – and the rest of the time, too.

I have tried a number of different hand-cranked radios. One thing is for sure: you can certainly build up your arm muscles!

After doing my exercise for the day (!), some of those radios lasted but a few hours on a full charge on NiCads or even a set of regular batteries. In contrast, the CC Solar Observer runs 30 hours or more on a full charged set of NiMH batteries. This is because at moderate volume the AM radio only pulls about 14mA, the FM and weather radios take about 22 mA. The LED flashlight takes only 15 mA.

Here is, perhaps, the best indication of how well this radio performs. I purposely ran the batteries down. Then I took the radio out in the back yard and pulled the solar panel on the back of the radio into a position looking at the sun.

I literally turned the hand crank just one time to get it started, and the radio continued playing as long as I sat with it. Now, that is an efficient combination of solar panel and radio!

True, if you are not in direct sunlight or under clouds, you may have to assist a bit more with the crank, but I did try it indoors under a skylight, and it really did not require constant cranking. And, if you are really in the dark and tired, it only takes 3-AA batteries, and you are back in business. (One caveat, when using the radio in full sunlight, remember that the plastic melts around 195 degrees, but that should rarely be a problem.)

As I write this, I am indoors, listening to a Class A FM station, 1.6 kW ERP at over 15 miles, with no problems whatsoever.

On AM, again indoors, I am pulling in a 4 kW regional station 125 miles away. Outdoors – and away from the computer – it is much clearer. In an emergency, with no RFI, I feel confident I would be able to hear any station needed.

Both AM and FM are on an analog slide-rule tuner. While you might think that a digital tuner would be easier, there are two points that jump out at me: (1) the analog tuner uses less power, so the radio plays longer on a charge, and (2) if and when the batteries do give out, just a crank and you are back up – without having the digital tuner turn off and/or lose the station while the power is out.

Using the seven-position selection you can get the local NWS weather channel pretty easily.

The left side of the CC Solar Observer radio contains a headphone output, power in and out, and an LED flashlight.

Since cell phones also will lose power after a while the CC Solar Observer will allow you to power up for a call when necessary (assuming the cellular networks are up and running).

The package includes adaptors for many of the popular cell phone and PDA adaptors, so you can plug right in and get enough power to make a call in just a minute or two.

All in all, the CC Solar Observer is the first on my emergency “To Go” kit list. At a street price well under $50, you should have one, too.

Maybe two, for home and car.

While we are on the topic of emergency items, perhaps you would like a bit more light than the CC Solar Observer is designed to provide. Or to be able to carry the light away from the radio.

C. Crane has it covered.

The CC Lantern can provide up to seven hours of light on the rechargeable batteries – but a little cranking and you will never run out of light.

Let There Be Light 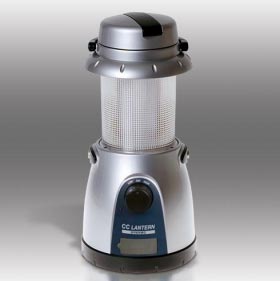 And then there is the hand crank. No matter the situation, you can make light. The high efficiency of the LEDs along with the dynamo means that you will get anywhere from three to eight times the length of your cranking in light output.

Alternatively, the car adapter allows you charge the batteries from your auto. Or, an optional AC adaptor can power the unit when there is regular power available. 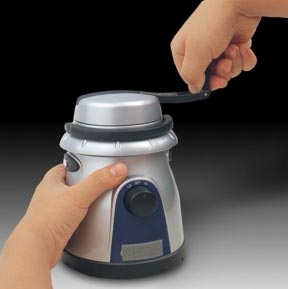 The hand crank works in both directions

Similar to the CC Solar Observer, the CC Lantern has a USB output to charge your cell phone – or some other low draw item – when there is no regular power.

The crank generates 3 Watts at 400 mA which, roughly speaking, will power a call phone in talk mode for a similar length as the cranking time. (In standby mode, five minutes of cranking will keep your cell phone running for as long as 2.5 hours.)

Finally, the CC Lantern also features a modest alarm. If you need to alert someone to your location, the lantern provides a yelp that should get attention.

The CC Lantern also retails at $50 but can be found for less at the usual places.