[May 2010] With more and more stations operating unmanned at night and weekends, remote control systems are more useful than ever, especially with the enhanced capabilities that web interfaces, etc, have added. It is – or should be – easy to see exactly what is going on, whether you are in the studio or a thousand miles away. Jonathan Bowen was looking for an economical unit and tried out the WVRC-8.

Broadcast Tools’ WVRC-8 turned out to be a mixed bag. A remote control system that features web-based and voice-based controls, it also has some unique features such as an integrated silence sense with alarm, a power failure alarm, and a temperature sensor. On the other hand, it is marred by a less than desirable interface.

The unit has eight analog and eight digital inputs. Additionally, it has 16 relay outputs – eight of which are SPDT and eight are SPST. A simple telco hybrid provides the ability to listen to audio from the silence sense and an external microphone. All of this is housed in a small 1 RU package with removable screw terminal connections on the back.

Front and back views of the WVRC-8

This unit is feature rich and rather inexpensive. Its combination of web-based and voice-based interfaces allows for a wide range of control option, for example, being able to check audio sources and even listen to the room through the microphone are good ways to check those problems that often are hard to pin down remotely.

With those features, it does sound like a great unit that every broadcaster might want but not everything is perfect with this device.

The relay interfaces are good but lack the finesse that comes in handy in those unique situations. For instance, none of the relays can be set to latch. They are all momentary. Also there is no scripting or macro ability; that limits the unit to functioning as a passive-only device.

However, my biggest issue with this unit is that it may have two interfaces but neither one is all that good.

The issue is that the interfaces are completely independent of each other. Since you cannot set up the voice interface from the web interface, nor confirm/synchronize the settings, this can easily lead to confusion when one interface may be set to alarm for different reasons or at different values than the other one. 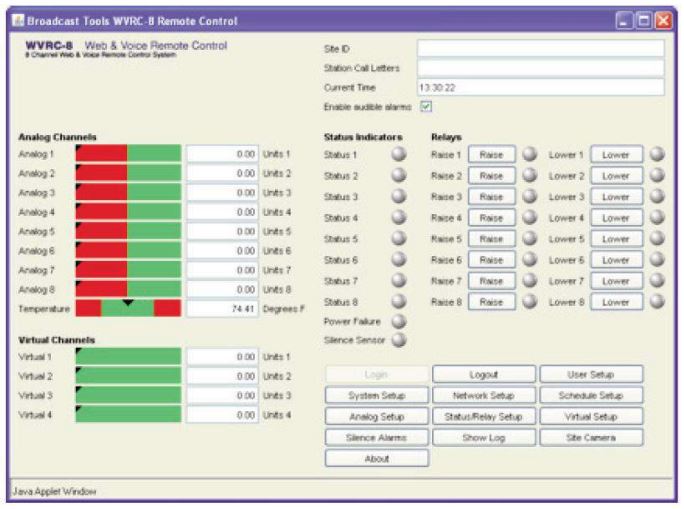 Another major problem is that the web interface is java based and not html based. I have found that most mobile phones will not open the applet that the site uses.

It is also rather slow and not very intuitive. This is shown by small things such as when, after you enter the user name and password, you must click “ok” because simply hitting enter does nothing. Also if you enter the password wrong there is no message or indication at all. It just returns to its initial state.

Furthermore, I have found that using this interface through the Internet is painfully slow. It is slow when used directly on a LAN, but over the Internet it is common to see two or three minute wait times as the interface loads. Sometimes it can take as long as five minutes to load. Clicking a setup button can take several minutes to open the dialog box.

You cannot set the time without using an Internet service which can be a problem for some. Honestly, my list of these little irritants could go on but, in short, the web interface is so bad it is almost unusable.

The voice interface is a little better and is the best option for control after the learning curve has been conquered. Its main downfall is the manual.

For example: alarms can be enabled and disabled remotely which is nice. However, the manual is rather unclear on exactly how to clear an alarm. Some of the commands are confusing and prone to do other undesirable things such as suddenly closing a relay while you are trying to clear an alarm.

If an alarm is not cleared, the unit will just call you right back until you reset it. Additionally, you cannot review what alarms have been triggered without reconnecting; you get a list before you enter the access code – but that is all the indication you get.

A lot of these problems would be easier to overcome if the manual was written a little better. It is usable and rather cheap, but it still feels like a beta version. If some of the bugs where worked out and a little more thought put into the interfaces it would be a great remote control solution.

In short look for version 2.0 of this product.

Jonathan Bowen is the Chief Engineer for WPCS in Pensacola, Florida. He can be reached by email at jonbowen234@gmail.com