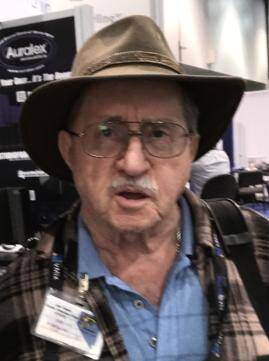 One of the nicest guys in the radio business, Bill Croghan WB0KSW, passed away Saturday, November 9, 2018, less than a day after entering hospice in Las Vegas, suffering from lung cancer. He was 74 years of age.

Bill Croghan was born in Alden, New York, where he graduated from Alden Senior High School. He then studied Music Education at the State University of New York at Fredonia. During that time, he became interested in radio, buying a CB radio in 1962 from Olsen’s Electronics in Buffalo, NY and acquired the call sign KLP-6464. This led to a gig at the college radio station as a DJ, radio newsman, television newsman, eventually drifting into the engineering.

After University, Croghan joined the Air Force. A Vietnam era veteran, He served as a Sergeant, and was an Instructor in Electronics Intelligence. He has served several decades with the Civil Air Patrol and was a Lt. Colonel with the Nevada Wing at the time of his passing.

He also once worked as a professional photographer taking school pictures.

Croghan, along with his wife Cecile “Ski” KA7QEH started Broadcast Radio Services in 1980 while residing in the Denver and Colorado Springs areas of CO. Later, they moved to Turlock, CA and Tucson and Sierra Vista, AZ, before coming to Las Vegas in 1998. While in Arizona, he was the Chief Engineer for Behan Broadcasting, and very active in the Ham community.

For twenty years the Croghans had resided in Las Vegas where he had become a stalwart of the local amateur radio community as well as co-chair of the EAS SECC, and notably supportive of the Nevada Broadcasters’ Association. He was the Chief Engineer for Lotus Broadcasting where he oversaw the eight local radio stations until he retired at the end of September 2017.

The Croghans were Life Members of the American Radio Relay League. Additionally, he was a member and past officer of the Las Vegas Radio Amateur Club, a member of Clark County ARES/RACES, a member of Air Force MARS, the Civil Air Patrol, a SKYWARN volunteer, and a Volunteer Examiner for both the ARRL and W5YI VEC’. He also was an examiner for National Radio Examiners which tests candidates for Commercial Radio Licenses – and often helped train new hams.

Croghan was the 1991 Arizona Ham of the Year. He also was a member of the BؚO Amateur Radio Fraternity and the Straight Key Century Club. He was also the trustee of the K7UGE repeaters, volunteering for and supporting nearly every public service activity which required amateur radio communications.

In recent years, Croghan was inducted into the Nevada Broadcasters Hall of Fame. He was the Chairman of Chapter 128 of the Society of Broadcast Engineers and an Adjunct Instructor at the College of Southern Nevada.

In addition to wife, Ski, Croghan is survived by his sister, Gail Nelson, and daughter Angie Wilson Bashaw.

At Croghan’s request, there will be no services or memorials.

Our sincere thanks to John Higby for much of the information, and Paul Walker for the picture.