[November 2015] Digital technology has brought about many changes in the broadcast industry, including how we monitor a station’s signal with our test gear. Belar’s Mark Grant explains what happens when you mix analog and digital information on one station.

One of the biggest challenges that HD Radio broadcasters face is separating analog and digital signals at the modulation monitor.

There are thousands upon thousands of analog modulation monitors in operation at FM stations today, most of which were installed with no preexisting knowledge of a future HD Radio signal presence.

These are wideband monitors that can pass well over 100 kHz of composite audio – and occasionally as much as 150 kHz.

The difficulty arose as HD Radio carriers were added and hybrid analog/digital signals became common, broadcasters recognized that a significant amount of self-interference was introduced into the total modulation measurement.

That interference actually raises the modulation levels, which makes it difficult to attain an accurate total measurement in the presence of HD carriers. This often leaves broadcasters with two choices to monitor their total readings:

The first option is certainly less than ideal, as turning off the HD carrier kills your on-air audio and data in the process. The last thing broadcasters want to do is alienate the audience, especially given the modest listener base for HD Radio.

On paper, the second option sounds like a viable solution.

Unfortunately, this process has become much more difficult with the FCC-approved increase in HD sideband power from -20 dB to a maximum of -10 dB, with many HD Radio broadcasters operating at -14 dB. Regardless of the actual level, the higher HD carrier power is raised, the greater the increase of noise and interference into the total measurement.

Improvements in the software-defined architecture of modern modulation monitors have laid the groundwork for filtering and peak weighting enhancements. These improvements can positively affect accuracy of the total measurement.

Today, there are a few points where you can successfully apply filtering. The first strategy is to apply filtering on the actual RF spectrum, before being fed into the FM demodulator. This application adds a bandpass filter which passes roughly plus or minus 100 kHz suppressing the HD sidebands so that the FM demodulator sees only the analog signal.

The downside is that distortion is created while band-limiting the FM signal, causing errors in the measurement. However, those errors are usually far less significant to the total measurement compared to the HD sideband-influenced modulation increases.

The second filtering point follows the FM demodulator, where the composite baseband signal exists. It is possible to band-limit the signal at this stage.

In a typical analog configuration, the signal may contain SCA subcarriers, requiring a minimum 100 kHz bandwidth. Upon removing SCA subcarriers from the air chain – which is increasingly more common – the bandwidth of the composite filter can be significantly reduced. This is achieved by bringing the 100 kHz bandwidth down to 57 kHz, which allows for passing only the RDS subcarrier.

With everything but the RDS eliminated, the broadcaster wipes out as much as 50 kHz from the spectrum, along with a significant amount of noise, thus lowering the total measurement.

It may be helpful to look at a real world example that demonstrates how self-interference effects analog modulation readings.

Here we show the modulation results of a 1 kHz L+R audio at 90 % with 9% pilot Analog Test Signal with HD carrier power levels of -20 dB, -14 dB, and -10 dB, using the Belar FMCS-1 with its variable RF and composite filtering. 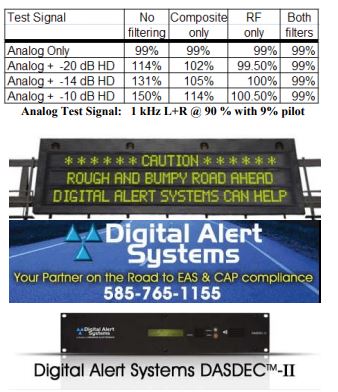 By removing those peaks, the broadcaster can bring down the total modulation. This is especially useful when monitoring off-the air.

In summary, broadcasters with a sizeable noise floor can remove most of these undesirable artifacts from the HD signal through an intelligent and thorough filtering strategy.

Belar simplifies this for the broadcaster by building composite filtering and peak weighting algorithms into our FMCS-1 and FMHD-1 mod monitors. Additionally, the FMCS-1 also incurporates RF filtering for attenuating HD carriers.

These features enable the broadcaster to confidently make accurate measurements in the presence of HD Radio carriers, including at higher power levels.

Mark Grant is CEO at Belar Electronics in West Chester, PA. You can contact him at mark@belar.com