[September 2012] Sometimes transmitter sites can get warm – even in relatively cool climates. Some way to send an alarm before it gets too hot would be nice. Richard Rudman agrees.

I cannot claim I thought this up. However, I do know a good idea when I see it. And this is one is well worth passing on.

This is an idea for an inexpensive, reliable way to let you know when a room full of critical expensive equipment gets too hot before it is too late. A clever broadcast engineer whose name I do not know worked this one out.

Action on an idea is based on need. A locked room full of program automation computers cooking in 90 degree plus heat supplied that need for me to copy that engineer’s bright idea.

He took a home thermostat that can tell an air conditioner or heater to turn on – and wired the closure for cooling to a status input for the site remote control system.

There are certainly many devices that can do this, but none of which I know that you can buy at your local hardware store for under $30, including tax, and that can be easily wired and programmed and comes with its own wall mounting hardware. 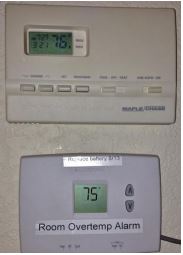 After identifying the correct terminals with a meter and connecting a pair of wires to them, I mounted the alarm thermostat base under the room thermostat and snapped it into place.

The upper unit controls the air conditioner. The lower unit serves as an alarm.

The normal room temperature range is 72 to 75 degrees as indicated on the real HVAC control thermostat. The “alarm” unit agrees within one degree. Since the highest room temperature I have observed with the AC running normally is 76 degrees, I set the “alarm” to 82 degrees.

The room already has an eight-channel remote control unit with an unused status input, so the rest of the project came together in a matter of minutes.

All you need to do is locate the Normally Open contacts on the back of the thermostat, and connect them to the remote control status input. 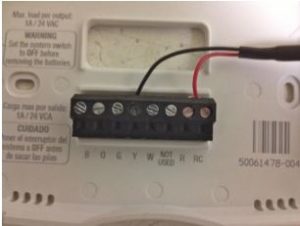 The NO wires connect to the remote control status

(With many, if not most remote controls, you could use the Normally Closed contacts and just reverse the status input)

I have since installed three more Honeywell thermostats at various transmitter sites, wired the closures to a Burk remote control status input, and programmed the ESI voice to speak “Transmitter Room Hot” if the alarm is triggered.

This same idea could be used to tell you about damaging freezing temperatures inside transmitter buildings as well as heat problems. I selected a $24.97 heat/cool thermostat unit (found at either Lowes or Home Depot), made by Honey-well. It can do both alarms.

All in all, this easy project idea provides neat, cheap insurance that I will not be surprised by any temperature extremes at the transmitter sites.

Richard Rudman is the Vice Chair of the California SECC and a Core Member of the BWWG. Contact him at rar01@mac.com