A Fence that Secures the Transmitter Site

Written by Michael A. Golchert Posted in Site Operations.

With copper theft continuing to cause major problems at stations, security is always an issue, especially at unmanned sites – and doubly so when the area is known to have problems. As Michael Golchert explains, there are some solutions available that can make a site nearly trouble-free.

When the word came down that the eight-tower KATZ directional array was going to be moved to East St. Louis, IL, the engineers at the Clear Channel station were a bit apprehensive.

The new site was just off two major Interstate highways (I-64 & I-255) and is less than 0.5 km from a medium security Illinois State Prison. Furthermore, the area is well-known for gangs and other crime.

Security was going to be a major concern.

Once the new site was acquired, Market Engineering Manager Daryl McQuinn knew he had his work cut out for him making sure the site was to be made secure.

McQuinn’s work was made easier by his fencing contractor, who did some research on the “state-of-the-art” fencing methods. The contractor came up with a fencing fabric that has been used to secure prisons.

The fabric is a very heavy gauge metal that is so closely woven that a bolt cutter – or any other type of hand cutter – simply cannot cut the fabric. 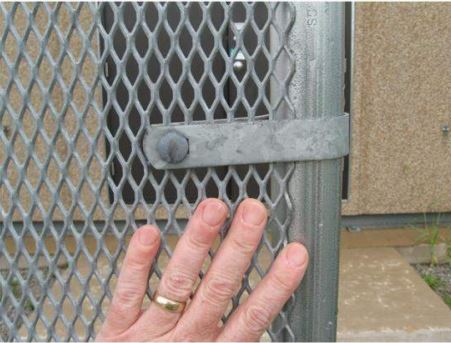 This fence is immune to hand cutters

According to the contractor, the only way to cut the fabric is with a heavy-duty grinder.

If you are considering such an approach, you will want to know the fabric used at KATZ is called AMICO Secura mesh. (The information website for the product is here.)

At KATZ, the installation included Schedule 40 posts, six strands of barbed wire, Razor Ribbon, and the fence itself.

The latch is made of a double bar, so that it fits on both sides of the gates. 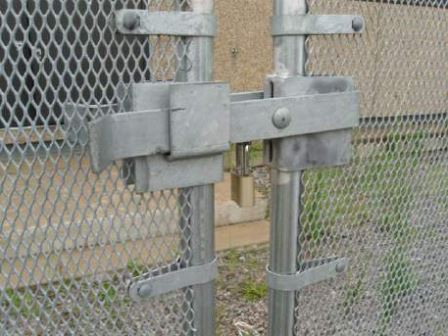 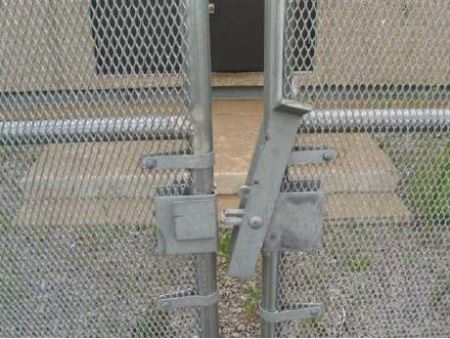 Of course, wrapping the entire transmitter building this way was not what you might consider cheap. At KATZ, the total installed cost was approximately $115 per liner foot.

However, this type of fencing fabric, in addition to the other security measures, has been able to keep the KATZ site secure.

At the same time, just putting up one of these modern-type fences will not stop the most determined thieves, especially at isolated sites.

This is especially important since the price of copper has gone so high. Copper thieves, for example, can cause well over $100,000 in damages in very short order. Insurance companies now are aware of the issue, and premiums have risen substantially in response. That means other security measures like webcams or other alarms should be both installed – and monitored regularly – as well.

Good site security does add another line to your engineering budget. But ignoring the problem and hoping nothing bad happens is not a prudent course to take.

Michael Golchert is an experienced radio engineer, specializing on AM installations. You can contact Michael at golchert@earthlink.net