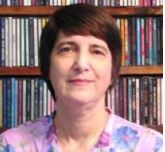 [July 2020] Upcoming is the 100th Anniversary of broadcasting – or the 104th – or the 111th – or … well, it depends upon whom you ask or what history book you read. KDKA is inevitably discussed, but were they really the first? As Donna Halper points out, getting to the truth of is getting harder the farther we go from the roots of the industry. But the truth is out there, if we do want to know.

I spent more than three decades in broadcasting before I became a professor of communication and media studies.

These days, my job is not just teaching my students about various theories; it is also teaching them critical thinking. In other words, just because they find a claim on someone’s blog or in an online publication, or on Wikipedia, that does not mean the claim is accurate.

Just Because It Is Posted…

Anyone can write a blog post, with or without facts at their disposal; and as I remind my students, anyone can edit a Wikipedia entry – from someone who is an expert in their field to someone with an axe to grind.

But in fairness, the same skeptical attitude should apply when reading claims made in a book, a newspaper or a magazine. I know from experience, that misinformation can creep into even the most reputable books.

What the Textbooks Say

Consider the multitude of History of Broadcasting textbooks that repeat the myth (and it is a myth) that KDKA in Pittsburgh was the first radio station in the United States (or, some sources insist, in the world).

Take, for example, The Broadcast Century and Beyond (5th edition, Focal Press, 2010). In this text, Robert L. Hilliard and Michael C. Keith explained why another claimant to being first, Charles “Doc” Herrold (an inventor, professor, and engineer from San Jose CA), did not actually have the first station, even though he and his wife Sybil were on the air with voice and music circa 1912.

Wrote Hilliard and Keith, “Although some historians say that Herrold’s station, ultimately called KQW, is the country’s oldest, it did not broadcast to the general public on a regular schedule; that designation is acknowledged to belong to KDKA in Pittsburgh, which began doing so more than a decade later” (p. 10).

Was KDKA The First?

Whenever I see that assertion, it makes my head hurt.

I can understand that some historians want to exclude “Doc” Herrold’s station because it operated at a college, and only a very limited number of people heard it. There is, however, evidence that the Herrold kept a regular schedule, originally broadcasting once a week on Wednesday nights, and gradually increasing the number of broadcasts. 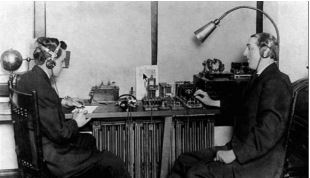 But even if we ignore Herrold’s station, it is still inaccurate to claim that no other station broadcast to a mass audience before KDKA’s famous first broadcast on November 2, 1920. In fact, from late 1919 through the summer of 1920, there were at least two well-documented examples of “commercial stations” (although this term was difficult to define in those early years – it had nothing to do with running advertisements). They did broadcast to a general audience, and kept fairly regular schedules.
We know this because the activities of these stations were thoroughly documented in local newspaper articles, and there were also reception reports from listeners. One pioneering station that preceded KDKA was 8MK, owned by the Detroit News. Today, it is known as WWJ, but as 8MK, it was on the air in late August 1920.

The new “radiophone” station (as it was then called) not only broadcast music concerts, but it also broadcast news, including Michigan election returns and, later, broadcast the presidential election results, just like KDKA did – not as KDKA, but with its original call letters 8ZZ.

It began airing once-a-week music concerts to the ships at sea in early 1916, and by the spring of 1920, it was broadcasting several times a week. 1XE/WGI is long defunct (it ran out of money and ceased broadcasting in the spring of 1925), but it was greater Boston’s first station, and the careers of many important figures in Boston radio and music were started there.

So, how did the story that KDKA was first get disseminated?

As the American Express advertising slogan says, “Ownership has its privileges,” and this was certainly true about how the story of the “first station” got told.

8MK/WWJ was owned by William E. Scripps, who for some reason, never saw any possibilities for his station beyond broadcasting to listeners in greater Detroit, and there is little evidence he promoted his station nationally.

In contrast, 1XE/WGI was owned by a young entrepreneur named Harold Power; he founded AMRAD, a company that manufactured radio receivers, but although he wanted to spread 1XE’s story, he never made enough money to promote his station effectively. 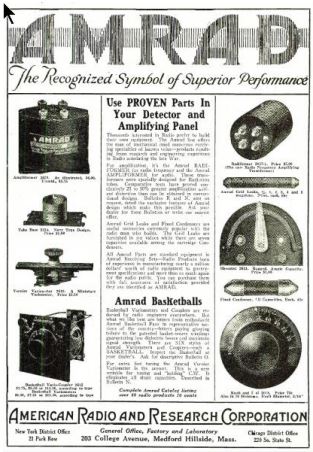 An AMRAD ad from 1922;
they were already building receivers

The Power of Publicity

On the other hand, KDKA was owned by Westinghouse, in those days a prosperous and influential manufacturing company, known for its household appliances.

The company had plenty of money for advertising and promotion, and a large publicity department. Westinghouse executives wanted to not only promote their new radio station, but to also promote their radio receivers. Hence, they made sure that newspaper and magazine editors knew all about the amazing achievements of KDKA – they not only sent out press releases, but they sent members of the Westinghouse team to go to various cities and talk about what KDKA was doing.

It is a truism that history is written by the winners, and in this case, neither 8MK nor 1XE had the money or the staff to compete with Westinghouse’s promotional strategy.

KDKA’s version of radio history was soon being quoted as fact in major newspapers, and ultimately, it appeared in one of the first broadcasting textbooks, Gleason Archer’s History of Radio to 1926.

Mr. Archer was well-known as an attorney and an educator (he founded a law school in Boston that is today known as Suffolk University), but there is little evidence that he was paying close attention to radio’s formative years. When he wrote his book in 1938, he mainly used corporate resources, including many from RCA and Westinghouse; and that may explain why he omitted or minimized the role of the smaller, non-corporate stations that were on the air in the early 1920s.

Then, subsequent histories of broadcasting quoted Archer, and the story of KDKA as the first station in the US soon became entrenched. But that does not make it true, no matter how many textbooks said so.

In the 1990s, a new generation of researchers began to examine the early years of radio, helped in large part (or occasionally misled) by the Internet as well as the availability of digitized editions of old newspapers and magazines.

These publications have made it easier to fact-check who was doing what, and to get a fuller picture of radio’s first decade.

Some researchers, myself among them, have had the opportunity to look at various rare archival documents and memorabilia from radio’s founding fathers (and mothers), and the result is a version of history that is not just the story of KDKA, but the story of numerous other stations which tried to do unique and unusual things, with varying degrees of success.

I know what some of you are thinking: well, okay, maybe KDKA was not the first station on the air, but it was the first to get a commercial license, right?

As it turns out, that too is a myth. At first, what the Department of Commerce (DOC) created came to be known as a “limited commercial license.” It indicated that the station was owned by a commercial company, such as Westinghouse, and could broadcast for payment, mostly telegraphic messages.

The first “commercial license” did not exist until Westinghouse lobbied the DOC to create it, to distinguish ham and experimental radio stations from commercial stations. It was not until mid-September 1921 that the first commercial license was issued, and it was another Westinghouse station, WBZ radio (then in Springfield MA, today in Boston) which received that first one, not KDKA.

Side-point: despite the name, this new license did not give stations permission to broadcast what we today call commercials: Herbert Hoover, later the president of the United States, but back then, the head of the DOC, stated that he was totally opposed to radio stations broadcasting advertising messages, and in radio’s early years, stations were expected to avoid airing any commercials.

By the way, those early stations operated at 360 meters (833 kHz). As part of its lobbying, Westinghouse had hoped to get authorization for one frequency to use for all their company stations, so they could more easily communicate with one another and be the same frequency in each city. Unfortunately the government decided that yes, one frequency would be fine, but that all broadcasters should share 833!”).

Please do not get me wrong: I am in no way denying that KDKA was an important station, and it absolutely did have many noteworthy achievements.

But it was neither the first station to broadcast to the general public, nor the first to keep a regular schedule, and it was not even the first to get a commercial license. If this all seems nit-picky, it is not intended to be.

But in this era of media consolidation, when historical buildings are being torn down and so much of our history has been destroyed or thrown away (or simply forgotten), I feel that it is important to give credit to all the pioneering early broadcasters, not just the ones who had a great publicity department behind them.

Author’s note: Thomas H. White’s excellent and thorough piece about the early history of 8MK/WWJ is also on The BDR. You can read it here.

Donna L. Halper, PhD is an associate professor of Communication and Media Studies at Lesley University, Cambridge MA. She is the author of six books and many articles, and a former broadcaster and radio consultant. Her website is: www.donnahalper.com