Among the most annoying times in life is when you return back to the studio (or home) and realize the remote control system is still set for “local.” Immediately ahead is anything from a half-an-hour to several hours of driving, just to push a button and leave. True, I have seen engineers who “chance it,” hoping nothing will happen before their next scheduled trip. I could never do that.

Similarly, driving out to the transmitter site – especially a distant one – just to reset a tripped breaker is not high on the list of “things I really want to do.” There is always the worry that, until I figure out what it was that caused the trip, it can (and will!) happen again … usually just after you have observed the system for a while, packed up, and headed back to the barn.

Muttering under your breath on the way back to the site is not a real solution.

Of course, radio engineers are nothing but inventive. Give an engineer a parts box and some time to think, and he will come up with something. Perhaps something like this: 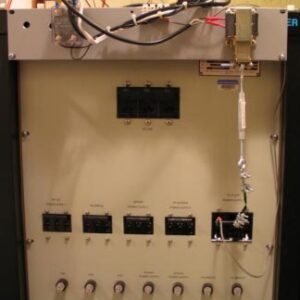 Over the years, I have seen a number of variations on this at both AM and FM stations. Here in the Southwest, for example, it was often used on older AM transmitters to recover from lightning-induced breaker trips.

Purists will instantly point out the danger of restoring high voltage without knowing why the breaker tripped in the first place. And it is true that indiscriminate use of “tricks” like this could lead to additional damage to the transmitter – or even a fire in the building. It is essential that any site where such a remote reset is done be monitored by remote control, and physically checked as soon as possible, to reduce the potential for a “melt-down.”

More importantly, the reason for the trip should be determined and the defective parts replaced. The potential for damage outweighs saving a few dollars. Any such “lash up” should be temporary.

Do you have a picture demonstrating “genius in engineering” – or something that falls just a bit short of “Rube Goldberg” standards? Please – send it on to us, so we can share the good, and the not so good!