Dave Dunsmoor submits this one… 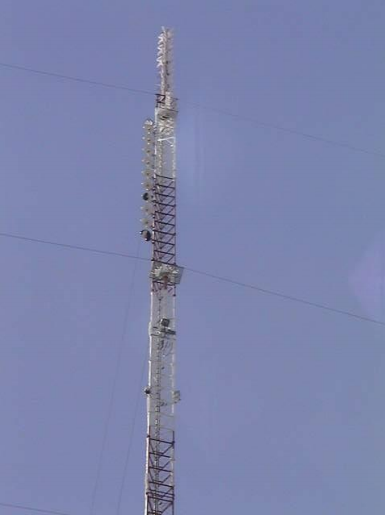 What catches your eye on this one?

There are a couple of things that might appear out of the ordinary to your eye. What grabs your attention in this picture?

While you might see a few things, there is one key point from Mr. Dunsmoor, which appears on the next page. A few others that were submitted will be added.

What caught my eye, and struck me as odd was that the top section of the tower was white, with a smaller orange band just below. It was not until I got up close that I saw that the top white was ice, and not a mis-painted tower (the top has to be orange per FAA specs).

One person noted that two of the antenna bays were not covered with ice, and wondered if there was a problem with the heaters or perhaps the bays were overheating themselves. Another person noted the ice-pack itself and the lack of ice shield (which might actually be down lower on the tower). And, it was commented that at least one of the sidelights appears to be covered by the ice, too.