Takeaways (Though not Giveaways) From the 2019 NAB 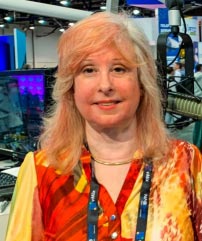 [April 2019] At an exhibition as large as NAB, everyone comes back with a different view, of that most impressed them. Sometimes the Show is just what we expected. Other times, we end up thinking more deeply as to the real state of the industry.

The highlight of this year’s NAB, as is the case with all of them, was the chance to catch up with old friends.

All were in good spirits, but as noted by engineering consultant and radio station owner David Stewart: in the past, people would be sharing details of their personal success – their new sports cars or toys. Now the symbol of satisfaction is more likely to be, ‘I’m only two years from retirement.’

Granted, those of us of a certain age tend to hang out with similar others, but even so, youth was not particularly drawn to the North Hall where the denizens of radio are found.

Overall attendance was relatively flat compared to last year (about 91,000) down a bit from a few years ago (when numbers were around 103,000) – but up quite a bit from 2009, when 82,000 attended, a predictable result of the economic downturn.

Digital and video were the big lures by far, and while things were somewhat more sedate in the North Hall, traffic was consistent, and attitudes were good – both suppliers and buyers were confident in the technical gains the digital world has brought: reliability, adaptability, increasing affordability, and the cherry on top: no need to rely upon Telco offerings and antiquated analog devices.

If there was one word to describe this year’s NAB, it would be “podcasting.”

The pesky reality that podcasting has yet to be a profitable endeavor was completely overshadowed by the irresistible promise of future riches it holds. Who could not love a concept that requires almost no capitalization to maintain a place on the same platform as the big guys?

But podcasting has two yet to be surmounted realities. One is that the whole concept eviscerates the law of supply and demand. Unlike prime real estate in the center of town, or a position on the local FM dial, or shelf space at the superstore, podcasts are not part of a relatively small, well-known universe. Actually, they are teeming in supply.

Standing out from the crowd as a provider or finding the one you want as a listener, listeners share one frustration in common: No one has ever gone to Google and searched for something they did not know existed. Currently the biggest aid for podcast growth is being tied to a well-known offline presence – and for audio there is none better known than radio.

Getting the Word Out

The second challenge podcasters face is another law that owners of inferior signals know too well: they will not listen if they cannot hear you.

Today, the information superhighway still more closely resembles a dirt road. That is changing rapidly, but for now, it is still the case that nothing is easier or more readily available than broadcasting. Radio still holds the advantage. But for how long?

Given a number of political and economic factors, seamless broadband remains elusive. There is no reason to hope those factors will change, regardless of hoopla and hype. That is great for radio. But do not celebrate. The game changer will not be through the adoption of current technology. It will be the dawn of a new paradigm that will eclipse the turf wars constantly fought by the major providers.

Maybe it will be 5G. Its promise is enticing, from lower ping times, to ubiquitous fast coverage. But as of today it is still a concept, and about the only sure bet is that widespread deployment will uncover challenges no one expects. History, not Miss Cleo’s crystal ball, forecasts that.

Summing Up The TV Side

ATSC 3.0 was predictably highlighted at this year’s NAB.

For television stations that recently spent a fortune upgrading to digital (with ATSC 1.0), the idea of spending another grand sum on the latest kid on the block is not a happy one – although the thought that adopting ATSC 3.0 may possibly prolong the edge that over-the-air broadcasters hold over the new contenders, is downright alluring.

The irony in some of the displays is how broadcasting has, perhaps unwittingly, created the need for many of the new digital bells and whistles.

Various booths and vehicles on display highlighted the advantages of the integrated dashboard. However, it seemed that the bulk of the selling points are features broadcasters have thrown away.

Who among us has not encountered unexpected conditions on the road be it weather or traffic, only to scan the dial, coming up with nary a mention. Unfortunately, only a nod to traffic occurs in short drive time reports (usually from a service, often at a distance), but a tie-up on Saturday afternoon?

Listeners formerly did not need an app to warn of impending weather. The disc jockey told them about it.

But that has not been happening for years.

What used to be part of the standard listening experience when full service stations really were chock full of service, is now a new app to ooh and ah about.

Talk about giving away your strengths on a silver platter. I shudder to mention the blank stares I got in response to questions about the role of AM radio in the new landscape. (It is all you would expect and worse. Much easier for Tesla to ignore the band then employ a filter for it.)

As the number of entertainment alternatives grew over the decades, broadcasters en masse became narrowcasters. This is not the forum for a serious discussion of how and why that happened. But boiling it down to the end result shows many players bet on the wrong horse.

To state the obvious, positioning a station as playing “your favorite songs,” is perilous at a point in time when the audience has access to streams they can personally tailor.

The programmers of satellite radio must realize a large chunk of their success is wrapped around Howard Stern – a personality available only on their platform.

But rather than develop other unique selling points unavailable anywhere else, subscribers are offered endless choices of music, talk and entertainment that can arguably be found everywhere else.

Which brings us back to the shiny new kid on the NAB block: podcasts. Exactly what will be heard on them that will entice an audience (never minding the all important question of how to alert a prospective audience that the content exists online), took a back seat to how easy it is to create them.

The attendees recognized the importance of the digital experience – all of them are undoubtedly familiar with ordering something from Amazon.

But when their purchase arrived, how many of them stopped to note the condition of the truck that brought it to their door? Podcasting is the delivery truck. Content is what is on it. That notion fell through the cracks – but that too is for another discussion.

The Spring NAB has always been about the “delivery truck.” It is, and should be, a central focus for broadcasters. Signal strength and quality is the foundation of success. Technical excellence is necessary, but not sufficient. Listeners will find compelling AM-FM content no matter where it is, but when it is on a Class C AM facility, count on a full signaled FM competitor debuting in short order to eat a peripheral player alive.

The North Hall of the NAB goes far to let us know what is available to our arsenal.

For the most part, the usual suspects were all in attendance, some with smaller booths, a few missing entirely, and others with a bigger presence, the newly combined BE/Elenos among them.

While digital advances fuel our future competition, they also underpin our current technology. And the offerings were resplendent at the NAB.

Most evident is the rise of IP connectivity. It has been about a decade since Comrex came out with its first BRIC, and the Access. Techs then wondered about it. Now they are sold on it and others like it.

Systems that replace not only the waning ISDN, but also the commonplace tele-phone hybrids, and even the call-in phone lines themselves, are available and affordable.

Systems integrating all facets of broadcasting from inserting commercials and creating logs to playing music and voice tracked files or operating as live assist, were on display from multiple providers.

Alas, one vestige of the past that was sorely missed – the free spending days of the ‘80s when hospitality suites were plentiful and giveaways rewarding, along with sturdy, long lasting bags in copious supply, looking almost like an explosion at the airport luggage carousel.

For vendors it is a matter of cost saving; for attendees, it is the downside of technology. “You want information? Here is the URL to our site.” Or maybe there is a flash drive and, as you look around, the perfected cheap paper bag that almost looks like a canvas carryall. Emphasis on “almost.” But the bags all fall apart long before a debate on that point can ensue.

In the end, our bags might not be as heavy as in previous years, but we did get a good look at where broadcasting is in 2019.

Among her many credits Rollye James worked with Claude Hall at Billboard and, with her husband, owns several broadcast stations in Globe, Arizona. You can contact Rollye at: rollye@kqss.net