Solving the “B” Battery Problem

[October 2016] Users of the venerable NemsClarke 120B field intensity meters have had a problem for a while.

The unit is long out of manufacture, and support is difficult to obtain. But the biggest issue is that the plate power supply for the unit is basically unobtanium. The 67.5 Volt “B” batteries used by the meter are just not made any more. If you are trying to keep your 120B in action, you might be interested in this adaptor made by Mike Bafaro.

If you have a Nems-Clarke 120 series Field Strength Meter, a 1950s-era tube receiver – or any other consumer equipment built with the 1.5V filament tubes and uses the old zinc carbon 67.5V “B” batteries – Bafaro Engineering has developed a replacement module that will allow you to run your vacuum tube instrument from eight “AA” batteries.

The BE675A converter is made specifically to fit into and power the plate supply of the NemsClarke 120B Field Strength Meter. The original snap connectors for the B batteries are adapted and stored to the side of the D cells that run the filaments. 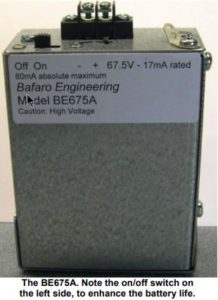 The BE675A incorporates a special magnetic design and filtering adequate specifically to prevent disturbance to the meter reading of the Nems-Clarke 120B measurements.

The eight “AA” batteries will deliver 67.5 Volts, regulated at up to 17 mA – better than the original “B” battery. The module is the same size as the original battery except for the output terminal strip on the top of the unit.

Furthermore, my converter delivers the regulated 67.5 Volts (+/- .7 Volts) until the easily available AA batteries are down to 1 Volt per cell, which is better than the original B battery – if you can find one! 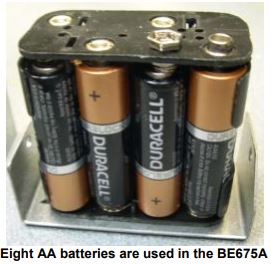 At the 67.5 Volt level, the unit delivers the regulated Voltage at the nominal current called out in the Eveready #467 specification: 17 mA. As an example, a typical Nems-Clarke 120B will draw 5 mA.

Thus the owner of the instrument can keep the meter running for about 20 hours or so of operation for about $6.

The internal 67.5 Volt boost supply is isolated from the case of the unit and will not disturb the bias divider network used to set the gain of the tubes used in the Nems-Clarke 120 series meters. The module case is automatically grounded to the meter’s case for the best EMC (Electro Magnetic Compatibility) performance. If used externally for this or other products, the module should be properly grounded. 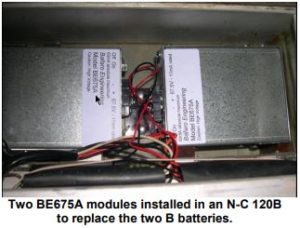 The original snap connectors for the B batteries are adapted and stored to the side of the D cells that run the filaments. But if you send a used B battery in, it will be turned into a connector such that you do not have to make any changes to the original Nems-Clarke instrument.

Because this module is made to replace the zinc carbon 67.5V “B” battery its output voltage is above the safety limit of the SELV (Safety Extra Low Voltage) Voltage rating of 60 Volts.

As such it is to be used only by those familiar with the safe handling of High Voltage devices.

After it was developed, the BE675A was tested extensively in a Nems-Clarke 120B.

The converter was tested for EMC by myself, Pete Walter (Senior RF engineer from Motorola), and Mark Mueller of Mueller Broadcast Design. We did not find any self-quieting spots in the band nor did we hear any beats or tweets with the local broadcast stations. It met Mark’s requirement that it does not affect the meter readings.

The list price for the BE675A is $79.99 which includes the first set of AA batteries. More information is here. If the customer sends two old B batteries the connecting adaptors are made at no extra charge.

Mike Bafaro is a retired electrical engineer who worked for Motorola for over 37 years. You can contact Mike at: m.bafaro@comcast.net