[May 2010] When a computer slows down or becomes balky, it is often hard to know who to call for help – each hardware and software company will point at someone else. As Dave Dunsmoor explains, System Mechanic looks “under the hood” and usually finds and solves the problem.

I was recently given the opportunity to install, use and evaluate the newest version of iolo technologies’ System Mechanic (Version 9.5.8). I have used it in the past (Version 3), and was happy with its system cleanup capabilities, so felt a review of the latest version might be useful.

Curiously, it is my impression that System Mechanic has not been as well advertised as perhaps it could be. Norton and McAfee are well-known names, but iolo is not. If it were not for the fact that I was already familiar with the name, I would have most likely missed (or skipped) the chance to evaluate it – a situation that well-deserves to be corrected.

My first impression was positive. When I opened the box, not only did I find the software, but also printed “get started” documentation – which in my book makes it much easier to install anything. I can assume that I know what has to happen or I can read the docs on the install disk, but having it right at hand is a big plus for me.

Furthermore, there was a small (4″ x 5″) notepad included. That is a really nice touch, as there is usually a need to write something down during software installs or upgrades.

Next was the revelation that this software was licensed to install on three different machines. Excellent!

Rounding out my initial observations was noticing that System Mechanic was advertised to work on Windows 2000 as well as the newer versions of Windows. This was another definite plus, as the “problem machine” I had planned for the first run was running Win2K and its condition was the result of many years of add/deleting software applications, surfing, and self-help fixing.

As I began the installation, I discovered my first – but short-lived – disappointment. During the process, I thought what I read was stating the application that was licensed only for one year and required an annual subscription. I wrote to iolo, posed my concern, and was soon assured that the application will run forever after installation, although continued updates require an annual subscription. I was OK with that explanation, and continued on with the install.

The system requirements for installation are: Windows 2000, XP, vista or 7 (and can be used with either 32 or 64 bit machines), 25 MB disk space available, 256 MB RAM and IE 6.0 or later with an Internet connection available. Well, that certainly covers every machine that I am using.

It is worth noting that from installation to operation, I found the tech support to be quick, accurate, and courteous. Usually, I got prompt email responses, but there is also a 24/7 self-help link: www.iolo.com/customercare

Immediately following installation, an update was requested, and I ran it. Unfortunately, it hung, so I exited System Mechanic and re-started. I posed the question to iolo, but in the meantime, I began running the various utilities, which found and repaired many problems.

By the third update, there was no trouble at all with the process. The updates installed and System Mechanic continued normal operation – and each update since has installed with no hitch. Since I had already installed System Mechanic on another machine (running XP), which did all the updates with no hangups at all, I figure that one of the System Mechanic utilities found and solved whatever problem was causing the hangs.

So, besides all the various cleanups, System Mechanic had already fixed a problem. That is one “thumbs up.”

System Mechanic contains quite a few useful utilities that can solve any number of problems, more than we can list here. More information is, of course, on the iolo site: www.iolo.com. But, several of the utilities really stood out in my evaluation.

As noted, I have installed and removed a great number of programs on this machine over the years. As any long-time computer user knows, this leaves a certain amount of detritus behind that uninstall features often miss. So the ability to find and remove “junk” files and registry entries is a major way that applications like System Mechanic return computers to a speedier, more reliable operation.

One of the unique, but curious (to me), tasks System Mechanic can do is to compact and defrag the registry. Initially I was reluctant to try this as I did not want to end up with a registry that I could not access or edit in the conventional ways I normally use (regedit). So I asked iolo about this.

Again an answer was quickly received, and I was assured that their compacting and defraging process would not change any access as compared to default. I also liked the fact that the registry and the hard drives can be defragged “at the next startup,” before Windows loads.

The defragmenting utility also indicates percentage fragmentation and the cluster address where the data is being moved. I think the graphic is a little more interesting to watch than the windows version (it resembles a disk), telling essentially the same story – but with a bit more information. While I cannot specifically use this information, I like meters and lights on equipment so this appealed to me.

In addition to registry defrag and hard drive defrag, System Mechanic offers an option to defrag the RAM. This is something new to me, and might just be an answer to some “memory leak” problems.

Other utilities include a Drive Medic, which fixes hard drive errors, a file recovery utility that can seek out and find even deleted files and pictures, the “junk file” removal (in three to four minutes, it ran through my three drives of over a terabyte), a Startup Optimizer to select the programs loaded at startup, a System Guard to prevent unauthorized system changes, and a utility I really like: a duplicate file finder/remover.

Yes, like many, I am a digital “picture packrat” with copies of shots taken on the road and with the grandkids. As I was writing this, the duplicate file finder delivered a list of 681 MB of duplicates on this one machine – perhaps not a big percentage of the total file size, but good for me to sort through as I decided which files to keep and archive.

What is especially useful is that any or all of the many utilities can be run either manually, or automated in the background, and you can specify date/times/conditions for this. I like the option of being able to run any of the included utilities myself – or bundled as an automated background function.

System Mechanic provides a history report, which gives you the option to roll-back any changes you have allowed it to make if problems crop up afterward. I have had no cause to do this, so I have to surmise that it does its job well, and not overly zealous.

Another positive item is that all the utilities offer a “more info” link, which give brief, but useful information about what it is about to do (if you care to know). This at least gave me some hints about whether I wanted to continue with a particular task or not.

In addition to the more information links, there are many links to video tutorials which I found to be a very nice touch. Some folks might need them, some not, but this is a potentially useful resource, so a user can watch and see how a utility works before launching it. 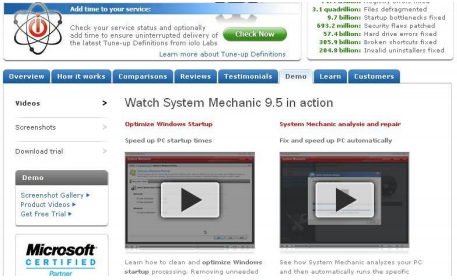 One tool I would have liked to have included in the package would be some type of benchmarking tool, a report that would display the changes in startup time, disk access time, memory usage and so on – providing some true “go/no-go” test results, instead of me “feeling” that things are faster.

That said, while I did not use a stopwatch, I do see a definite improvement in startup/shutdown times, and I believe that web access has improved as well.

One thing that I found to be a bit odd was the fact that System Mechanic never did discover my Zone Alarm firewall as being present. Regardless of how I configured things, it always came up empty when looking for a firewall.

However, the positive here might be that I was able to disable that alert, so that it at least did not continue to nag me about the “fact” that I do not apparently have a firewall enabled. I suspect that System Mechanic was looking specifically for the Windows firewall (which I have disabled as long as I am utilizing ZA).

System Mechanic finally allowed me to regain most of my aging machine’s original performance. I am a tinkerer, and explorer. I try to be cautious about my software additions and subtractions, and am maybe overly cautious about my web browsing, but even so, many years on the last installation of Windows had clearly slowed it significantly.

I knew that a buying new hard drive and/or making a clean install of Win2K (or perhaps even XP) would restore the machine to its original performance (I also suspected that doubling the RAM might help some). However, installation and use of System Mechanic has precluded any immediate necessity of any of those options.

So my final assessment is that System Mechanic receives a positive “thumbs up.”

Dave Dunsmoor is an FAA technician in Minot, ND, who does contract engineering for radio stations. Contact Dave at mrfixit@min.midco.net