[February 2016] The FCC is mandating that Public Information File materials be posted on the FCC web site, with the largest stations first up. As the process rolls out, no doubt there will be a lot of questions concerning the items stations should be posting. Among these materials are three of the more difficult items to handle correctly. Ken Benner comments:

Over the last couple of decades, Public Inspection File violations have served to generate substantial funding for the U.S. Treasury with fines, fees, forfeitures, and legal fees.

If you follow the FCC’s Media Bureau and Enforcement Bureau notices, it is clear that the EEO, Political, and Issues and Programs folders are the three where the contents and instructions are most likely misunderstood to by licensees. Because they cause so many problems, I refer to these as The Three PF Gremlins.

The Most Annoying Gremlin

In this article, we would like to address the most likely misunderstood folder, the one containing the Issues and Programs list. This is the one that often brings fines of $10-12k, per station.

Defined in Section 73.3526 of the FCC’s Rules (73.3527 for the non-commercial stations), the primary purpose of this folder is to help you prepare a means of defense should your station’s license be challenged at renewal.

It really is a smart move to keep your Public Inspection File up-to-date. That is because, at any time, a complaint could be lodged against your station from a competitor, a disgruntled employee, or by someone seeking to take your license by claiming he/she will better serve your community of license in the “public interest, convenience, and necessity” (often called PICAN) – the same criteria that was used to consider your original license application and its subsequent renewals.

What Belongs in There

The Issues and Programs file goes a long way to demonstrate the degree to which you have served your community of license. 2 Each file item contains the various issues, and the programs related to the issues, listed with the:

For those of you who have suffered through one of my ABIP (Alternate Broadcast Inspection Program) inspections, you will likely recall my “classic example” to include:

The Issues and Programs list must be in the local Public Inspection File (or now, for those stations required, on-line)by the 10th day of each quarter, i.e. January 10th, April 10th, July 10th , and October 10th .

Furthermore, this material is to be retained until the license is renewed. After renewal, it may be discarded, with a new file created for license renewal next time around.

My suggestion is to document one issue and its corresponding program segment each week, place the information in the Issues and Programs folder, and you have done your job.

Hundreds of stations use a form I created over 15 years ago (See Appendix A, below) to meet this requirement with 12 numbered lines separated with a column for each of the five items designated above.

Each of those lines represents the chosen item selected for one week of each quarter. Thus, only two double-sided sheets will cover a one year’s required Issues and Programs filing requirement.

While on the subject of Issues and Programs I would like to take a moment and share some of the mistakes I have encountered for this subject during thousands of ABIP inspections.

One television station logged every item on every newscast employing a fulltime staffer to address this single Public Inspection File requirement. Four years into the midpoint of the eight-year license cycle, they had compiled over 1000 pages because the station’s legal consul had suggested “the more the better.”

Actually, this was gross overkill.

On the other hand, another interesting story involved an unattended station entirely computer-controlled and satellite programmed 24/7. It was fascinating how they met the Issues and Programs requirement.

A couple of high school sophomores were hired to take their cassette tape recorder each week to interview, for example, the local librarian to discuss her newest recommended books, the local dog-catcher to discuss his kennel population, the city mayor to discuss the month’s council meeting, etc.

The kids would also duplicate their log entry in the station log maintained at a local library where the station’s Public Inspection File was maintained for the sake of required access for the public and the FCC inspector.

How is that for minimizing the cost of labor, unemployment taxes, matching 401k costs, healthcare benefits, etc. etc. as the licensee smiled all the way to the bank?

If you have any further questions about the Issues and Programs file please call my long-time friends at the FCC in Washington.

Be sure to say “hello” to them from Ken Benner. Seriously, they are both wonderful, professionally dedicated FCC staffers.

Ken Benner, CBRE, NCE is not a lawyer and does not hold the above material to be considered legal advice, but rather a good faith explanatory effort based upon his 20 years of dedicated service as an ABIP inspector. You can contact Ken directly at: bennerassociates@me.com

Over the years, as I visited hundreds of stations, making thousands of inspections, I have often been asked for ways to simplify Public Inspection File requirements, but in a way the FCC approves. The following form has been used many, many times, with no complaints from FCC Inspectors or all. 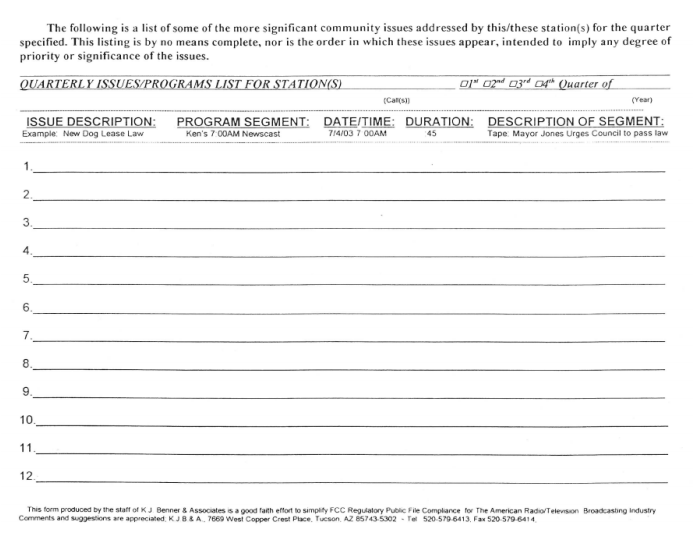