[September 2010] Most of the time today, setting up for a remote is pretty quick. With the integrated remote origination units available, talent can drive out, plug in, and be on the air virtually instantly. But it was not always so. In the “Good Old Days,” setting up for a remote might require weeks of preparation and a whole team of people. Here is a look at how a pioneer in Texas changed things.

Remote broadcasts (“remotes” – or, as they say in England, Outside Broadcasts (OBs)) are an opportunity for a station to go out into the community and meet the audience, report live from a news or sporting event, or promote an advertiser in a way that used to create real excitement.

In the early days of broadcasting, most programs featured live performers as, among other things, the record industry and unions did not like the idea of their property being broadcast. Stations did have studio orchestras, and they invited musicians and speakers – the famous and not so famous – to their studios to broadcast. But although some stations like (the Iowa stations) built large auditoriums to host visitors to their stores – and live broadcasts – for most stations space was usually limited, and getting talent and audiences to the studio was not always easy.

To accommodate some stars and/or advertisers, stations began to bring in audio from hotel ballrooms, theaters, and other locations. If the station was located in the same building as a hotel, that made things relatively easy – just string wire from floor to floor and go on the air. If the site was away from the station, the most common way was to arrange for a special telephone circuit.

By the mid-1920s, stations from coast-to-coast had musical, dramatic, and comedy programs originating from various places. One problem: phone lines were time consuming to arrange, expensive to set up, and cost a lot to run (until 1955, AT&T charged $5/hour/mile), especially for one-time events. It was so expensive that one station owner, Harry Read, figured out a scheme to string wire through the sewer system in Portland to avoid the high costs of telephone lines.

At first, station operators sought to cover the costs with advertising but eventually found an even better solution: “networks” of stations which would carry a program, and advertisers who wanted to reach a regional or national audience. This encouraged more and more live (and later recorded) programming from places where it as easy to assemble an audience.

Breaking Away From Wire

Of course, in many cases, especially for news events and last minute appearances, there was no time to arrange for a telephone loop. Some remotes were accomplished with the old QKT boxes and hooking them to an actual POTS line (and hoping there were no “beeps” every 15 seconds). But, at other times, the event site might be somewhere where no telephones existed.

One solution that occurred to engineers was a wireless link from a remote site to the studio. In the Dallas-Ft. Worth area, the first station to have a wireless broadcast unit was KFJZ. Invented by Truett Kimzey, the portable relay station was first used first on April 28, 1937 for live coverage of the Texas Open Golf Tournament from Colonial Hills Golf Club in Fort Worth, Texas. 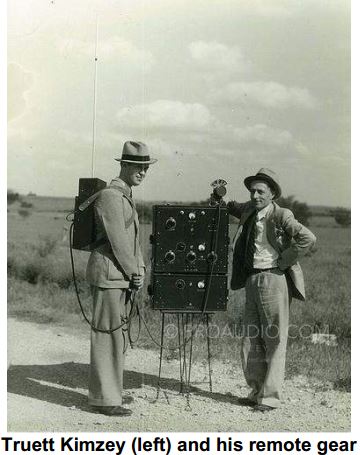 According to reports, the KFJZ relay station successfully brought the sounds and results of the tournament to the entire Dallas-Ft Worth area.

As can be seen, this remote transmitter was portable only with a decent size vehicle and a couple of strong backs. One thing it was not was small and light. But once it was set up though, the remote site was connected immediately with the studio, not even tying up one of the few phone lines available.

Over the years, the sort of system Kimzey designed and pioneered underwent continued improvements both in terms of size and audio fidelity. Another engineer, also in Texas, became so adept at designing and manufacturing these wireless RPU systems that they became known by his name – selling so many that broadcasters simply began tell their staff to “take the Marti out” to the remote site. Crouse-Kimzey was to become one of the first Marti dealers.

Of course, with cellular and Internet access, stations have many more options for getting remote event broadcasts back to the studio. A typical remote now can be transmitted to the studio with a product that weighs just ounces, and might even be carried in a pocket. What a change in size from the old days! 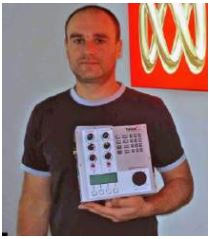 Instead of a pile of gear that had to be manhandled by several employees, some of the more popular codecs can be held in one hand.

Want something even smaller? Tieline released an iPhone application this year that turns your iPhone into a 15 kHz field codec or a 20 kHz audio recorder and either can connect live to an IP codec at the station or send a recorded file via FTP. Comrex did something similar with the Android OS. 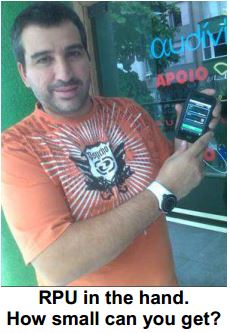 The industry certainly has benefitted from the invention of and improvements to RPU gear developed over the years. Especially we can be thankful for the engineers who saw a need and set to work to produce things to which we often do not even give a second thought as we rush to get things accomplished.

Truett Kimzey was a pioneering broadcast engineer in the early days of radio. He engineered the original Texas State Network, the very first of more than 30 state networks now operating in the U.S., and built and maintained radio stations all over Texas and beyond. As an outgrowth, Truett’s son John Paul Kimzey and John R. “Buddy” Crouse founded the Crouse-Kimzey Company (known today as ProAudio.com) to serve his broadcaster clients in an expanded way.

At first, the company concentrated on providing engineering services on a contract basis, such as performing radio stations’ annual audio Equipment Performance Measurements and other FCC mandated tests, and fulfilling the resulting equipment needs. For example, as Buddy engineered field and studio solutions, he designed custom consoles for the studios he built, some of which are still on air today. 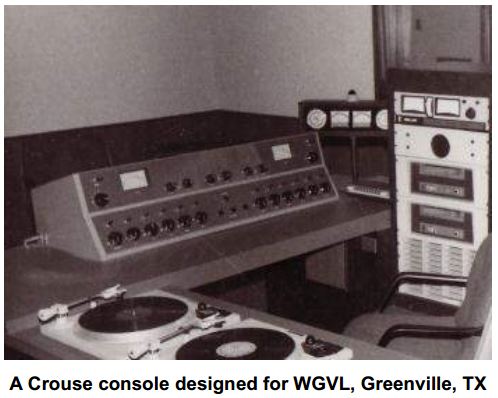 Buddy also designed and built other equipment for his clients. It was all very well-made because of his engineering experience – Buddy knew how to build gear because he had been fixing it for so long. As word of the consoles and other gear spread, and Crouse-Kimzey Company went on to establish a reputation as a premier source for everything “from the microphone to the transmitter.”

Some stations, including WBAP bought several consoles, for example, so they would have a backup in case of failure. However, the Crouse console never failed, and the backup was never used.

Improving Just a Bit Too Far?

Sometimes, though, the drive to build the best products can be just a bit too intense for your own good.

Crouse kept finding more ideas to develop, and once built a compact, metal-cased, four-input remote mixer that was flat and would fit in a case that was nearly indestructible. John Paul wanted to go in to mass production with this model, and they did build four or five units. Unfortunately Buddy kept “improving” the design with each successive unit. John Paul could never get him to standardize, so the product died.

Although Crouse eventually stopped building consoles and other gear, it was all very reliable and, as noted, some consoles still are in use today. The folks at ProAudio.com already have posted a number of pictures showing how stations looked in Crouse’ day; from time to time more pictures are added, along with some interesting history. You can find them at www.proaudio.com/history.php

Our thanks to ProAudio.com and Stephanie Glockzin for the pictures and background on Kimsey and Crouse.