Radio Automation On A Budget 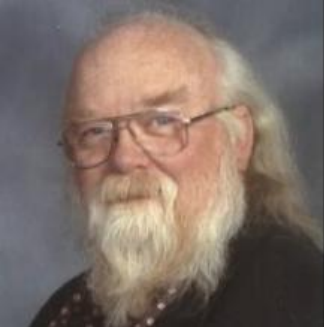 [December 2011] No one can deny that the sound of radio has been changed dramatically by computers. In the Control Room, talent has been given resources to put their full attention toward content, instead of being consumed by the mechanics of cueing each program element individually. Prices and features vary greatly. Tom Spencer reports on a surprisingly affordable option.

Let us start by assuming you have finally convinced management to bite the bullet and replace that ancient computer audio system that sometimes plays your music and spots – and sometimes crashes just as you go into a stop set. What is the smart move?

As you may have heard, “One size does not fit all.” It turns out that this is quite true with radio automation. There is a wide range of good systems out there that manage music and spots on hard drive. But what sets them apart starts with the feature set provided by each one, the level customer support, and, of course, the cost of acquisition and maintenance.

Station Playlist? Yes, indeed. In my experience SPL will do just about anything the “Big Boys” will do – and at a fraction of the cost. 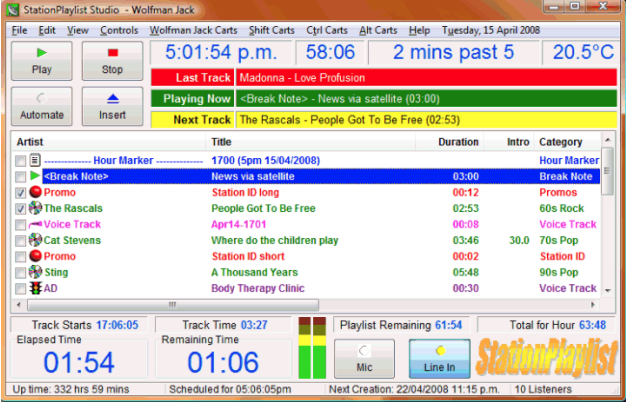 Voice track recording? Check. External event controls? Check. External command inputs? Check. DMCA restriction enforcement for stations that stream? Check. How about being interactive? Check. SPL can and does take requests, completely unattended if desired. Plus it has all the usual automation system functions, like time and temperature announcements, fixed image elements, and handling commercials.

SPL will interface with just about any traffic system that has a standard ASCII file as its spot/log output. Three traffic systems are known to do complete handshakes with SPL: Natural Log, Traffic Light, and Radio Traffic, Dave Scott’s new product. If there is any problem in mating systems, Ross Levis, the developer of SPL, will work with your station and/or traffic software provider to get your system talking to SPL, and vice versa.

Hardware Not a Problem

A key to the modest cost is that SPL has no proprietary, or even exotic, hardware requirements. Any desktop or laptop running Windows can run SPL right out of the box, even as far back as Windows 2000 Pro, right up through Windows 7.

It does works better on the older machines if the two functional segments of SPL – Studio (the playout controller and audio engine) and Creator (the playlist generator and importer) – are on separate machines, but they will co-habit on any Windows box with few problems. Later computers with faster processors and more memory will ordinarily perform flawlessly, avoiding the potential for buffer under-runs when a processor is getting overworked.

In fact, as I write this, I have SPL Studio running along with the stream encoder (Oddcast, customized for SPL) and not one, but two stream server programs: StreamerP2P, a peer-topeer system (think Bit-Torrent), and Icecast2.

Together they generate three streams (a total of five streams are possible, altogether) without a glitch. Granted, my computer is an Athlon running at almost 2 GHz, and there is 1.2 GB of memory installed, but the various programs are all happy and play together well.

The closest things to “exotic hardware” might be the power supply for the computer (650 Watt server supply) and the soundcard (which I got used on eBay) with balanced ins and outs. My intent was to be able to interface directly with normal broadcast equipment. This particular soundcard does that (a DARLA24 from ECHO Audio), even to having a +4 dBm output level.

Quick to Setup, Easy to Upgrade

I first started using SPL as a minimal system – the basic Creator Lite with no add-ons and no Studio module. With that, I managed to replicate the functional equivalent of an IGM 300 system.

Once I decided to take the plunge, it took me no time at all to get everything possible out of both Creator Pro and Studio Pro. The setup is pretty simple if you have ever programmed a tape-andcart system. And if there ever is something you cannot get figured out, there is plenty of support; more on that in a moment.

As an example, let us take a look at a fairly simple station setup, just to show how easy it really is. If you have downloaded the demo, open the SPL Creator. You will see the splash screen come up, and then the Options tab, which is the default opening screen. 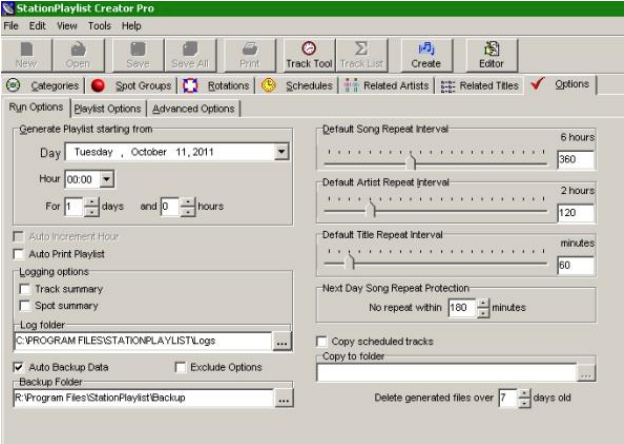 SPL starts out running the same basic schedule every day, but can support as many schedules as needed in the Pro version.

A quick stop in “Categories” will allow you to set up the music library and assign directories; the same goes for “Spot Groups,” for assigning program elements and commercials.

Once you assign those directories, SPL looks for content, automatically adding them to the database, making for minimal manual entry. Just click on “Save All” in the top tool bar, then right-click the “file” menu (the Windows border area, upper left corner), and select “Rescan All.”

Bring on the Program Director

Now the fun begins! Once you decide if your station will use the same basic “clock” all day or vary programming for the different dayparts, open the Rotations tab and click “New.” 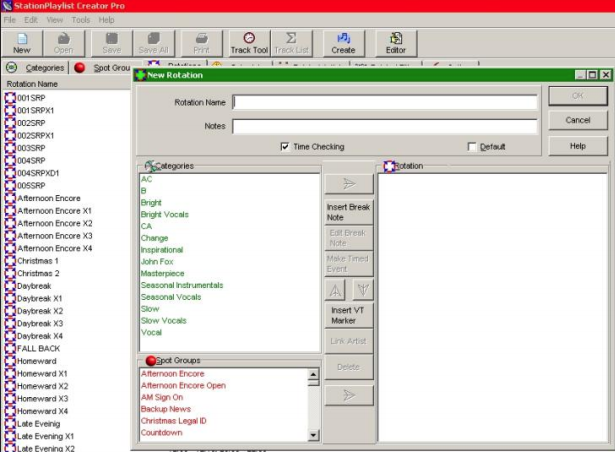 First, select the elements (song category, for example), and add it to the rotation by either double-clicking or using the arrow icon.

Then you add categories until the time display shows you have added about enough to reach your break time. In this case, we will grab eight or nine minutes of content, then select a spot or three from the Spot Group.

Oh, wait! We need to pay the bills. Recall that SPL will interface with any traffic system that has a standard ASCII output? All it takes is to insert a “Break Note” so Creator will know where the commercial is supposed to go and then, using the Traffic Importer, it will actually insert the commercials for you.

The Break Note dialog is the real power behind the SPL system. The Break Notes are the “system controls” if you will.

Here, almost every parameter can be changed “on the fly,” as it supports the various on-air elements. There are two ways to make sure SPL runs on time: one is to use Timed Events; the other is to use the Top of The Hour (TOH) as a reset point. The complete story of SPL’s flexibility is beyond the scope of this article, but the “Help” files are pretty comprehensive in their description of what to do to get almost any function you might desire.

Here is a schedule already filled out, so you can get an idea of just how flexible SPL really can be.

External connections are available to control the SPL as well as firing off external events. 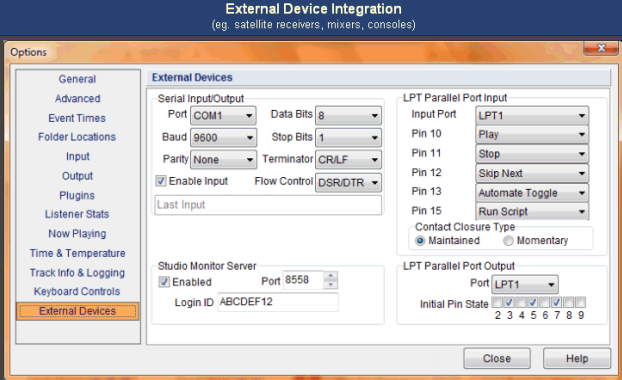 SPL handles incoming and outgoing closuresRight now, I am beta testing the SPL Version 5, which has several refinements – and is due out sometime this month. But either way, as you have seen, the setup is straightforward, the defaults will suffice for most users, and, again, the help file is pretty comprehensive.

For the money – or even for as much as ten times the money – Station Playlist is much more than you might think. It is not “just a toy,” nor “just for Internet ‘stations.” In fact, several standard broadcast stations, both here in the US and around the world, are using SPL, and no one listening can tell it.

For example, if you want the time and temperature files, plus a couple of extras (the song requester script and – get this – a tone detector plugin, so your system can respond to subaudible tones with no additional hardware), relax – it is included in the full bundle. Furthermore, SPL has available from third party providers a comprehensive set of scripts for the more popular screen reader software – so even visually impaired DJs can use SPL every bit as well as normally-sighted folks.

There is plenty of support, including an online support group of users who have probably made SPL do things of which Ross has not yet dreamed. And then there is the fact that Ross himself is in New Zealand – so, your 3 AM email to support will probably get answered within minutes.

Finally, when all else fails, like it says: “Read the instructions.” Both Creator and Studio have rather extensive help files, with examples in many cases of how to operate the many functions.

Laughing All the Way to the Bank

Since there are no special hardware requirements, SPL can be purchased as a full-blown system, with all the bells and whistles included, for under US$400.

Options and prices range from the very basic Creator Light at $49 up to the “Super-Pro Bundle,” which is everything (including the kitchen sink, I believe) for $559. All purchases include the first year of support, and upgrades. After the first year, the annual support is only $49, which entitles the user/station to any and all upgrades, as well as bug fixes (and yes, there have been a few bugs found from time to time) and interim enhancements.

There is a 30-day SPL free trial, which is a fully functional clone of the Pro bundle. The Studio demo will stop play after six hours of continuous operation, but it can be restarted.

Finally, while I am a very satisfied customer, I am not the only one by a long shot.

Some comments from other users are found at: http://www.stationplaylist.com/testimonials.html

For more information, or to purchase Station Playlist, jump over to: http://www.stationplaylist.com/index.html

… and please be sure to tell Ross I sent you!

Tom Spencer is a semi-retired radio jack-of-alltrades who also drives a school bus to keep food on the table. He currently presides over four Part 15 stations in Indianapolis, IN. His email is: radiofreetom@gmail.com