Public Files Need to Be Public

[August 2014] Most stations report they rarely, if ever, have anyone come in and ask to see the Public Information File. That does not mean you can get sloppy about what is in it – nor planning for public access.

More than a few stations have received Notices of Violation from the FCC, as well as fines for not having a complete Public Inspection File. Such citations are especially “easy pickings” for an inspector looking to cite violations is the Issues and Programs report, due within 10 days of the beginning of each calendar quarter. They look for this. Not having it in the right place is just asking for a fine.

But the FCC dispenses its bigger fines and approbation for stations where the public – and often the inspectors – find they cannot access the Public Inspection File.

But the basic requirement is that the public has access during business hours.

Here is an example, currently on YouTube – a video of how not to comply with the FCC. 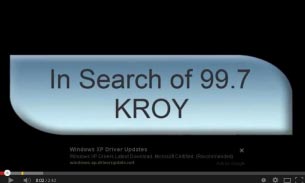 According to reports, the FCC Houston Office is currently looking into this situation. If it is as the video presents it, you will agree that a fine is quite likely to be issued.

If you take a moment and search the BDR Enforcement Watch page, you can find several fines issued where the FCC tried to check the Public Inspection File, but could not find anyone home or, in at least one case, could not even find the station!

What else will bring down the ire of the FCC?

When a member of the public shows up at the Main Studio or other designated location, they are to be admitted without delay.

As you can imagine, the FCC and its inspectors are not amused when they discover the Public Inspection File is definitely not public. Locked fences, doors, and empty buildings will result in fines.

KCET in Los Angeles received a Notice of Apparently Liability for Forfeiture for $10,000 because someone decided on a policy to demand the public make an advance appointment to visit the Public Inspection File.

Now, suppose there is some sort of a security issue and the station installs fencing and gating to keep vandals out? Perhaps something like this? 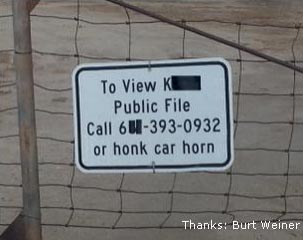 Judging by the FCC’s response to WPHA’s Station Manager, who first left the agents standing at the gate for 10 minutes, then left and told them to return another day, they were not amused.

One might surmise that a pedestrian would be unlikely to have a car horn to honk. And, even today, not all have cell phones to call. Even if they did, the FCC expects them to be admitted “without delay.” So, in the end, this sign might or might not pass the FCC’s muster.

And another thing: you cannot force a member of the public to identify themselves nor their affiliation, fill in forms detailing their purpose, or explain what they are looking for in the files.

Yes, it can take some time to put the Public Inspection File in order and to ensure the Main Studio is open during business hours, but it will prevent major expenses should the FCC come calling.

Even if no one ever does come.