103,012 people made it to NAB this spring, according to the official count, wandering over the more than one million square feet of booths.

Even though some fairly famous companies sent few – or no – representatives, it was evident from talking to the manufacturers that many were pleased with the turnout and contracts signed on the floor. Several called it their “best in years” or “best ever.” That in the face of the large move of many radio companies to the North Hall, with more than a few staying in the Central Hall.

This was my 39th NAB, starting in 1977. Looking around, it is obvious how the Show – and the Las Vegas Convention Center – have grown. Reports from the show floor indicated that the streaming and drone areas were packed.

My personal goal this year was to be able to see most of the Radio floor, and the “outliers” in the Central Hall. For the most part, I did better than in recent years, and got to see quite a few friends.

At the same time, the losses of some broadcasters in the past year were noticed – how could you not notice Dave Hultsman missing from the floor? And Paul Schaefer and Bruce Robertson were among those that passed away as the show began.

It did take a little more time than expected to get over to the Nautel Users Group (NUG) gathering at the Flamingo. For a long-running meeting that lost its venue, the turnout was impressive, with some 350 attendees catching up on Nautel’s improvements and plans. 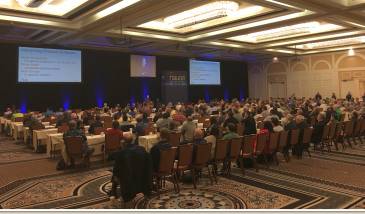 Nautel brought some new transmitters to the show this year, and have a new initiative with Omnia to provide high-quality MPX over a 320kbps IP connection. Nautel also has updated much of their firmware/software offerings – some as a reaction to the increased level of hacking this past year, including the furry animal podcast invasion of a Colorado station for some 90 minutes. Jeff Welton stunned many by noting that in less than 10 minutes, we was able to locate over 5000 pieces of broadcast gear open on the Internet

During the program, it was emphasized that every station should immediately change any default username and password for basic protection.

As the discussion enlarged at lunch, it was clear a major educational work was needed, especially for those who have limited IT training and experience. The BDR will do its share, too, in coming months.

But that was not all for this year’s Sunday. In fact, Sunday is getting packed with more and more activities.

After lunch with Nautel, a quick run over to the show floor brought me to Inovonics, where it was clear they worked overtime to develop new products; it was literally impossible to show all the new items in one or two pictures. Jim Wood and Ben Barber brought new modulation monitors for AM, FM, and streaming, a couple of new INOmini products, and more. 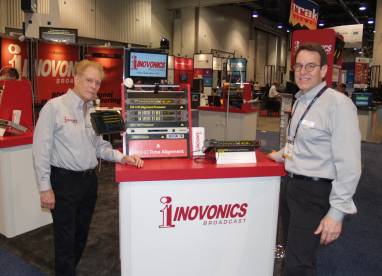 At the other end of the program chain, so to speak, was LAWO’s new virtual radio mixer, the R3LAY, which Clark Novak was rather pleased to show it off. 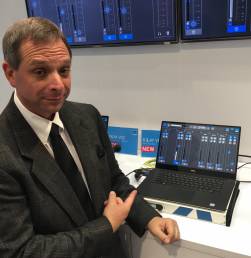 From that quick preview, it was over to the GatesAir news conference and reception, where their new models were discussed, including the Flexiva LX low power options.

Then it was on to the ShowStoppers display, where there were some interesting items from the computer companies. HP, for example, displayed a new “all-in-one” workstation based on the Xeon CPU.

The insides of the new HP Z1 workstation

A Xeon laptop model was also shown. At the other end of the floor, Dell as also showing Zeon-based workstations and laptops, as the next generation of computers that claim to handle anything in a broadcast station on a reliable basis. 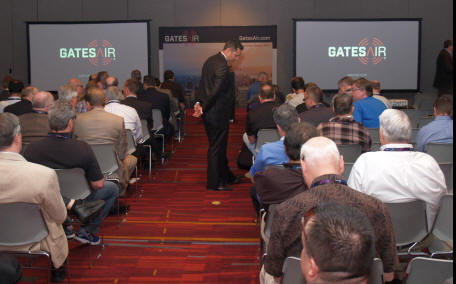 Sunday also was when SCMS surprised Bob Cauthen with a party to celebrate his 40th anniver-sary as a broadcast rep firm.

Monday is a good day to get an overview of everything, and for me to get ready for the Annual Lunch Gathering – this year the 24th in a row. Traffic seemed to come in waves, both inside and out (A lot of places stuck up $30 parking signs, although there were a few ways to deal with it), but Monday was very good for companies to do business, so we stayed on the periphery.

In the afternoon, the Broadcast Warning Working Group (BWWG) met with members of the National Weather Service in an effort to communicate broadcasters’ concerns. The NWS representatives did listen and the discussion of how they can meet their required function while avoiding “message flooding” on broadcasters seemed positive and a real search for ways for the EAS community to draw together in a collaborative way.

Tuesday found me back at the Westgate Hotel Buffet to welcome some 65 or so lunch gatherers. It a surprise, this year the hotel seemed to be happy we came and did everything they could to make us comfortable, even bringing in more tables as we filled the back room, which mercifully had no music playing at all!

This was a good year for those attending. In addition to the goodies I brought, Comrex sent over a pile of “NAB Survival Kits,” which were popular. Kevin Kidd brought some pens and some nice backup battery packs – among the few I have seen with clips to make it easy to carry in your pocket or on your belt.

But the sponsors and friends of the Lunch really came through with even more goodies to give away. Orban sent not one, but two, copies of their PCn-1600 audio processor, and the Telos Alliance sent a copy of their Zip2Stream encoder.

Added to that was the new HLS Streaming Encoder from StreamS and Inovonics offered any one of their INOmini units to the winner. There was also a $100 Visa Gift Card and piles of pens from the good folks at ESE.

Back to the Floor

Among the stories on Wednesday, The FCC Commissioners and staffers on hand made several announcements regarding broadcast, with many anxious to learn more about AM Improvement.

Comments came fast as well from those companies wanting the FCC to actually enforce the Part 15 and Part 18 rules where signal degradation to AM continues to grow. Others were wishing continued nighttime protection out to 750 miles (although very few, if any, “clear channel” stations actually program to or sell time out of market but still protection quite useful for EAS, especially when power goes out in a storm and the Internet and cellular die).

A few commented that the NAB plans to put the Radio floor in the “West Hall” in future – a possibility enhanced by seeing new paint on the old Riviera Hotel, now owned by the LVCC. On the other hand, next year should be very similar to this one, in terms of booth locations.
Hope you found this look to be enjoyable – and selfie-free – reading! 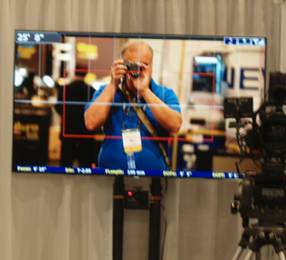