Modulation Monitoring and the RF Chain

[January 2016] At one time, modulation monitors displayed just enough to determine if a station met FCC Rules regarding modulation and signal to noise. Today’s software driven monitors can tell you a whole lot more about your RF chain, including accurate measurement of HD power and how it fits into the compliance mask. Mark Grant explains.

However, with each approved power level increase (-20 dB to -14 dB, and subsequently, -10 dB), the need to effectively measure HD Radio power levels for compliance is further magnified. The FCC mandates defined ratio between the analog FM signal power and the HD Radio carrier sidebands.

Measurement of the power ratio is performed using a spectrum analyzer to characterize the power vs frequency relationship of the hybrid RF signal. In addition, the FCC and NRSC have specified an RF frequency mask for RF emission compliance. (For a fuller discussion of the measurement techniques, RF mask compliance and HD carrier sideband power, refer to NRSC-G201-A and G202 documents.)

In special circumstances where increasing HD sideband power may cause unacceptable interference, the power may be distributed asymmetrically.

Because of the many possibilities of how carriers can now broadcast, it is more necessary than ever to better define measurement strategies to verify that levels are correct and unchanging.

The approach to accurate measurements will be somewhat different depending on how your signals combine in the RF system.

High-level combined systems feature two transmitters. There are variations to high-level combining – one delivers HD Radio and analog signals from each transmitter – but the traditional approach utilizes separate analog and HD Radio transmitters, each broadcasting separate carriers. The combining of the signals takes place later in the RF process, but the HD and analog signals come together prior to reaching the antenna.

Space-combined, or antenna-combined systems, represent the greatest challenge. Like high-level combining, this approach uses separate analog and HD transmitters. The difference is that the paths run entirely separate through to the antenna. Because these signals are not combined prior to the antenna input, the only means of attaining an accurate power measurement is off the air.

Traditionally, broadcasters have required a dedicated spectrum analyzer for accurate mask compliance measurements. These have gradually come down in price in recent years, but can still be an uncomfortable expense for most radio stations.

In contrast, the modern modulation monitor has the ability to greatly simplify measurements across all these options, particularly in the area of antenna-combined systems. However, to cover all possible HD implementations, the measurement device must have two internally combined high level RF inputs and/or a separate antenna input.

The ability to measure spectral mask in the same workflow provides an additional benefit. The spectral mask laid atop the RF spectrum ultimately determines if the station is in FCC compliance. That mask changes based on the broadcaster’s upper and lower sideband power.

In the case of Belar, we have integrated software that continuously measures the analog, upper HD sideband and lower HD sideband power. Using these measurements, we calculate the ratio between analog and HD power, and subsequently display it in real-time.

Modulation monitors with an adjustable mask, like the Belar FMHD-1, can address mask differences on asymmetrical sidebands without requiring an external analyzer for spectrum measurement. The mask can be adjusted to run higher on one side and lower on the other, and be set in alignment with the transmitting power.

By laying the mask atop the spectrum inside the mod monitor, the broadcaster can visually confirm that the station is both in mask compliance and transmitting the appropriate sideband power.

Broadcasters interested in measurement of both power ratios and mask compliance within the modulation monitor should first confirm that the unit will provide the actual measurements. In addition, since the most accurate measurements are attained at the transmitter site, having a monitor with a remote interface is to the broadcaster’s benefit. 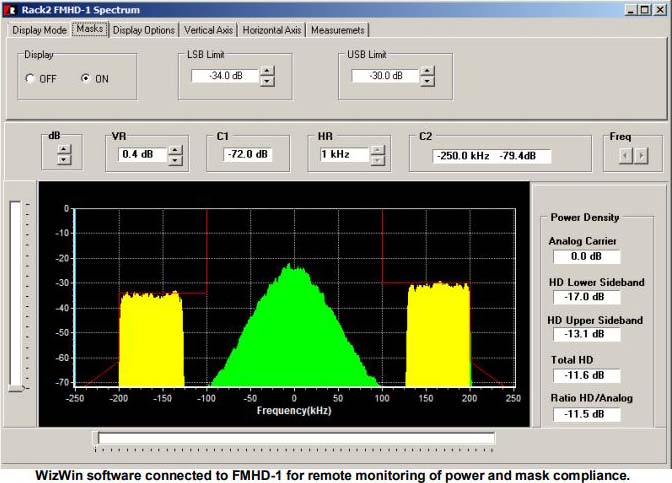 Moving forward, enhanced IP networking within the RF chain should open additional doors to further advances. One possibility we envision is feeding both power and mask measurements back to the exciter – similar to Belar’s HD diversity delay measurement process – so that the exciter comprehends what is happening in the field. This is just one possibility on the horizon to emphasize how the modulation monitor can bring greater efficiency to problem solving in the RF chain.