Improving Two Experiences at Once Through HD Diversity Delay

[March 2019] Probably one of the most frustrating aspects for engineers of HD Radio stations is keeping the time alignment stable when receivers blend from digital to analog or back to digital. GatesAir offers a simple and more reliable signal correction.

HD Radio adoption has accelerated in the automobile industry over the past several years, which has introduced the medium to more consumers.

As consumer interest grows through familiarity, the quality of experience challenges have been magnified. Of these challenges, HD Diversity Delay without question remains the most pressing matter.

HD Diversity Delay represents the time alignment between the analog (FM) and digital (HD Radio) signal. This stems from how receivers capture the analog FM signal initially, and blend it with the HD digital signal.

Problems arise immediately if the analog and digital audio are not precisely matched. On the timing side, the signals blend in and out to create an unpleasant phasing effect. This also produces an amplitude problem, as the blending effect creates artifacts that deliver a multipathlike effect.

In a stationary scenario, this blending would, in most cases, only happen once and be quickly forgotten. For drivers or listeners on the move, it can quickly escalate into a continuous problem as they move through a market, particularly in fringe areas of coverage. This is because the receiver consistently moves in and out of digital mode.

The XPERI codec that processes the HD Radio signal is responsible for the typical eight-second delay.

Those delays can vary in either direction based on networking attributes. For example, E2X 2 (exporter to exgine) traffic moving over a corporate WAN is more likely to be affected by error correction, which will increase network latency. This is because the HD data is traveling a greater distance moving from the exporter to the remote transmitter site.

The longer the path to the transmitter site – and the more network switches signals pass though on the way – the worse the problem. But regardless of the amount of latency and delay, time and level alignment represent the most important parameters to deliver and maintain a pleasant HD Radio experience.

Correction of the Time Alignment issue has evolved from a 100 percent manual approach to increasingly automated processes.

As recent as 2015, most broadcast engineers would make a single adjustment to achieve the proper signal blending, and return to the transmitter site in a week or two to confirm if further adjustments were needed.

The shortcomings of this approach are obvious, and become further amplified for stations with more inconsistent delays. While a manual adjustment may lock in the signals for a period of time, changing network conditions will cause those signals to drift out of synchronization. As more consumers discovered HD Radio, a more dynamic approach to stabile time alignment was needed.

Modulation monitors introduced an automated response to the issue, as leading suppliers developed a way to receive off-air signals and feed information to the exporter.

This process would dynamically and consistently increase or decrease the delay to keep analog and digital signals blended and synchronized. Other devices were subsequently brought to market that would offer similar communication in the air chain.

In either case, this required investment in another component. Beyond equipment costs, it meant adding another piece of equipment to the transmission system that could potentially fail or take the station off the air.

The fourth generation of the HD Radio system, known as Exgine, was designed to better tolerate these network dynamics. However, improvements were still necessary given the unique challenges of the HD Diversity Delay problem.

The arrival of HD Radio introduced two new components to the air chain in the form of the Importer and Exporter.

The Importer is responsible for combining secondary audio and data streams for transport to the Exporter, where the signals are multiplexed and sent into the exciter. In the earliest HD Radio generations, the exporter was located at the transmitter site. Subsequent generations provided more flexible options to locate the Exporter at the studio or transmitter site.

While both setups offered pros and cons – moving the exporter to the studio was typically favored for monitoring purposes – reliability in networking and transport remained a concern. The flexibility of the Exgine architecture has opened doors to simplify the air chain, and combine the Importer and Exporter into a singular platform.

This not only removes the cost of one component, but also eliminates the unreliability of a Windows-based computer.

Since its inception, the HD Radio Importer has been a Windows-based platform, and has suffered from the typical problems associated with keeping drivers up to date, ensuring soundcard compatibility, and managing security updates. 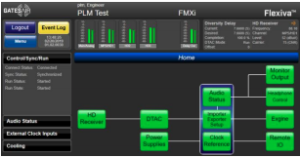 Following discussions with XPERI, GatesAir worked toward a solution to combine Importer and Exporter functionality into a single embedded platform. This eliminated the need for computers and operating systems, as well as all moving parts. This greatly streamlined the architecture from a busy two-box system to a compact and efficient single-box solution that could be placed at the studio or transmitter site, depending on the number of channels and available STL bandwidth.

A second simplification of the architecture would bring further relief to the HD Diversity Delay challenge: Integration of time alignment software within embedded Importer/Exporter platform. GatesAir’s Flexiva FXMi 4g was the result, becoming the industry’s first ImporterExporter to run outside the Windows environment while also automatically solving time alignment within the embedded platform.

The single-embedded solution design has also sought to remove integration headaches, offering a 1RU box that can be dropped into the existing air chain. (For stations without the necessary bandwidth to send secondary channels to distant transmitter sites, the functionality can still be separated into two boxes: an embedded importer and an embedded exporter. )

In either scenario, the automated time alignment functionality remains in the device at the transmitter site. The software program captures and correlates a 10-second audio range, and runs through a series of comparative analyses between the analog and digital signals. The comparisons are repeated until the exact time difference is pinpointed. 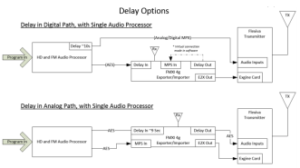 Correction is applied via either a very quick jump or a gradual ramp over a longer period of time, with corrections continuing outside a twosample range.

The program also allows monitoring of program-associated data for synchronization with program audio.

There are other steps that engineers can take to ensure synchronization.

This includes integration of a reliable GPS on both ends of the network (instead of relying on one), and maintaining common audio processors with the same gain levels. Additionally, emerging technology that specializes in reliable data transport over IP networks (like GatesAir’s Intraplex IPConnect) can help to control and smooth the IP connectivity of E2X traffic.

The consumer experience is at the core of HD Radio’s fourth-generation Exgine architecture, with a number of improvements that have a made a difference to mobile audiences.

Kevin Haider is the Product Line Manager at GatesAir. He can be contacted at: Kevin.Haider@gatesair.com