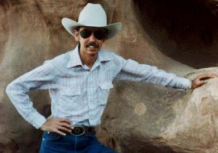 [March 2012] A lot of both audio and data get shoved down the wires each day in a broadcast facility. Curt “Cowboy” Flick continues with his explanation of what is happening between the wires and shields.

Previously we have talked about voltage, current, resistance, and power, and tried to relate these concepts to some easy-to-visualize physical realities – BB’s through a straw, water under pressure in pipes, or water flowing with little or no pressure.

We also touched on the oft-forgotten concept that power is not energy – and energy alone is not power – although they are related, but often mistakenly interchanged.

And while we looked mostly at electrons flowing along a single conductor, we noted that electrons do not just move along a wire.

In this part, we want to explore some additional concepts using these same models.

It turns out that all those electrons in our electricity are smarter than many of us. If they have no destination – and no way to get back home – they simply will not leave the house at all! 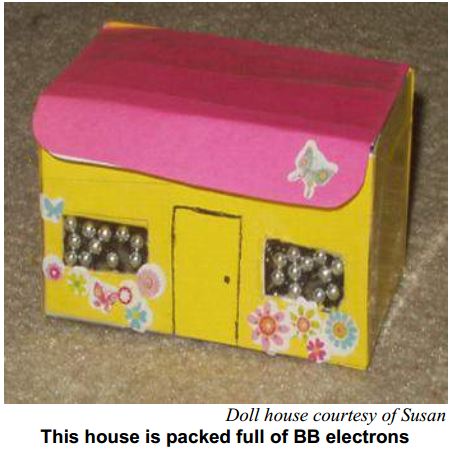 Of course, if the electron family gets too big for the house – or someone throws a party – extra pressure (voltage) will develop, and much as at any home, someone will have to go, even with no particular destination, and no thought of returning back.

The result, again just like our own homes, usually is catastrophic. 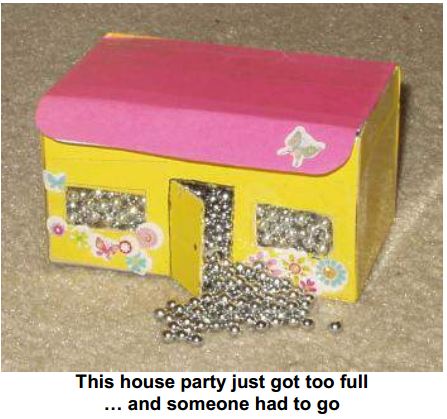 Often, all this excess voltage tends to cause a release of the factory-installed smoke in various components, and those components will cease to function normally.

Lightning is a practical example of something that may bring too many electrons into a house.

During a lightning storm a cloud accumulates electrons and ions through air currents shuffling things around. When too many electrons have come together, the lightning bolt crackles between earth and the sky to let some of the electrons move around.

Nearly all of us are familiar with what happens when some of those excess electrons are told to vacate immediately, with no specific destination: eventually it causes one or more components to let their smoke leak out. Fast. 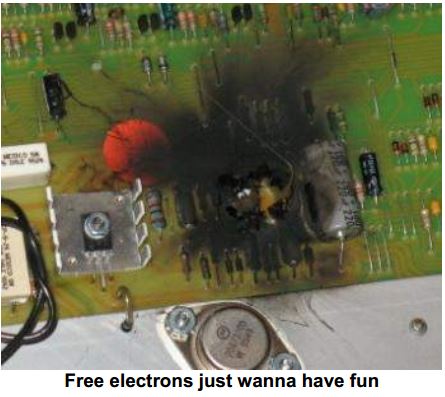 On the other hand, electrons will behave in a much more orderly fashion when they are given some destination such as the final amplifier in a transmitter or a speaker in a sound system and they are given a way to get back home. They will venture out and make the complete circuit.

We do need a return conductor of some sort, through some path, to get our electrons from the termination back to the source. It is the effect that does work, not the balls themselves. 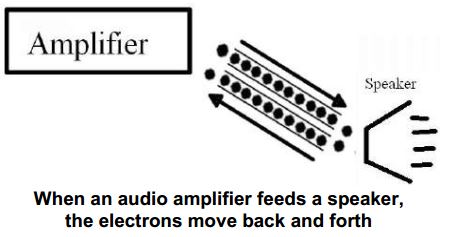 We can source electrons from any of various sources: adding voltage energy with a battery or some other power supply, from a return line through a power supply to keep them moving, or, simply, the ground. Then, another wire coming back from the termination to the source functions in exactly the same way.

As you can see, our electrons (or the BB’s) are traveling in a loop. Each being replenished as it is shoved into the tube, from either end. Lots of balls moving back and forth, but in a closed loop returning to the power supply in every case. Remember, it is the effect that does work, not the electrons themselves.

Our power supply can be a battery, an electrochemical source, a capacitor, an electrostatic source which functions in many, many respects just like a battery with a very small capacity by comparison, or a generator, a mechanical device that converts energy from one form (mechanical) to another (electrical) or any of a number of devices and methods commonly referred to as a power supply.

They Have to Go Somewhere

The important concept here is that the electrons will generally not move – and no current will flow – unless there is a return path of some sort.

That path can be one that is not balanced – such as a common return through the earth, the equipment chassis, a conductor that is part of another circuit such as the AC power line, or some random combination of these – or one that is balanced – wherein a conductor is specifically provided to conduct our electrons back home to the power source from whence they originated.

Balanced wires are said to have the same impedance with respect to the universe, and/or anything and everything in it.

Typically understood, a balance exists when the two sides of the circuit carry a signal of equal amplitude, but opposite phase with respect to a common reference.

But Not Everything Is Balanced

If, for the sake of illustration, the balls themselves are made of iron, or steel such as our BB illustrations, and one of our conductor tubes paths passes close to a magnet, we will have another affect to overcome.

Since only one of our wires is close to – and therefore affected by – the magnet, we have an unbalanced circuit.

Electronically, it takes a different amount of energy to get the balls to move, and transfer the effect of that movement, through one of the wires more than the other.

In practice, what we see is a single wire carrying a signal against “ground” or a common chassis path. And as such each is affected somewhat differently by the universe than is the other – creating an imbalance in the energy needed to get the balls to move within the tube, or along the wire.

Balance is defined as the “Z” of the conductor against the universe.

Typically, we see signals on two wires, of opposite polarity ( or opposite voltage) and the balls (electrons) moving in opposite directions on those two wires, and we mistakenly call this “balanced.” It is balanced signal, but the circuit itself is not necessarily balanced against the universe.

Some manufacturers like to cheap-out, and use a single ended driver, tying the other conductor to a resistor. This is “technically” balanced as both conductors do have the same impedance as measured against common (or the universe), but the signal is not balanced at all.

So, when we say balanced it is important to understand: balanced against what? Using the same word to mean different things does not help aid understanding, though it might aid sales.

So, referring to the above picture with our magnet near(er) one of the wires than the other, how can we balance this circuit so that both conductors do have the same impedance with respect to the universe?

Commonly, this is done by twisting the wire pair. If the twists are tight enough, and the magnet far enough away, the result is that, on average, both conductors are affected by the magnet in the same way, and by the same amount. 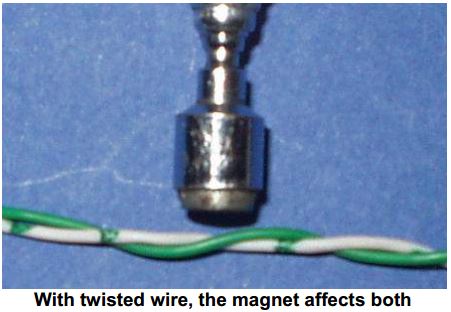 As a result, we say that twisted pair wiring is balanced and, as such, inherently provides self-shielding. It is self-shielding in that there will be no affect on one wire greater than the affect on the other, and so will cancel out. The part that is not canceled is carried equally on both conductors, and in the same physical direction relative to the magnet.

Because the effect is caused equally in common on both conductors, this is called the common mode. It is a very definite signal with respect to the magnet, relative to either, or both, conductors, but is not relevant at all one conductor to the other.

The signal itself is always the difference between the instantaneous charge on one conductor relative to the other. It matters not whether the circuit is “balanced,” or not.

This is how unbalanced audio lines work. The shield assumes the charge “ground” (and with whatever noises, buzzes, and clicks are in or on “ground”) and the signal is the difference between the signal wire, (hopefully without buzzes, hum, and clicks) and ground.

By the way the circuit need not be wired with shielded wire to be unbalanced. It is only necessary is for the conductors to have a different impedance with respect to the universe. Since the chassis itself can be one of the conductors, this should be relatively easy to visualize.

Conversely, a single shielded wire cannot be balanced! The shield itself prevents the inner conductor(s) from having the same impedance to the universe as the outside of the shield does. By shielding wire, we usually make the problems of buzzes, clicks, and noise worse.

There are two exceptions, and we will discuss them in our final installment.

Curt “Cowboy” Flick is a broadcast engineer, based in Akron, OH. He is experienced in everything from computers and studio inputs to tower climbing and maintenance. You can contact him at curt@spam-o-matic.com