[December 2019] Broadcast transmitters truly are the heart of the whole enterprise. Without a solid, reliable transmitter, no station can be successful. But there are a lot of well-designed transmitters out there, still operating well past their expected life-span.

“If it ain’t broke, don’t fix it” may not be the appropriate saying when it comes to your station’s trusty old tube transmitter.

Over the years, you may have cared for it well, keeping it clean, changing tubes and other parts as they age, so that when the “Plate On” button is pushed, it works. But, even if you are diligent about maintenance, you need to be alert to the indications warning that now is the time you should soon be acquiring a modern solid-state unit.

There are several such signs.

Parts are Hard to Find and Pricing is Inconsistent.

New tubes simply are not as easily found these days, and the rebuilt tube market can be sporadic both in terms of availability and in what you will pay.

Furthermore, when the price for a tube can vary from $1,600 to over $5,000, it is hard to budget accordingly. That goes, not only the tubes, but other components are becoming more and more difficult to source, at any price.

Some tube sockets, plate transformers, control boards, even some of the bypass caps and diode stacks are becoming a rare commodity. As the products are already end-of-life, the manufacturers – if they still are in business – may have only a handful of parts left with no intention of another production run.

Not long ago, a new tube that was cared for properly could expect to perform for around 50,000+ hours of reliable performance.

Now the projected life of a tube is averaging 10,000 hours (and often less) under the same care. Again, this can seriously impact your station’s maintenance budget.

And if you are a contract engineer (as many of you are) you may find yourself having to explain, again and again, why you are having to go to the transmitter site more often to keep the station on the air. (Or, you have to schedule an emergency visit to a customer’s site yet again because a rebuilt tube failed, and have to again explain to the GM that rebuilt tubes are not as reliable these days).

Some engineers are even ordering multiple tubes at the same time now just to ensure they can successfully change to a working unit, as some tubes simply will not “tune up” in a given transmitter.

Many Engineers are “Aging Out”

It is a fact – uncomfortable but true – that as the older engineers are retiring, the younger ones simply do not know how to work with tubes.

Safely removing tubes, scrubbing out cavities, replacing sockets, testing, and sourcing replacement parts as needed can be a mystery to engineers who never studied a tube in school, much less worked with one.

Here is a photo of Hartman turning a tube transmitter back on with a wooden broom handle after cleaning snow out of the transmitter and drying everything off (“long story,” he says). He says “This particular 20 kW transmitter runs at about 8500 Vols with 2.5 Amps across the plate. If it’s unhappy, it goes BANG very loudly and you don’t want to be right in front of it at the time.”

Granted, solid-state units can also be dangerous if not treated with respect (make sure you always follow safety protocols!), but Hartman points out that when a power module goes out on a solid state transmitter, you do not typically have an off-air situation with an emergency trip to the transmitter during a holiday dinner – you are just operating at lower power until the module gets replaced.

In fact, most solid-state transmitters permit the “hot-swapping” of modules so you probably will not need to go off the air at all.

Putting everything back together for ‘newbies’ can be tricky, too.

Hartman also provided this photo of a tube plate blocker that was seated improperly by someone inexperienced with this type of transmitter.

The blocker stack ended up arcing over.

Site access to this particular transmitter was on top of a ski mountain. Not only were two trips required up the mountain to diagnose the problem and fix it, but it was months between visits because site access is restricted or unavailable in the winter months – which presents a whole different danger to the job at hand.

It is probable that right now there are people who can deal with problems like this (most likely you) – but at some point you are going to say “No!” when your old station’s GM asks you to come out of retirement “one more time” to help with the transmitter.

If you are approaching retirement age, now would be a good time to remind the GM that your replacement may not have the skills needed to keep the tube transmitter operational. 3 Education is key in this industry to keep everything running, new and old.

Power Bills Are Not Going Down

A great way to save money on power bills at the transmitter site is to replace the tube transmitter with a solid-state unit.

The amount of money that can be saved both on lower kWh usage by the transmitter and reduced air conditioning costs can help pay for the new transmitter – sometimes very quickly. Nautel has a handy tool for calculating power savings when switching from a tube transmitter to a new solid-state unit; it is available at: https://www.nautel.com/cost-of-operation/. 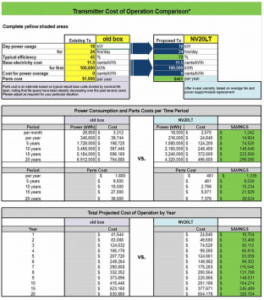 In this example, the base electricity cost used is 11.5 cents per kWh. That may be higher than your rate, but it is a standard rate in some markets. Note that the first year savings of $16,704 = $1392 per month.

Some power companies offer credits or even financial help for replacing “power hogs” with more efficient units. But before taking this argument to your GM, check with your power company to see what assistance they may be willing to offer.

As an example, one station that switched recently from a Continental to a Nautel NV20LT reported a 20% reduction in power use just in the first few weeks of operation. They noted some of that reduction could be weather related but they plan to monitor things closely in the coming months, optimistic that their power bill will be considerably lower over time.

While some tube transmitters are HD capable, drift, severe efficiency deficits, and other issues may keep them from operating the way you would like.

Most stations using tubes are not operating in, or are not able to take advantage of digital operation. In contrast, many solid-state units are shipped in HD-ready mode; others are easily field-upgradable to HD.

The best time to retire a tube transmitter is while it is still working.

Engineers may have a tough job here, especially since you are technically minded and have to focus on financial aspects to sell management on why a new transmitter is needed.

Be prepared with hard numbers, a solid foundation on reasoning, and most of all, the cost savings to the station.

Selling your managers on a new transmitter can be a difficult job, but if it makes sound financial sense, many times managers will make it a priority in their budget cycle.

One of the reasons you should present is that a still-functional tube transmitter can be assigned “backup” status at the transmitter site.

Hartman notes that you will periodically want to fire up the tube transmitter as tubes can gas up with disuse and quickly become inoperable.

He suggests you fire up the old tube transmitter during quarterly maintenance visits and run it for the hour or two that you will be on site. You could either run it into a dummy load or put it on-air – but if it goes on-air you might have to take the HD channels down for a couple hours, so coordinate these operational periods with station management.

Alex Hartman works in the Nautel Customer Service group. Elaine Jones is Nautel’s publiccist. She lives in Tucson, Arizona and yet somehow never manages to get together with Barry Mishkind for coffee. Her contact information is elaine@ejonespr.com