[September 2015] As broadcasters steadily automate more and more of their broadcast day, finding a good place to learn the trade can be hard to find. Pueblo Magnet High School in Tucson not only has a solid broadcast program, they use their LPFM station to give their students real on-air experience.

2015 may be remembered as The Year LPFM Happened. Around the country, local groups, schools, and churches are scrambling to build out LPFM stations won in the last Window, seeking to arrange equipment, personnel – and the money – to operate. 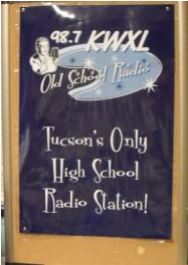 These new stations could well take a lesson from KWXL-LP, the only High School broadcasting station in Tucson, Arizona.

Based at the Pueblo Magnet High School, the station has been up and running now for ten years, serving the community around the school while teaching the students about the business of broadcasting.

The path has not always been easy. School finances are stretched everywhere these days. So when something breaks, funds are not always at hand to repair or replace the equipment.

On the other hand, the value to the community and the broadcast industry is easy to see. As a result, some broadcast companies have come to the aid of stations like KWXL.

Teacher/advisor Doug Potter constructed a plan some 20 years ago to help develop interest in broadcasting among Pueblo High’s students. He started with a micro AM transmitter and a tiny budget. Warrior Radio (1660) allowed the students to actually go on the air, broadcasting to the local neighborhoods, where their peers lived. The station quickly proved to be popular and was a real asset to the school.

Of course, the first thing everyone desired was more power – and an FM signal.

Potter filed paperwork with the Federal Communications Commission and, in March 2005, the FCC awarded the Tucson Unified School District a CP for KWXL-LP, an LP100 on 98.7 MHz. After getting the station on the air, Potter retired in 2006.

The new KWXL coverage increased the station’s reach substantially with a clearer signal on FM, showing clearly what an LFPM can do. Many students and parents became regular listeners.

Turning out young broadcasters is no easy task. The dual challenges of working with a limited budget, yet trying to meet the high expectations for the students require the teacher/advisor to plan carefully. 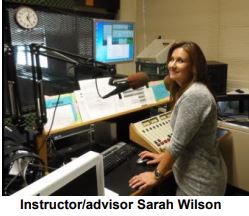 At Pueblo High each year about 100 students take the classes offered by the current instructor/advisor, Sarah Wilson.

The classes emphasize the various aspects of preparing and delivering broadcast programming from writing good copy to on-air announcing and news reading. What is especially exciting for the students is that all of them get the chance to individually go on the air and learn how to properly utilize the microphone and other broadcast tools as they deliver their programs.

Around 70 Beginning Broadcasting students spend their first semester learning the basics of journalism and broadcast style, production, and DJ’ing. They then do live shows, just like the advanced students, throughout the second semester.

In order to make sure all have a full opportunity to understand and learn how broadcasting works, every student gets to be on-the-air in three different capacities:

By the end of the first semester, the hard-working students are providing live programming throughout the majority of the school day, Monday through Friday.

The 36 Advanced Broadcasting students do a show during their respective class period Monday through Friday.

Their shows include student-selected and student-produced programming, which means that they choose the music, they choose and produce a game or segment to play with their audience, and then they read the news stories they have written during the class period.

The news runs at the end of the class period, so that students have the length of the period to do their rewrites for the day’s events. This deadline helps them to learn how to quickly build and deliver clear information to the listening audience.

Knowing that students and parents are listening means the station and students must be serious about their programming. Wilson provides continuing oversight as the students practice, practice, and practice some more, to improve their on-air presentations.

The music format chosen for KWXL focuses primarily on oldies from the 1960’s to the 1990’s. While the music may be older than the students, it does ring well with the parents. The music is delivered by a live-assist automation program that can also run after school and overnight, to keep the music flowing.

Of course, the sound and signal need to be the best possible in order to ensure the station sounds as “professional” as possible, both to attract listeners as well as permit the students to have full pride in their efforts. Until recently KWXL was a bit “soft” on the air, as budgetary issues prevented acquiring an audio processor or regular engineering help. Modulation levels were somewhat haphazard.

The audio problem was cured by the generous donation of an Orban Optimod 5500 Digital Audio Processor from Jay Brentlinger, President of Orban in Scottsdale, AZ. Now, KWXL can stand head and shoulders with all the other signals in the market.

Immediately upon installation, listeners noticed that KWXL began putting out louder, brighter, processsed audio that helped the LPFM station to carry a stronger signal out to its full potential coverage.

Over the years several KWXL graduates have gone on work in local radio or moved on to other advanced training.

iHeart Media morning show producer Obi-Wan Kenobi graduated from the Pueblo High program back in the 90s and Kathy Herrera, who graduated in ’08, currently DJs and does Board Operations at iHeart Media. A number of other students have gone on to study communications at the Cronkite School up at ASU, moving into careers in journalism as they graduate.

Other opportunities continue to come for KWXL students. The station holds a quarterly Career Fair that has attracted interest from several local stations. Community station KXCI sent several members down to talk to the Pueblo High students and offer internships. Occasionally, DJ’s from other stations also stop by to encourage the students, inviting them to visit them and see what their studios are like.

KWXL officially may be a Low Power station but visitors can see the education provided is definitely running at full power.