[June 2015] Communication between talent and operator can be a challenge – sometimes there is information that needs to get to the talent, but you just do not want to risk letting it get on the air. Burt Weiner reports on a new product to make this task easier.

In addition to the RF work that I do, I also do a lot of remotes for radio stations as well as networks.

One of the biggest issues that I find is the gyrations that many stations and networks go through in order to talk back and cue during a remote broadcast.

Talk Back Should be Simple

One of the most common talkback methods is where a station will use the audition buss to create the mix-minus feed towards the remote.

This works, but in order to talk back to the remote, many stations have to take the control room microphone out of Program, put it in Audition, push the fader up, and then turn the microphone module on, which also mutes the control room monitor and cue speaker. This does work, but it is really cumbersome for the board operator to do all this every time he needs to talk to the remote.

The obvious reason is that the board operators were not switching their microphone between program and audition when they should. However, in defense of the board operators, they generally have a gazillion things going on around them, and this is just another distraction piled on them.

I felt that there needed to be a simple and inexpensive box that meets the requirements for an IFB / Remote Talkback system that is simple to interface at the studio end, and would be intuitive and become second nature for the board operator to use.

I intellectualized over this with my longtime friend, Dave Mandelbaum at DM Engineering. I gave Dave the specifics of what I thought the “IFB Box” should do and even made suggestions of how “it” should do it.

Dave, being an old-time Remote Engineer understood exactly what I wanted and a few weeks later Dave presented me with the prototype of the “IFB Box,” or as Dave prefers to call it, the “IFB Controller.” 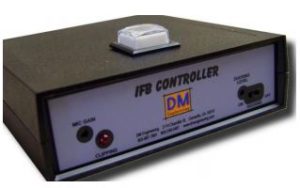 The theory of operation is fairly simple, and is based on years of experience in building and operating studios. Case in point: many years ago, when ISDN was young, Craig Robbins and I were commissioned to re-build a studio for a local foreign language AM station.

The station was planning on doing a lot of remotes and we needed to make it as simple as possible. The board was a Pacific Recorders with only Program and Audition busses, appropriate assignment buttons for each source, and a hard-wired Utility buss which was dedicated to the on-air phone system.

We felt that non-technical board operators were going to have a problem doing all the associated control room microphone switching for remote talkback. But … we had the opportunity to make it simple.

Creating a mix-minus was no problem; push in all the Audition buttons, and then push the Audition assignment button for the ISDN/remote fader to off. Craig and I installed a distribution ampflier with its input bridging the patch jumpers at the output of the Control Room microphone-preamp in the console.

We fed the normally closed side of a double-pole, double-throw relay from the audition buss, and the normally open side from one of the outputs of the distribution amp. Between the arms of the relay and the input of the ISDN equipment we installed a gated audio processor so that the levels going towards the remote would be consistent.

We then installed a large green “Talkback” button on the top left edge of the console to key the relay. This was great and the board operators and talent caught onto this in about 1 second – it was intuitive. Apparently Craig and I had built something rather unique in its simplicity.

In producing the IFB Controller, Dave has come up with an elegant design. 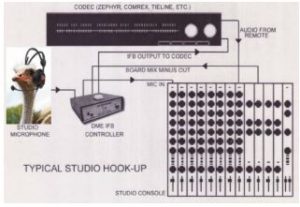 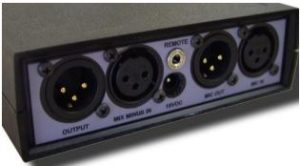 Then run an XLR cable from the IFB Controller “Output” to the mix-minus, or “send audio input” of your codec. Plug in the included wall-wart power supply.

Once you set the microphone gain to properly drive the codec, and use the desired amount of “ducking” – which can be set anywhere between no ducking to completely muting the mix-minus send feed – you are set to go.

I also carry a DME IFB Controller for remotes. Quite often I will have someone roaming with a wireless microphone and head-set, and I or the producer needs to talk to them without going into other talent’s earphones. 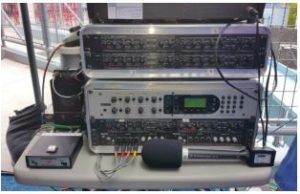 As I mentioned earlier, the IFB Controller has a connector for remote control. This allows you to put the IFB Box anywhere you want and control it from anywhere you want, all you need is a contact closure.

In my opinion the IFB Controller is the best thing to come along since sliced bread, and it comes in at under $200.00 including the power supply.

Burt I. Weiner Associates has been serving the Los Angeles broadcast community for many years. His web page is: www.biwa.cc